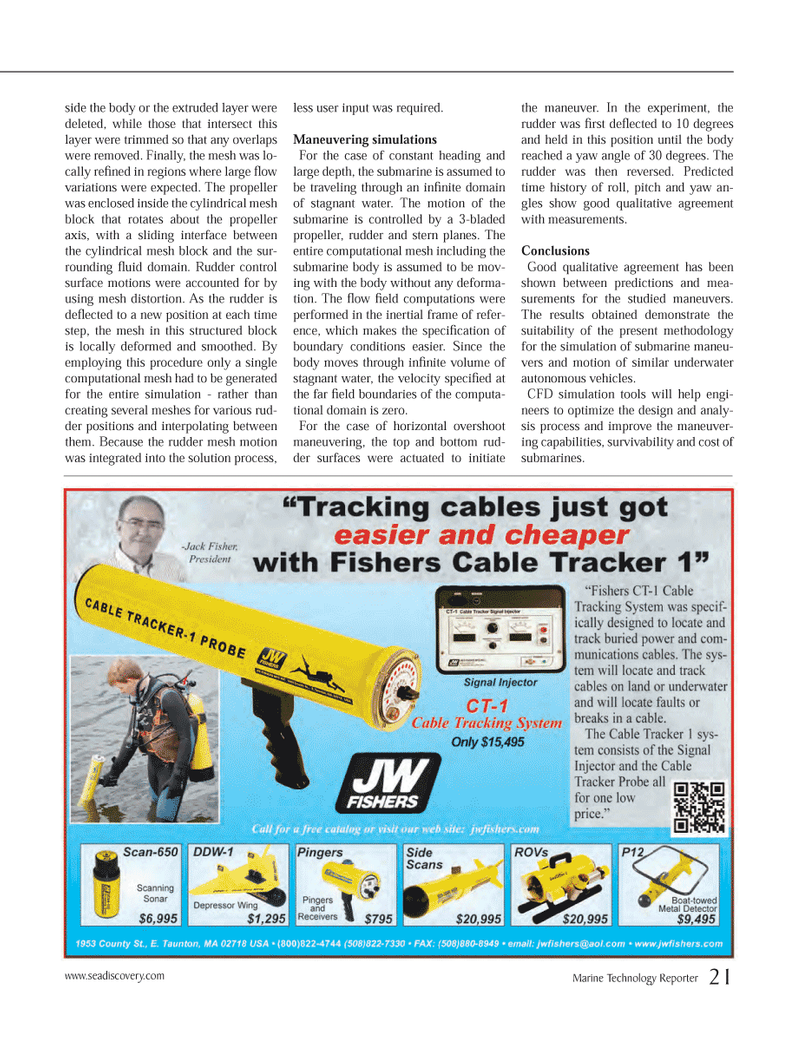 side the body or the extruded layer were deleted, while those that intersect this layer were trimmed so that any overlaps were removed. Finally, the mesh was lo- cally reÞ ned in regions where large ß ow variations were expected. The propeller was enclosed inside the cylindrical mesh block that rotates about the propeller axis, with a sliding interface between the cylindrical mesh block and the sur- rounding ß uid domain. Rudder control surface motions were accounted for by using mesh distortion. As the rudder is deß ected to a new position at each time step, the mesh in this structured block is locally deformed and smoothed. By employing this procedure only a single computational mesh had to be generated for the entire simulation - rather than creating several meshes for various rud- der positions and interpolating between them. Because the rudder mesh motion was integrated into the solution process, less user input was required. Maneuvering simulations For the case of constant heading and large depth, the submarine is assumed to be traveling through an inÞ nite domain of stagnant water. The motion of the submarine is controlled by a 3-bladed propeller, rudder and stern planes. The entire computational mesh including the submarine body is assumed to be mov- ing with the body without any deforma- tion. The ß ow Þ eld computations were performed in the inertial frame of refer- ence, which makes the speciÞ cation of boundary conditions easier. Since the body moves through inÞ nite volume of stagnant water, the velocity speciÞ ed at the far Þ eld boundaries of the computa-tional domain is zero.For the case of horizontal overshoot maneuvering, the top and bottom rud- der surfaces were actuated to initiate the maneuver. In the experiment, the rudder was Þ rst deß ected to 10 degrees and held in this position until the body reached a yaw angle of 30 degrees. The rudder was then reversed. Predicted time history of roll, pitch and yaw an- gles show good qualitative agreement with measurements.ConclusionsGood qualitative agreement has been shown between predictions and mea- surements for the studied maneuvers. The results obtained demonstrate the suitability of the present methodology for the simulation of submarine maneu-vers and motion of similar underwater autonomous vehicles. CFD simulation tools will help engi-neers to optimize the design and analy-sis process and improve the maneuver- ing capabilities, survivability and cost of submarines. Marine Technology Reporter 21www.seadiscovery.com MTR #1 (18-33).indd 21MTR #1 (18-33).indd 211/23/2014 10:16:56 AM1/23/2014 10:16:56 AM