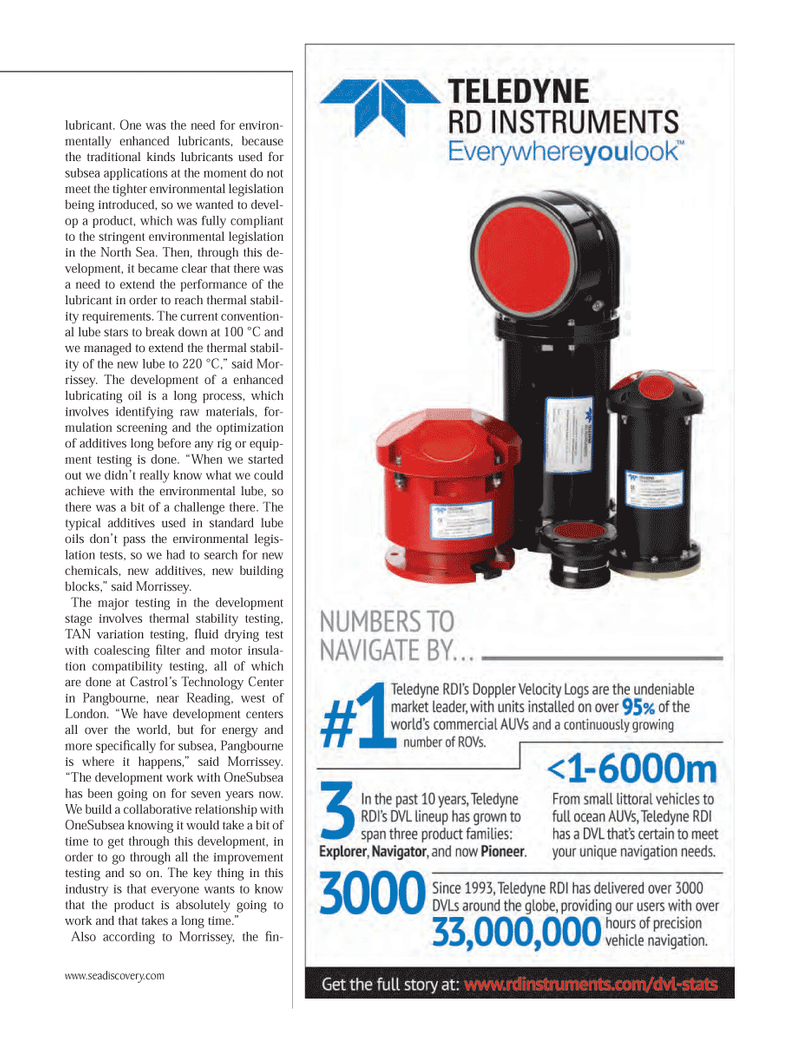 lubricant. One was the need for environ- mentally enhanced lubricants, because the traditional kinds lubricants used for subsea applications at the moment do not meet the tighter environmental legislation being introduced, so we wanted to devel- op a product, which was fully compliant to the stringent environmental legislation in the North Sea. Then, through this de- velopment, it became clear that there was a need to extend the performance of the lubricant in order to reach thermal stabil-ity requirements. The current convention- al lube stars to break down at 100 °C and we managed to extend the thermal stabil- ity of the new lube to 220 °C,? said Mor- rissey. The development of a enhanced lubricating oil is a long process, which involves identifying raw materials, for- mulation screening and the optimization of additives long before any rig or equip- ment testing is done. ?When we started out we didn?t really know what we could achieve with the environmental lube, so there was a bit of a challenge there. The typical additives used in standard lube oils don?t pass the environmental legis- lation tests, so we had to search for new chemicals, new additives, new building blocks,? said Morrissey. The major testing in the development stage involves thermal stability testing, TAN variation testing,  uid drying test with coalescing  lter and motor insula- tion compatibility testing, all of which are done at Castrol?s Technology Center in Pangbourne, near Reading, west of London. ?We have development centers all over the world, but for energy and more speci cally for subsea, Pangbourne is where it happens,? said Morrissey. ?The development work with OneSubsea has been going on for seven years now. We build a collaborative relationship with OneSubsea knowing it would take a bit of time to get through this development, in order to go through all the improvement testing and so on. The key thing in this industry is that everyone wants to know that the product is absolutely going to work and that takes a long time.? Also according to Morrissey, the  n-www.seadiscovery.com MTR #1 (18-33).indd 23MTR #1 (18-33).indd 231/24/2014 2:23:09 PM1/24/2014 2:23:09 PM