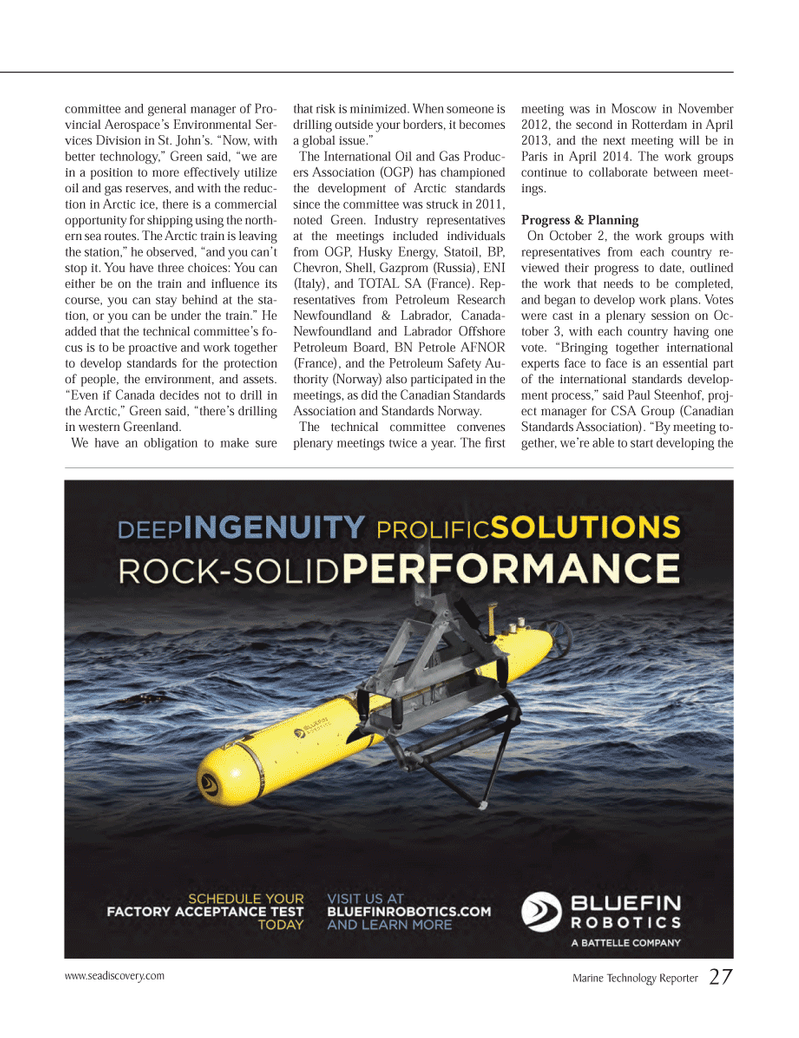 committee and general manager of Pro-vincial Aerospace?s Environmental Ser- vices Division in St. John?s. ?Now, with better technology,? Green said, ?we are in a position to more effectively utilize oil and gas reserves, and with the reduc- tion in Arctic ice, there is a commercial opportunity for shipping using the north-ern sea routes. The Arctic train is leaving the station,? he observed, ?and you can?t stop it. You have three choices: You can either be on the train and in uence its course, you can stay behind at the sta-tion, or you can be under the train.? He added that the technical committee?s fo- cus is to be proactive and work together to develop standards for the protection of people, the environment, and assets. ?Even if Canada decides not to drill in the Arctic,? Green said, ?there?s drilling in western Greenland. We have an obligation to make sure that risk is minimized. When someone is drilling outside your borders, it becomes a global issue.? The International Oil and Gas Produc-ers Association (OGP) has championed the development of Arctic standards since the committee was struck in 2011, noted Green. Industry representatives at the meetings included individuals from OGP, Husky Energy, Statoil, BP, Chevron, Shell, Gazprom (Russia), ENI (Italy), and TOTAL SA (France). Rep- resentatives from Petroleum Research Newfoundland & Labrador, Canada- Newfoundland and Labrador Offshore Petroleum Board, BN Petrole AFNOR (France), and the Petroleum Safety Au- thority (Norway) also participated in the meetings, as did the Canadian Standards Association and Standards Norway. The technical committee convenes plenary meetings twice a year. The  rst meeting was in Moscow in November 2012, the second in Rotterdam in April 2013, and the next meeting will be in Paris in April 2014. The work groups continue to collaborate between meet-ings. Progress & Planning On October 2, the work groups with representatives from each country re- viewed their progress to date, outlined the work that needs to be completed, and began to develop work plans. Votes were cast in a plenary session on Oc-tober 3, with each country having one vote. ?Bringing together international experts face to face is an essential part of the international standards develop- ment process,? said Paul Steenhof, proj- ect manager for CSA Group (Canadian Standards Association). ?By meeting to- gether, we?re able to start developing the Marine Technology Reporter 27www.seadiscovery.com MTR #1 (18-33).indd 27MTR #1 (18-33).indd 271/23/2014 10:19:59 AM1/23/2014 10:19:59 AM