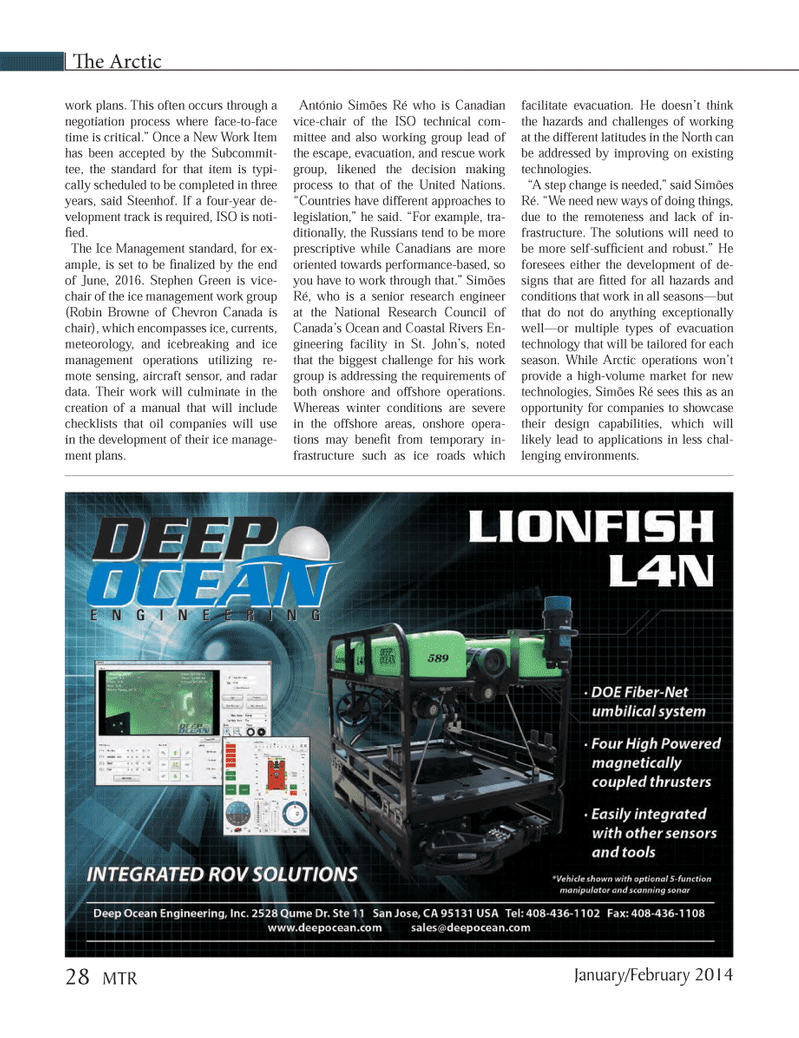 work plans. This often occurs through a negotiation process where face-to-face time is critical.? Once a New Work Item has been accepted by the Subcommit-tee, the standard for that item is typi-cally scheduled to be completed in three years, said Steenhof. If a four-year de- velopment track is required, ISO is noti-  ed.The Ice Management standard, for ex- ample, is set to be  nalized by the end of June, 2016. Stephen Green is vice-chair of the ice management work group (Robin Browne of Chevron Canada is chair), which encompasses ice, currents, meteorology, and icebreaking and ice management operations utilizing re-mote sensing, aircraft sensor, and radar data. Their work will culminate in the creation of a manual that will include checklists that oil companies will use in the development of their ice manage- ment plans.António Simões Ré who is Canadian vice-chair of the ISO technical com-mittee and also working group lead of the escape, evacuation, and rescue work group, likened the decision making process to that of the United Nations. ?Countries have different approaches to legislation,? he said. ?For example, tra- ditionally, the Russians tend to be more prescriptive while Canadians are more oriented towards performance-based, so you have to work through that.? Simões Ré, who is a senior research engineer at the National Research Council of Canada?s Ocean and Coastal Rivers En- gineering facility in St. John?s, noted that the biggest challenge for his work group is addressing the requirements of both onshore and offshore operations. Whereas winter conditions are severe in the offshore areas, onshore opera- tions may bene t from temporary in- frastructure such as ice roads which facilitate evacuation. He doesn?t think the hazards and challenges of working at the different latitudes in the North can be addressed by improving on existing technologies.?A step change is needed,? said Simões Ré. ?We need new ways of doing things, due to the remoteness and lack of in-frastructure. The solutions will need to be more self-suf cient and robust.? He foresees either the development of de- signs that are  tted for all hazards and conditions that work in all seasons?but that do not do anything exceptionally well?or multiple types of evacuation technology that will be tailored for each season. While Arctic operations won?t provide a high-volume market for new technologies, Simões Ré sees this as an opportunity for companies to showcase their design capabilities, which will likely lead to applications in less chal- lenging environments.  e Arctic 28 MTRJanuary/February 2014 MTR #1 (18-33).indd 28MTR #1 (18-33).indd 281/27/2014 9:52:46 AM1/27/2014 9:52:46 AM