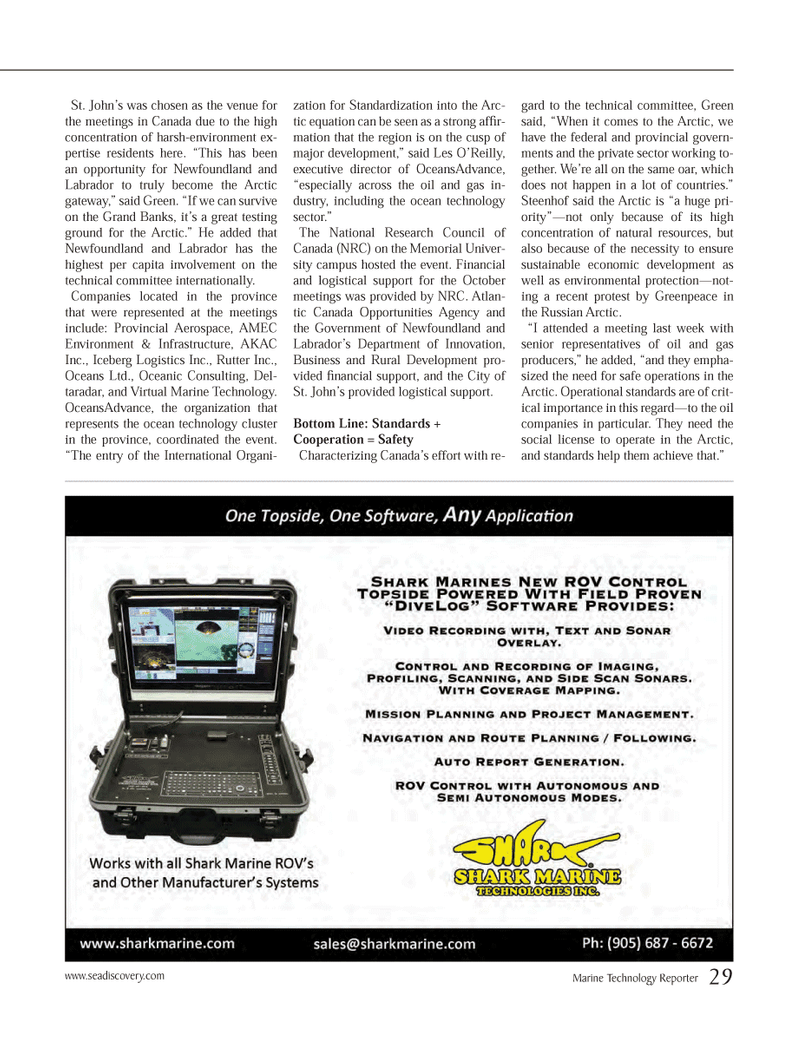 St. John?s was chosen as the venue for the meetings in Canada due to the high concentration of harsh-environment ex- pertise residents here. ?This has been an opportunity for Newfoundland and Labrador to truly become the Arctic gateway,? said Green. ?If we can survive on the Grand Banks, it?s a great testing ground for the Arctic.? He added that Newfoundland and Labrador has the highest per capita involvement on the technical committee internationally. Companies located in the province that were represented at the meetings include: Provincial Aerospace, AMEC Environment & Infrastructure, AKAC Inc., Iceberg Logistics Inc., Rutter Inc., Oceans Ltd., Oceanic Consulting, Del-taradar, and Virtual Marine Technology. OceansAdvance, the organization that represents the ocean technology cluster in the province, coordinated the event. ?The entry of the International Organi- zation for Standardization into the Arc- tic equation can be seen as a strong af r-mation that the region is on the cusp of major development,? said Les O?Reilly, executive director of OceansAdvance, ?especially across the oil and gas in-dustry, including the ocean technology sector.? The National Research Council of Canada (NRC) on the Memorial Univer- sity campus hosted the event. Financial and logistical support for the October meetings was provided by NRC. Atlan- tic Canada Opportunities Agency and the Government of Newfoundland and Labrador?s Department of Innovation, Business and Rural Development pro- vided  nancial support, and the City of St. John?s provided logistical support. Bottom Line: Standards + Cooperation = SafetyCharacterizing Canada?s effort with re- gard to the technical committee, Green said, ?When it comes to the Arctic, we have the federal and provincial govern- ments and the private sector working to- gether. We?re all on the same oar, which does not happen in a lot of countries.? Steenhof said the Arctic is ?a huge pri- ority??not only because of its high concentration of natural resources, but also because of the necessity to ensure sustainable economic development as well as environmental protection?not- ing a recent protest by Greenpeace in the Russian Arctic. ?I attended a meeting last week with senior representatives of oil and gas producers,? he added, ?and they empha- sized the need for safe operations in the Arctic. Operational standards are of crit-ical importance in this regard?to the oil companies in particular. They need the social license to operate in the Arctic, and standards help them achieve that.? Marine Technology Reporter 29www.seadiscovery.com MTR #1 (18-33).indd 29MTR #1 (18-33).indd 291/23/2014 10:35:14 AM1/23/2014 10:35:14 AM