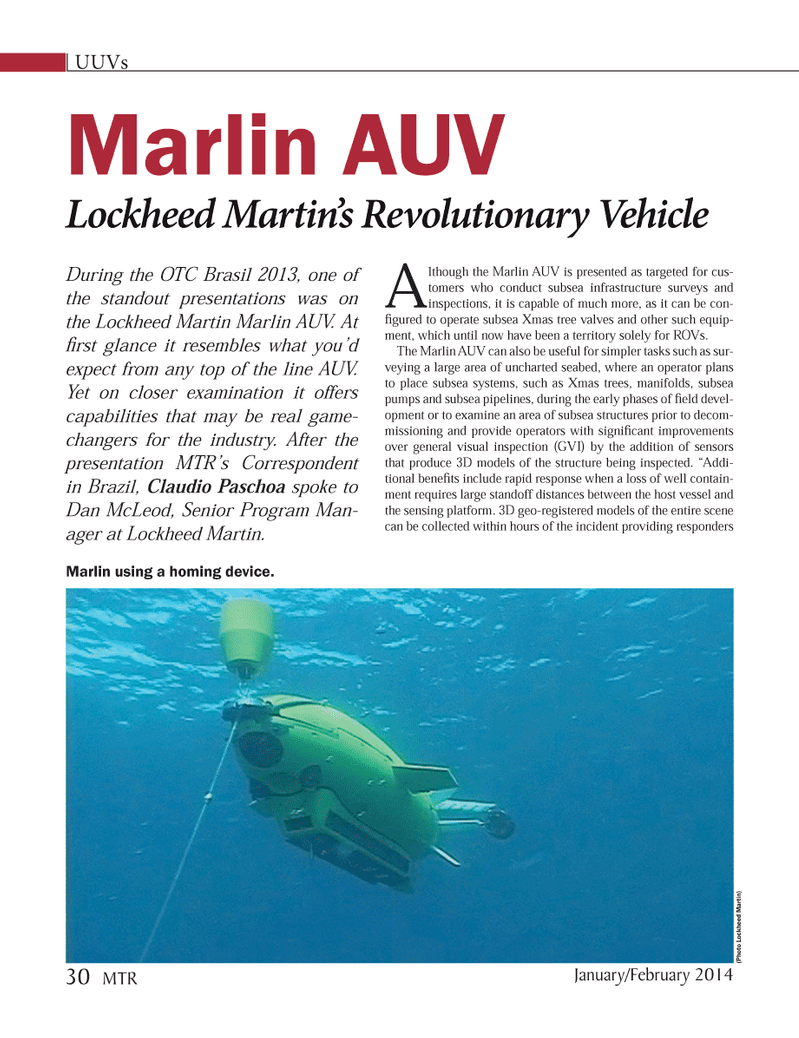 UUVsAlthough the Marlin AUV is presented as targeted for cus- tomers who conduct subsea infrastructure surveys and inspections, it is capable of much more, as it can be con-Þ gured to operate subsea Xmas tree valves and other such equip- ment, which until now have been a territory solely for ROVs. The Marlin AUV can also be useful for simpler tasks such as sur- veying a large area of uncharted seabed, where an operator plans to place subsea systems, such as Xmas trees, manifolds, subsea pumps and subsea pipelines, during the early phases of Þ eld devel- opment or to examine an area of subsea structures prior to decom- missioning and provide operators with signiÞ cant improvements over general visual inspection (GVI) by the addition of sensors that produce 3D models of the structure being inspected. ÒAddi- tional beneÞ ts include rapid response when a loss of well contain- ment requires large standoff distances between the host vessel and the sensing platform. 3D geo-registered models of the entire scene can be collected within hours of the incident providing responders Marlin AUV Lockheed Martin?s Revolutionary Vehicle During the OTC Brasil 2013, one of the standout presentations was on the Lockheed Martin Marlin AUV. At Þ rst glance it resembles what youÕd expect from any top of the line AUV. Yet on closer examination it offers capabilities that may be real game- changers for the industry. After the presentation MTRÕs Correspondent in Brazil, Claudio Paschoa spoke to Dan McLeod, Senior Program Man- ager at Lockheed Martin. Marlin using a homing device. (Photo Lockheed Martin) 30 MTRJanuary/February 2014 MTR #1 (18-33).indd 30MTR #1 (18-33).indd 301/23/2014 10:21:04 AM1/23/2014 10:21:04 AM