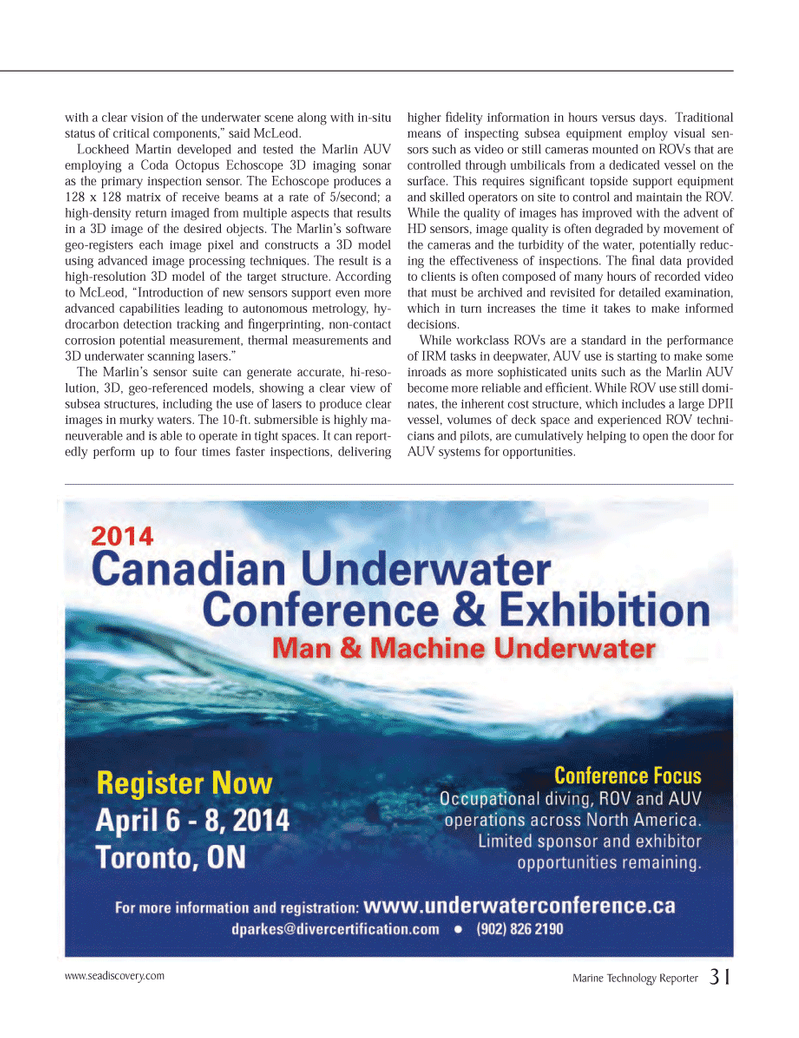 with a clear vision of the underwater scene along with in-situ status of critical components,? said McLeod. Lockheed Martin developed and tested the Marlin AUV employing a Coda Octopus Echoscope 3D imaging sonar as the primary inspection sensor. The Echoscope produces a 128 x 128 matrix of receive beams at a rate of 5/second; a high-density return imaged from multiple aspects that results in a 3D image of the desired objects. The Marlin?s software geo-registers each image pixel and constructs a 3D model using advanced image processing techniques. The result is a high-resolution 3D model of the target structure. According to McLeod, ?Introduction of new sensors support even more advanced capabilities leading to autonomous metrology, hy- drocarbon detection tracking and  ngerprinting, non-contact corrosion potential measurement, thermal measurements and 3D underwater scanning lasers.? The Marlin?s sensor suite can generate accurate, hi-reso- lution, 3D, geo-referenced models, showing a clear view of subsea structures, including the use of lasers to produce clear images in murky waters. The 10-ft. submersible is highly ma- neuverable and is able to operate in tight spaces. It can report- edly perform up to four times faster inspections, delivering higher  delity information in hours versus days. Traditional means of inspecting subsea equipment employ visual sen- sors such as video or still cameras mounted on ROVs that are controlled through umbilicals from a dedicated vessel on the surface. This requires signi cant topside support equipment and skilled operators on site to control and maintain the ROV. While the quality of images has improved with the advent of HD sensors, image quality is often degraded by movement of the cameras and the turbidity of the water, potentially reduc- ing the effectiveness of inspections. The  nal data provided to clients is often composed of many hours of recorded video that must be archived and revisited for detailed examination, which in turn increases the time it takes to make informed decisions.While workclass ROVs are a standard in the performance of IRM tasks in deepwater, AUV use is starting to make some inroads as more sophisticated units such as the Marlin AUV become more reliable and ef cient. While ROV use still domi- nates, the inherent cost structure, which includes a large DPII vessel, volumes of deck space and experienced ROV techni- cians and pilots, are cumulatively helping to open the door for AUV systems for opportunities. www.seadiscovery.com Marine Technology Reporter 31MTR #1 (18-33).indd 31MTR #1 (18-33).indd 311/23/2014 10:21:38 AM1/23/2014 10:21:38 AM