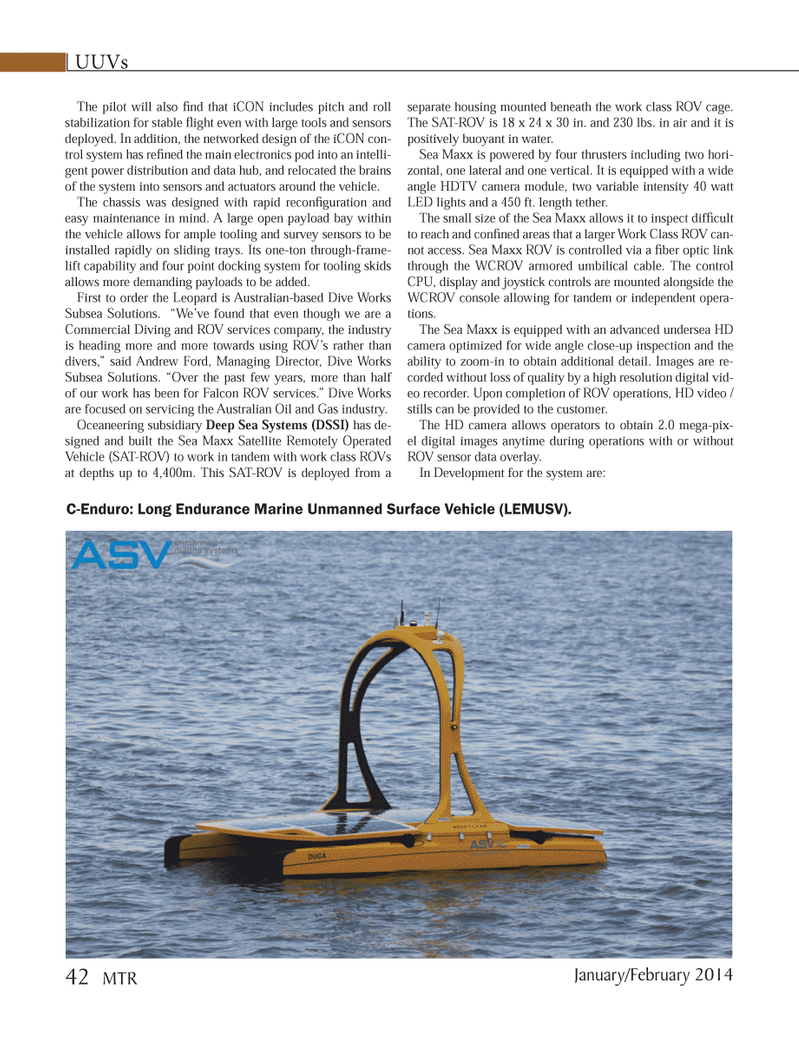 The pilot will also Þ nd that iCON includes pitch and roll stabilization for stable ß ight even with large tools and sensors deployed. In addition, the networked design of the iCON con- trol system has reÞ ned the main electronics pod into an intelli- gent power distribution and data hub, and relocated the brains of the system into sensors and actuators around the vehicle. The chassis was designed with rapid reconÞ guration and easy maintenance in mind. A large open payload bay within the vehicle allows for ample tooling and survey sensors to be installed rapidly on sliding trays. Its one-ton through-frame-lift capability and four point docking system for tooling skids allows more demanding payloads to be added. First to order the Leopard is Australian-based Dive Works Subsea Solutions. ÒWeÕve found that even though we are a Commercial Diving and ROV services company, the industry is heading more and more towards using ROVÕs rather than divers,Ó said Andrew Ford, Managing Director, Dive Works Subsea Solutions. ÒOver the past few years, more than half of our work has been for Falcon ROV services.Ó Dive Works are focused on servicing the Australian Oil and Gas industry. Oceaneering subsidiary Deep Sea Systems (DSSI) has de-signed and built the Sea Maxx Satellite Remotely Operated Vehicle (SAT-ROV) to work in tandem with work class ROVs at depths up to 4,400m. This SAT-ROV is deployed from a separate housing mounted beneath the work class ROV cage. The SAT-ROV is 18 x 24 x 30 in. and 230 lbs. in air and it is positively buoyant in water. Sea Maxx is powered by four thrusters including two hori- zontal, one lateral and one vertical. It is equipped with a wide angle HDTV camera module, two variable intensity 40 watt LED lights and a 450 ft. length tether. The small size of the Sea Maxx allows it to inspect difÞ cult to reach and conÞ ned areas that a larger Work Class ROV can- not access. Sea Maxx ROV is controlled via a Þ ber optic link through the WCROV armored umbilical cable. The control CPU, display and joystick controls are mounted alongside the WCROV console allowing for tandem or independent opera- tions.The Sea Maxx is equipped with an advanced undersea HD camera optimized for wide angle close-up inspection and the ability to zoom-in to obtain additional detail. Images are re-corded without loss of quality by a high resolution digital vid-eo recorder. Upon completion of ROV operations, HD video / stills can be provided to the customer. The HD camera allows operators to obtain 2.0 mega-pix- el digital images anytime during operations with or without ROV sensor data overlay. In Development for the system are: UUVsC-Enduro: Long Endurance Marine Unmanned Surface Vehicle (LEMUSV). January/February 2014 42 MTRMTR #1 (34-49).indd 42MTR #1 (34-49).indd 421/23/2014 10:53:56 AM1/23/2014 10:53:56 AM