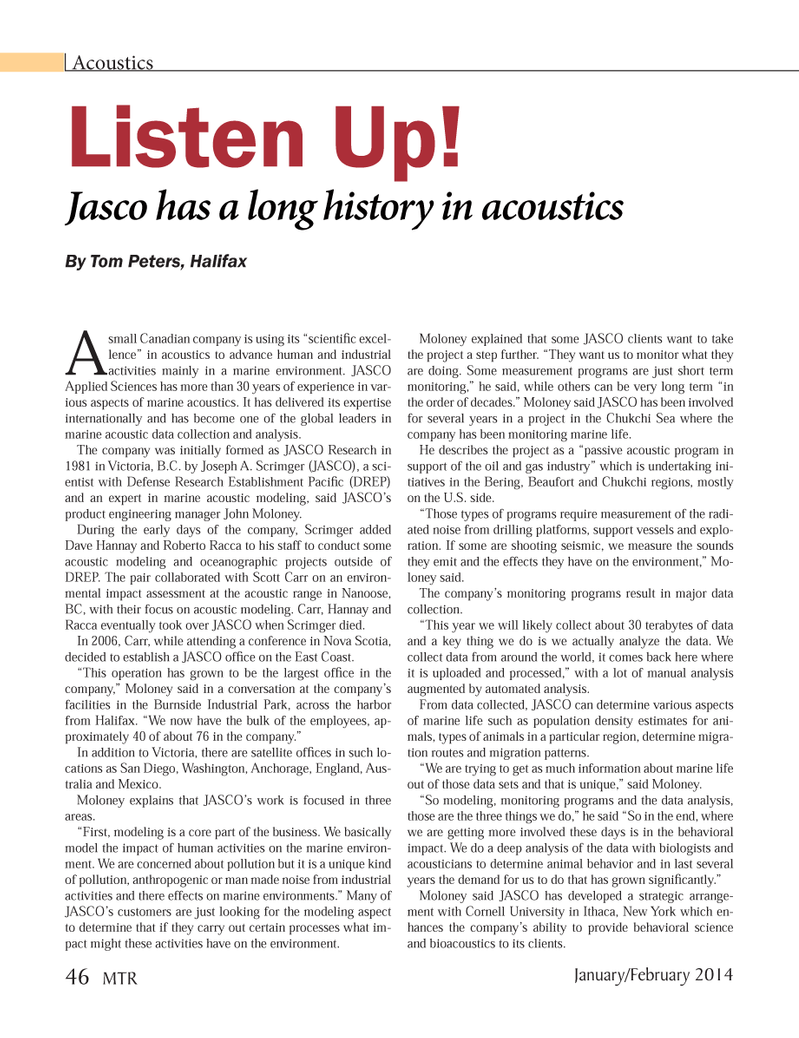 A small Canadian company is using its ?scienti c excel- lence? in acoustics to advance human and industrial activities mainly in a marine environment. JASCO Applied Sciences has more than 30 years of experience in var- ious aspects of marine acoustics. It has delivered its expertise internationally and has become one of the global leaders in marine acoustic data collection and analysis. The company was initially formed as JASCO Research in 1981 in Victoria, B.C. by Joseph A. Scrimger (JASCO), a sci- entist with Defense Research Establishment Paci c (DREP) and an expert in marine acoustic modeling, said JASCO?s product engineering manager John Moloney. During the early days of the company, Scrimger added Dave Hannay and Roberto Racca to his staff to conduct some acoustic modeling and oceanographic projects outside of DREP. The pair collaborated with Scott Carr on an environ- mental impact assessment at the acoustic range in Nanoose, BC, with their focus on acoustic modeling. Carr, Hannay and Racca eventually took over JASCO when Scrimger died. In 2006, Carr, while attending a conference in Nova Scotia, decided to establish a JASCO of ce on the East Coast. ?This operation has grown to be the largest of ce in the company,? Moloney said in a conversation at the company?s facilities in the Burnside Industrial Park, across the harbor from Halifax. ?We now have the bulk of the employees, ap- proximately 40 of about 76 in the company.? In addition to Victoria, there are satellite of ces in such lo- cations as San Diego, Washington, Anchorage, England, Aus- tralia and Mexico. Moloney explains that JASCO?s work is focused in three areas.?First, modeling is a core part of the business. We basically model the impact of human activities on the marine environ- ment. We are concerned about pollution but it is a unique kind of pollution, anthropogenic or man made noise from industrial activities and there effects on marine environments.? Many of JASCO?s customers are just looking for the modeling aspect to determine that if they carry out certain processes what im- pact might these activities have on the environment. Moloney explained that some JASCO clients want to take the project a step further. ?They want us to monitor what they are doing. Some measurement programs are just short term monitoring,? he said, while others can be very long term ?in the order of decades.? Moloney said JASCO has been involved for several years in a project in the Chukchi Sea where the company has been monitoring marine life. He describes the project as a ?passive acoustic program in support of the oil and gas industry? which is undertaking ini-tiatives in the Bering, Beaufort and Chukchi regions, mostly on the U.S. side.?Those types of programs require measurement of the radi-ated noise from drilling platforms, support vessels and explo- ration. If some are shooting seismic, we measure the sounds they emit and the effects they have on the environment,? Mo- loney said. The company?s monitoring programs result in major data collection. ?This year we will likely collect about 30 terabytes of data and a key thing we do is we actually analyze the data. We collect data from around the world, it comes back here where it is uploaded and processed,? with a lot of manual analysis augmented by automated analysis.From data collected, JASCO can determine various aspects of marine life such as population density estimates for ani-mals, types of animals in a particular region, determine migra- tion routes and migration patterns.?We are trying to get as much information about marine life out of those data sets and that is unique,? said Moloney. ?So modeling, monitoring programs and the data analysis, those are the three things we do,? he said ?So in the end, where we are getting more involved these days is in the behavioral impact. We do a deep analysis of the data with biologists and acousticians to determine animal behavior and in last several years the demand for us to do that has grown signi cantly.? Moloney said JASCO has developed a strategic arrange- ment with Cornell University in Ithaca, New York which en- hances the company?s ability to provide behavioral science and bioacoustics to its clients.Acoustics Listen Up! Jasco has a long history in acoustics By Tom Peters, Halifax January/February 2014 46 MTRMTR #1 (34-49).indd 46MTR #1 (34-49).indd 461/23/2014 10:55:52 AM1/23/2014 10:55:52 AM