Read this page in Pdf, Flash or Html5 edition of May 2014 Marine Technology Magazine 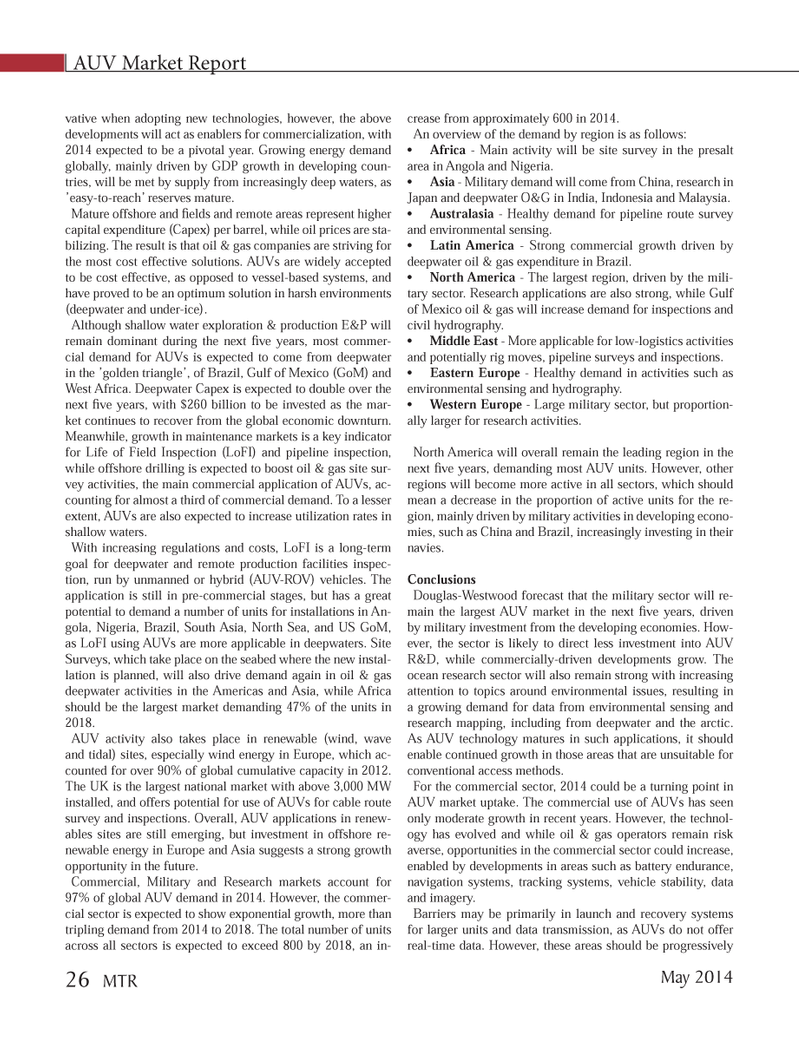 AUV Market Report vative when adopting new technologies, however, the above developments will act as enablers for commercialization, with 2014 expected to be a pivotal year. Growing energy demand globally, mainly driven by GDP growth in developing coun- tries, will be met by supply from increasingly deep waters, as ?easy-to-reach? reserves mature. Mature offshore and  elds and remote areas represent higher capital expenditure (Capex) per barrel, while oil prices are sta- bilizing. The result is that oil & gas companies are striving for the most cost effective solutions. AUVs are widely accepted to be cost effective, as opposed to vessel-based systems, and have proved to be an optimum solution in harsh environments (deepwater and under-ice). Although shallow water exploration & production E&P will remain dominant during the next  ve years, most commer- cial demand for AUVs is expected to come from deepwater in the ?golden triangle?, of Brazil, Gulf of Mexico (GoM) and West Africa. Deepwater Capex is expected to double over the next  ve years, with $260 billion to be invested as the mar- ket continues to recover from the global economic downturn. Meanwhile, growth in maintenance markets is a key indicator for Life of Field Inspection (LoFI) and pipeline inspection, while offshore drilling is expected to boost oil & gas site sur- vey activities, the main commercial application of AUVs, ac- counting for almost a third of commercial demand. To a lesser extent, AUVs are also expected to increase utilization rates in shallow waters. With increasing regulations and costs, LoFI is a long-term goal for deepwater and remote production facilities inspec- tion, run by unmanned or hybrid (AUV-ROV) vehicles. The application is still in pre-commercial stages, but has a great potential to demand a number of units for installations in An- gola, Nigeria, Brazil, South Asia, North Sea, and US GoM, as LoFI using AUVs are more applicable in deepwaters. Site Surveys, which take place on the seabed where the new instal- lation is planned, will also drive demand again in oil & gas deepwater activities in the Americas and Asia, while Africa should be the largest market demanding 47% of the units in 2018. AUV activity also takes place in renewable (wind, wave and tidal) sites, especially wind energy in Europe, which ac- counted for over 90% of global cumulative capacity in 2012. The UK is the largest national market with above 3,000 MW installed, and offers potential for use of AUVs for cable route survey and inspections. Overall, AUV applications in renew- ables sites are still emerging, but investment in offshore re- newable energy in Europe and Asia suggests a strong growth opportunity in the future. Commercial, Military and Research markets account for 97% of global AUV demand in 2014. However, the commer- cial sector is expected to show exponential growth, more than tripling demand from 2014 to 2018. The total number of units across all sectors is expected to exceed 800 by 2018, an in- crease from approximately 600 in 2014.An overview of the demand by region is as follows:  Africa - Main activity will be site survey in the presalt area in Angola and Nigeria.  Asia - Military demand will come from China, research in Japan and deepwater O&G in India, Indonesia and Malaysia.  Australasia - Healthy demand for pipeline route survey and environmental sensing.  Latin America - Strong commercial growth driven by deepwater oil & gas expenditure in Brazil.  North America - The largest region, driven by the mili- tary sector. Research applications are also strong, while Gulf of Mexico oil & gas will increase demand for inspections and civil hydrography.  Middle East - More applicable for low-logistics activities and potentially rig moves, pipeline surveys and inspections.  Eastern Europe - Healthy demand in activities such as environmental sensing and hydrography.  Western Europe - Large military sector, but proportion- ally larger for research activities. North America will overall remain the leading region in the next  ve years, demanding most AUV units. However, other regions will become more active in all sectors, which should mean a decrease in the proportion of active units for the re- gion, mainly driven by military activities in developing econo- mies, such as China and Brazil, increasingly investing in their navies. ConclusionsDouglas-Westwood forecast that the military sector will re- main the largest AUV market in the next  ve years, driven by military investment from the developing economies. How- ever, the sector is likely to direct less investment into AUV R&D, while commercially-driven developments grow. The ocean research sector will also remain strong with increasing attention to topics around environmental issues, resulting in a growing demand for data from environmental sensing and research mapping, including from deepwater and the arctic. As AUV technology matures in such applications, it should enable continued growth in those areas that are unsuitable for conventional access methods. For the commercial sector, 2014 could be a turning point in AUV market uptake. The commercial use of AUVs has seen only moderate growth in recent years. However, the technol- ogy has evolved and while oil & gas operators remain risk averse, opportunities in the commercial sector could increase, enabled by developments in areas such as battery endurance, navigation systems, tracking systems, vehicle stability, data and imagery. Barriers may be primarily in launch and recovery systems for larger units and data transmission, as AUVs do not offer real-time data. However, these areas should be progressively 26 MTRMay 2014MTR #4 (18-33).indd 26MTR #4 (18-33).indd 265/12/2014 10:50:10 AM5/12/2014 10:50:10 AM