The Naval Surface Warfare Center, Carderock Division in West Bethesda, Md., is one of the world’s leading centers for surface and underwater hydrodynamic expertise, research and design, to include world-class facilities for experimentation, testing, evaluation and validation.

“We build scale models of ship designs and can test these hull forms in our facilities to measure hydrodynamic load on the structure or evaluate seakeeping abilities,” said Mike Brown, head of Carderock’s Naval Architecture and Engineering Department. “This helps us to characterize and predict the performance of our platforms.”

Carderock’s campus along the Potomac River houses the tow tank to test surface ship, submarine and unmanned vehicle models, as well as the 240 x 360 foot wave making maneuvering and seakeeping (MASK) basin, which can generate any kind of wave and wave pattern that occurs anywhere in the world, as well as waves that don’t occur naturally, in a controllable and repeatable environment.

The center’s rotating arm basin pivots around a center for propulsor evaluations in turns and captive model stability and control experiments. The center also has access to a reservoir in Maryland where scaled models of both ships and submarines are tested.

But some of Carderock’s most impressive capabilities reside far away, at facilities from the Alaska to the Bahamas, and from Tennessee to Idaho.

Carderock’s Acoustic Research Detachment (ARD) is located far from the ocean in Idaho. Thanks to deep and quiet Lake Pend Oreille, the Navy has a superb controlled environment for acoustic testing using large scale model submarines. The ARD maintains self-propelled large scale vehicles (LSV), such as the 90-foot long Kokanee (LSV-1), a scale model of a Seawolf-class submarine, and the 110-ft. Cutthroat (LSV-2) model of a Virginia-class boat, for the evaluation of design changes and new technologies to ensure the boats are as quiet as possible.

The William B. Morgan Large Cavitation Channel (LCC) is located on the banks of the Mississippi River in Memphis, Tenn. The LCC is like a wind tunnel, but filled with a 1.5 million gallons of fresh water. Just as a wind tunnel helps understand aerodynamic properties of various shapes, the LCC can test shapes like scale models of surface ships, submarines or even full-size torpedoes and underwater vehicles, collecting enormous amounts of data to measure extremely small perturbations in hydrodynamic performance.

“In the LCC, the model is held in place in the test section and we control the flow of the water around it,” said Dave Foster, LCC Operations Manager. The flow is created by a 14,000 hp electric motor. “By varying the RPM of the large motor driving the 18 foot diameter LCC propeller, the velocity of the flow of the water through the test section can be controlled precisely to match the test parameters,” said Foster.

The test objects are suspended in a 10 x 10 by 43 ft. long chamber. The chamber can be drained and opened to gain access to the test object, which can be changed to test difference shapes and configurations. “We can create different control surfaces through 3D printing,” said Brown.

Right now the LCC is being used to characterize the performance of the propulsor for the Columbia-class ballistic missile submarine, the replacement for the Ohio-class submarines. “We built a scale model of the entire submarine and propulsor to measure everything from unsteady forces to powering to cavitation. It’s the most sophisticated model Carderock has ever built,” Brown said. “We can vary the test conditions and measure very small perturbations in performance.”

And unlike the ocean, a big advantage of the LCC is that the team can change the LCC flow and pressure and vary model parameters such as control surface and model angles. “We can maintain test conditions for hours under precise conditions allowing the collection of large amounts of data in the course of a day,” said Foster.

“We recently conducted testing of full scale minehunting towed system. The LCC was the only facility where we could obtain actual data without taking it to the ocean” Brown said.

“And unlike the ocean, the LCC test section has windows allowing the test object to be observed and recorded during the runs,” Foster added.

The tests can be run in many iterations to validate and improve the computer modeling capability at Carderock.

A significant amount of testing is conducted before coming to the LCC. “We can do our computer modeling of the computational fluid dynamics, then build a physical model to test in our tow tank. Then we can test that model, or a larger one, in the LCC. Eventually, our signatures department can conduct acoustic testing at the ARD in Idaho.

Using data obtained from testing models in the Carderock facilities, the computer models are improved to provide better predictions and then these computer models can used to run millions of variations to fully characterize the properties and behavior of different designs.

“We work together through CRADAs, which are mutual agreements that benefit all parties,” Brown said.


(As published in the May 2018 edition of Marine Technology Reporter) 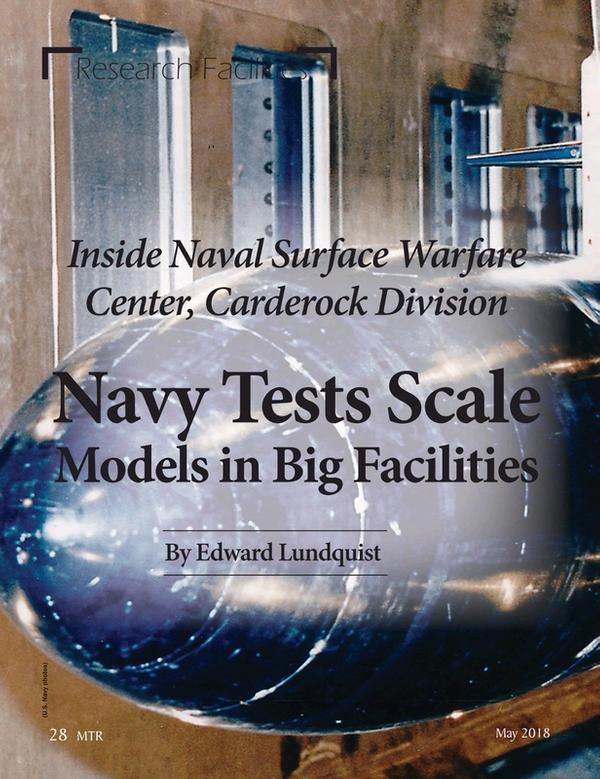