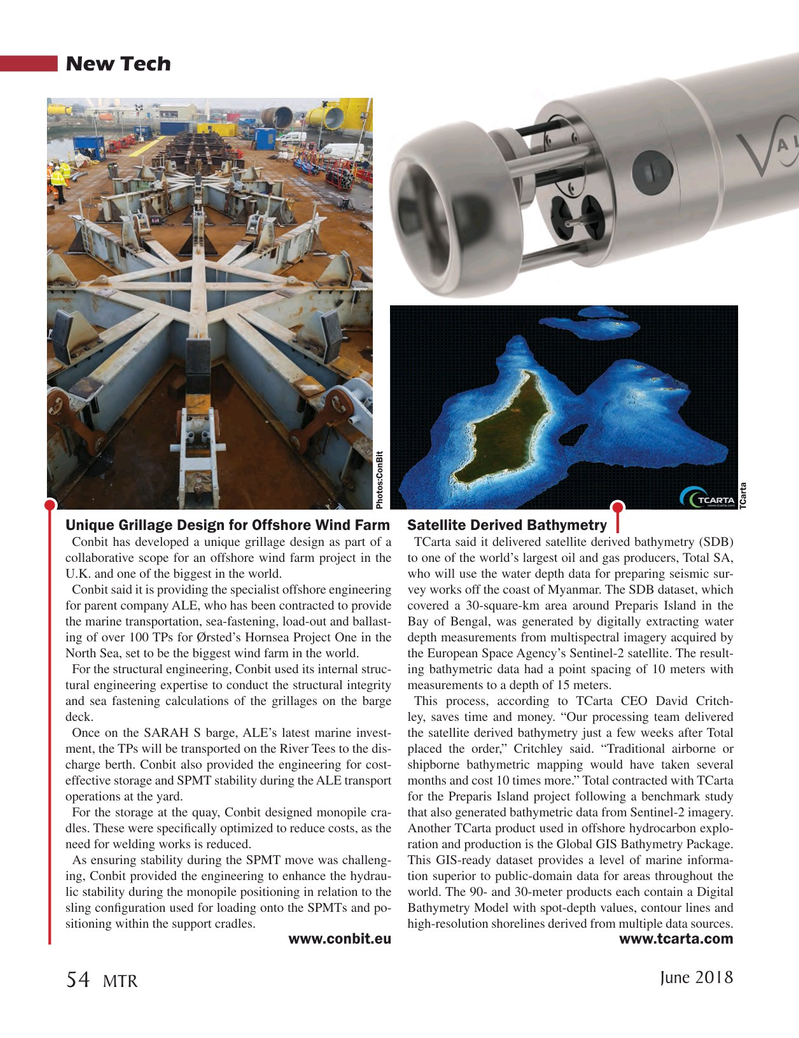 Conbit has developed a unique grillage design as part of a TCarta said it delivered satellite derived bathymetry (SDB) collaborative scope for an offshore wind farm project in the to one of the world’s largest oil and gas producers, Total SA,

U.K. and one of the biggest in the world. who will use the water depth data for preparing seismic sur-

Conbit said it is providing the specialist offshore engineering vey works off the coast of Myanmar. The SDB dataset, which for parent company ALE, who has been contracted to provide covered a 30-square-km area around Preparis Island in the the marine transportation, sea-fastening, load-out and ballast- Bay of Bengal, was generated by digitally extracting water ing of over 100 TPs for Ørsted’s Hornsea Project One in the depth measurements from multispectral imagery acquired by

North Sea, set to be the biggest wind farm in the world. the European Space Agency’s Sentinel-2 satellite. The result-

and sea fastening calculations of the grillages on the barge This process, according to TCarta CEO David Critch- deck. ley, saves time and money. “Our processing team delivered

Once on the SARAH S barge, ALE’s latest marine invest- the satellite derived bathymetry just a few weeks after Total ment, the TPs will be transported on the River Tees to the dis- placed the order,” Critchley said. “Traditional airborne or charge berth. Conbit also provided the engineering for cost- shipborne bathymetric mapping would have taken several effective storage and SPMT stability during the ALE transport months and cost 10 times more.” Total contracted with TCarta operations at the yard. for the Preparis Island project following a benchmark study

For the storage at the quay, Conbit designed monopile cra- that also generated bathymetric data from Sentinel-2 imagery. dles. These were speci