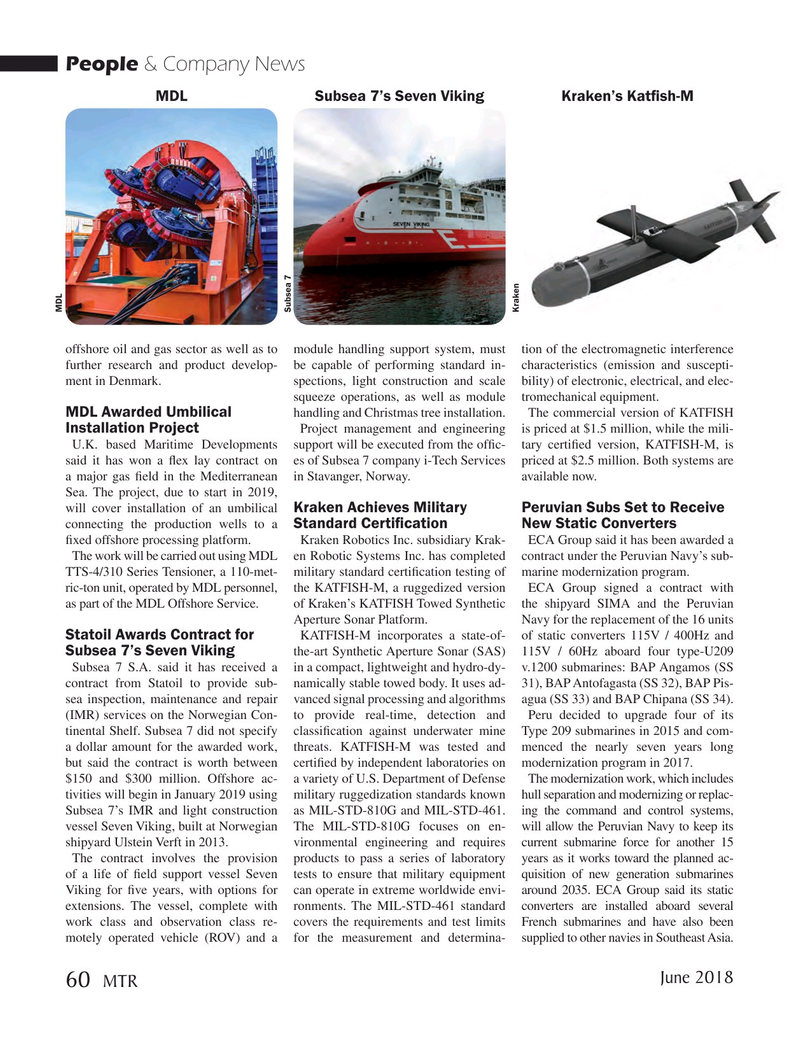 Kraken offshore oil and gas sector as well as to module handling support system, must tion of the electromagnetic interference further research and product develop- be capable of performing standard in- characteristics (emission and suscepti- ment in Denmark. spections, light construction and scale bility) of electronic, electrical, and elec- squeeze operations, as well as module tromechanical equipment.

Installation Project Project management and engineering is priced at $1.5 million, while the mili-

U.K. based Maritime Developments support will be executed from the of? c- tary certi? ed version, KATFISH-M, is said it has won a ? ex lay contract on es of Subsea 7 company i-Tech Services priced at $2.5 million. Both systems are a major gas ? eld in the Mediterranean in Stavanger, Norway. available now.

Sea. The project, due to start in 2019, will cover installation of an umbilical Kraken Achieves Military Peruvian Subs Set to Receive connecting the production wells to a Standard Certi? cation New Static Converters ? xed offshore processing platform. Kraken Robotics Inc. subsidiary Krak- ECA Group said it has been awarded a

The work will be carried out using MDL en Robotic Systems Inc. has completed contract under the Peruvian Navy’s sub-

Aperture Sonar Platform. Navy for the replacement of the 16 units

(IMR) services on the Norwegian Con- to provide real-time, detection and Peru decided to upgrade four of its tinental Shelf. Subsea 7 did not specify classi? cation against underwater mine Type 209 submarines in 2015 and com- a dollar amount for the awarded work, threats. KATFISH-M was tested and menced the nearly seven years long but said the contract is worth between certi? ed by independent laboratories on modernization program in 2017.

$150 and $300 million. Offshore ac- a variety of U.S. Department of Defense The modernization work, which includes tivities will begin in January 2019 using military ruggedization standards known hull separation and modernizing or replac-

Subsea 7’s IMR and light construction as MIL-STD-810G and MIL-STD-461. ing the command and control systems, vessel Seven Viking, built at Norwegian The MIL-STD-810G focuses on en- will allow the Peruvian Navy to keep its shipyard Ulstein Verft in 2013. vironmental engineering and requires current submarine force for another 15

The contract involves the provision products to pass a series of laboratory years as it works toward the planned ac- of a life of ? eld support vessel Seven tests to ensure that military equipment quisition of new generation submarines

Viking for ? ve years, with options for can operate in extreme worldwide envi- around 2035. ECA Group said its static extensions. The vessel, complete with ronments. The MIL-STD-461 standard converters are installed aboard several work class and observation class re- covers the requirements and test limits French submarines and have also been motely operated vehicle (ROV) and a for the measurement and determina- supplied to other navies in Southeast Asia.