Subsea’s Future is Blowin’ in the Wind

Offshore wind is hot, with the potential to be a significant area of growth for the global maritime, subsea and energy markets for years to come. Eric Haun does a deep dive on eight companies leading the way.

GE Renewable Energy
As offshore wind projects across the globe look to incorporate the latest innovations in wind turbine technology to maximize efficiency and drive down costs, many manufacturers are producing larger turbines on advanced foundation designs for even greater water depths. These larger turbines, which are able to capture more energy and are more efficient, allow for fewer installations and lower maintenance costs.

In March 2018, GE Renewable Energy announced it will invest more than $400 million over the next three to five years to develop and deploy the Haliade-X 12 MW, set to take over as the world’s largest and most powerful offshore wind turbine. The installation will feature a 12 MW capacity, 220-meter rotor, a 107-meter blade. Towering 260 meters over the sea, Haliade-X will produce 45 percent more energy than any other offshore wind turbine presently available and will generate up to 67 GWh annually, GE said.

Higher power producing turbines offer efficiencies across an entire project by reducing risk and costs for installation (fewer turbines installed), operation, maintenance and repair for developers, which makes offshore wind projects more profitable and ultimately lowers cost of electricity for consumers. The Haliade-X is designed to offer greater power generation efficiency, with a 63 percent gross capacity factor five to seven points above the current industry benchmark, according to GE. Therefore, it will produce more energy per MW installed.

Ideol Offshore, STX Europe Offshore Energy
In several locations across the globe, commercial wind farms are being designed for waters that simply cannot support the fixed structures typically used. For these projects a new generation of floating wind turbines is in development. Offshore substations that collect and export power generated by turbines through underwater cables will also need to be specially engineered to float. Ideol and STX Europe Offshore Energy say they are developing a novel floating substation that will be compatible with both traditional bottom-fixed and new floating offshore wind farms. Ideol develops floating foundation technologies for offshore wind farms, and STX has supplied substations to the bottom-fixed offshore wind industry. Together the partners seek to create, build and install a universal and modular floating substation based on Ideol’s patented shallow-draft damping pool concept for floating turbines.The concept involves a ring-shaped floating foundation structure with a central opening that leverages hydrodynamic properties to stabilize the foundation and turbine, or in this case substation. The sloshing of the water contained within the opening effectively counteracts the movement of the floater cause by wave swell. Ideol and STX say the floating substation is being designed to maximize both standardization for cost reduction and modularization for greater project flexibility. The developers aim to have a market ready solution in time for France’s upcoming floating commercial tenders.

Principle Power
The technologies being developed to enable floating offshore wind farms have generated a lot of buzz, and for good reason. High-tech floating structures unlock the potential for clean wind energy in waters – especially deep waters – such as off the U.S. West Coast and in parts of Asia where traditional fixed-foundations cannot be supported.

Among the leaders in this space is California-based Principle Power and its patented triangular shaped floating wind turbine foundation WindFloat. The semi-submersible three-column offshore platform features water entrapment plates that, through damping effects, reduce motion due to waves. Work to build the floating base and install a turbine atop one of its columns is completed entirely onshore before the full assembly is towed to its final location offshore, significantly reducing installation costs. The WindFloat is also “turbine agnostic”, meaning any conventional offshore wind turbine can be installed atop one of its columns.

Working with a consortium of partners, Principle Power deployed a full-scale 2MW WindFloat protype off the coast of Portugal in 2011, and in the time since has taken the technology through its paces to prove its readiness for commercialization. Over a five-year operation period, more than 17 GWh of electricity was produced and delivered to the local grid by subsea cable before the prototype was decommissioned in 2016.

Now, leveraging the operational data and experience gained over the course of the trial period, Principle Power has multiple follow-on projects under development for offshore wind energy projects off the coast of California, Portugal, France and elsewhere. The company is even working to design a floating foundation capable of hosting a next generation 10+MW rated turbine being developed as part of a project involving German turbine manufacturer Senvion.

SkySpecs, Orsted
In less than 15 minutes, a fully automated aerial drone was able to conduct a top to bottom blade inspection of the world’s largest offshore wind turbine.

The innovative inspection was recently performed on the 80m turbine blades of an 8MW MHI Vestas V164 turbine at Burbo Bank Extension, 7km off the coast of Liverpool Bay in the Irish Sea, through a partnership between U.S. based SkySpecs and offshore wind farm developer and operator Ørsted.

Denmark based Ørsted (formerly DONG Energy) has roots in the oil and gas industry that go back to the early 1970s. Today, the company is completely focused on clean renewable energy and is the world’s largest offshore wind farm company, with projects in operation or under development in Denmark, the U.K., Germany, the Netherlands, the U.S. and Taiwan. Needless to say, the company has a large number of wind turbines in operation, all of which will require inspection throughout the life of the equipment.

SkySpecs cofounder and chief technology officer Tom Brady said information gathered through his company’s automated drone inspection service helps owners to form their predictive maintenance strategies with “a mountain of blade data” and analytics tools that help to better understand the health of their equipment.

Equinor, Masdor
Partners Equinor (formerly Statoil) and Masdor have installed a battery storage system they call Batwind, which stores energy generated from the world’s first commercial floating wind farm. Electricity produced 25 kilometers offshore at the Hywind Scotland wind farm is transported via cables to an onshore substation in Peterhead, Scotland to be stored in the Batwind 1 MW lithium-ion batteries and connected to the grid.

Energy storage technologies like batteries and others are expected to grow increasingly important for grid stability in the years to come, especially as the installed costs of battery storage systems continues to fall. Sebastian Bringsvaerd, development manager for Hywind and Batwind, explained that variability of renewable energy can be managed by the grid to a certain degree, but new, smart solutions for energy storage are needed to provide firm power.

Equinor compares Batwind to an “energy warehouse” that works to mitigate intermittency and optimize output. Its purpose, Equionr says, is to “teach” the battery when to hold back and store electricity, and when to send power to the grid, thus increasing value. In order to make the system as smart as possible, Equinor and Masdar are developing algorithms based on multiple data sources, including weather forecasts, market prices, maintenance schedules, consumption patterns and grid services. Digitalization is a key driver, Bringsvaerd said. Batwind’s power management system becomes smarter as its fed more data, he explained, adding that the value in storage is not necessarily in the amount of energy stored, but how its optimized and better controlled. 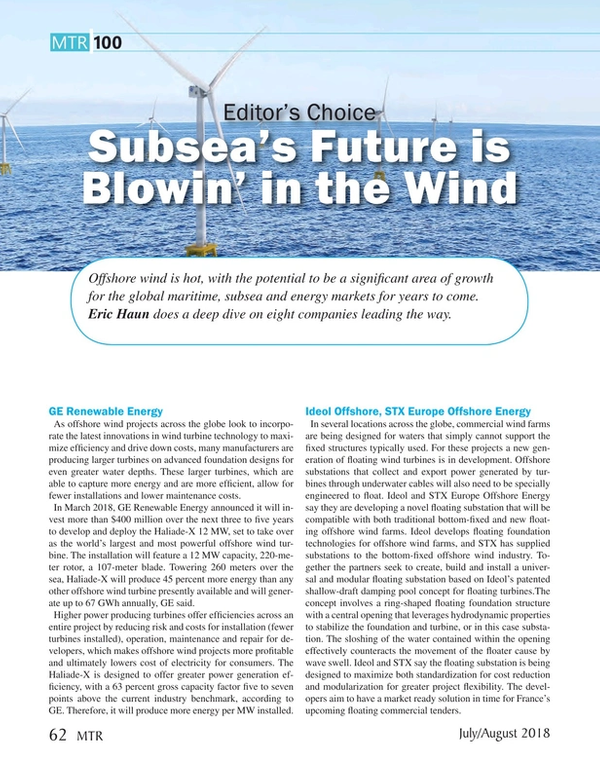 Read Subsea’s Future is Blowin’ in the Wind in Pdf, Flash or Html5 edition of July 2018 Marine Technology