The Hunt for the Notorious U-Boat UB-29

You get an idea before you even walk in his door that Tomas Termote’s life is bound up with the sea, or at any rate what lies beneath it. Outside his house in Ostend, on the Belgian coast, stands the biggest anchor you’ve ever seen—over 16 feet high, weighing five tons. It was hand-forged for an old British man-of-war, and a trawler hauled it up from the seabed of the English Channel, a stone’s throw from here.

Out in the backyard, there’s a creepy-looking mine from the First World War, about a foot in diameter and prickly all over with detonators. It too came from nearby waters. The Germans occupied the entire Belgian coast during World War I. Their U-boats were based farther inland in Bruges, just outside the range of British naval guns, and passed through canals that fed into the channel at Ostend and the nearby town of Zeebrugge. The dunes outside Termote’s house are still lined with concrete bunkers built by the Germans to defend its U-boat bases from British attack. It was mines like the one in Termote’s backyard that sent more of Germany’s WWI U-boats to the bottom of the channel than anything else.

Termote started diving the icy English Channel at age 14 with his father, Dirk, a retired hotelier. Along the way, he picked up a degree in marine archaeology—a subject that barely existed when he started studying it—and has been studying wrecks around the world ever since. But the vast U-boat cemetery that starts just outside his front door is what he most loves to explore. To date, he has found the remains of 28 U-boats down there, 11 in Belgian waters. His book about U-boats, War Beneath the Waves, was published last year. One newspaper headline called him “the Flemish Indiana Jones.”

Termote is a compact, broad-chested man, soft-spoken and amiable. For most of the year, he makes his living diving commercially around the Belgian ports. Summer is for combing the local waters for wrecks, which are getting tougher to find all the time. The seafloor has been well mapped and picked over by now. Yet only last summer Termote stumbled across his most important discovery yet.

In the spring of 2017, Termote was checking Belgian hydrographic department documents online to see if any previously charted wrecks had shifted on the seabed. He took a passing look at one of these flagged wrecks lying some 80 feet deep about 12 miles straight off Ostend. “She’s been on the chart since 1947,” says Termote. “In the 1980s, she was identified as an upturned landing craft, like the ones in Saving Private Ryan. So it didn’t sound very interesting.” Modern multi-beam echo-sounders—the sonar devices now used for hydrographic surveys—are far more sensitive than earlier technologies. “Today you can almost see the links in an anchor chain. This was obviously not a landing craft. It wasn’t shaped like a biscuit tin, but like a cigar, with two pointy ends and a tower in the middle. The surveys also give you the length, and this was 26 or 27 meters. I was like, Bloody hell! This has to be a submarine!”

The original faulty identification had almost certainly thrown other wreck hunters off the scent. It helped, too, that the sub lay in the middle of a shipping lane, further discouraging the curious. “Every 15 or 20 minutes, you get 200-meter tankers passing over it—it would be like diving on a freeway.”

Since 2013, the governor of West Flanders, which includes Belgium’s short seacoast, has been Carl Decaluwé. In addition to his other duties, Decaluwé is Belgium’s Receiver of Wrecks, which means he has authority over anything found in Belgian territorial waters. He’s another of Termote’s old friends, not to mention a maritime history buff. So when Termote went down for the first time last June, maritime police were standing by and coastal radar had been alerted; a 1,000-foot exclusion zone kept commercial shipping from the dive site. “In the first half-minute, I knew it was a German UB II-class submarine,” remembers Termote. “After 30 U-boats, you just feel it. I can’t describe the elation I felt when I came up.”

Termote made six dives that summer. The submarine was indeed a UB Class II U-boat. Both periscopes had been bent forward. Swimming around the bow, Termote saw that the top starboard torpedo tube had been twisted and ripped in what must have been a massive explosion—UB II-class subs had two tubes on each side, one on top of the other.

Miraculously, given that it had been so violently sunk, the sub had escaped more extensive damage and was largely intact. “Finding a U-boat in such a condition is unique,” says Termote. “Most are heavily damaged—blown in two, or heavily salvaged. You won’t find another like this.” Still, the identification number painted on the conning tower was missing, corroded over time. At a press conference last September, when Belgian authorities announced the discovery, the sub’s identity remained a mystery.

In the absence of tower markings, the surest way to identify a U-boat is by its bronze propeller, often stamped by date and, if you’re lucky, serial number. Termote went down again and examined the U-boat’s stern. The port-side propeller had been sheared off. Termote suspects it was lost when Belgian authorities had “wire-dragged” the sea down to 25 meters to make sure nothing sticking up any higher could endanger local shipping. The starboard propeller was still there, but was made of iron and unmarked—the first time Termote had found a U-boat with an iron propeller. “By the end of 1916, U-boat crews knew they were on a suicide mission because the British had gotten so good at detecting and destroying U-boats,” says Termote. “Why bother putting a nice propeller on her?”

Termote made a final dive before winter last November. To put a name to his U-boat, he hoped to match a number on the periscope with records from the optics supplier, Berlin’s C.P. Goerz. He did find the number—417—but the Goerz archives, he learned, no longer exist. “On the dive, I started cleaning the torpedo tubes; you can find markings there,” says Termote. “Clean, clean, clean—and this ten-centimeter plaque comes free. It says, UB-29. I can’t describe that feeling.”

UB-29 was based in the medieval town of Bruges as part of the Flanders Flotilla, Germany’s English Channel fleet. The sub first took to sea in March 1916. At the helm was Herbert Pustkuchen, who was to become one of Germany’s most deadly U-boat aces. Pustkuchen ranks 31st among 37 commanders who each sank over 100,000 tons of Allied shipping during World War I. For this he won two Iron Crosses and the Royal House Order of Hohenzollern.

Pustkuchen is best known not for the ships he sank, but for one he didn’t. On March 24, 1916, Pustkuchen sighted a cross-channel ferry, the SS Sussex, en route from Folkestone in England to Dieppe in France with 325 passengers aboard. With no prior warning, UB-29 fired a torpedo from 1,400 yards, tearing off the ferry’s bow. Lifeboats were lowered, but several capsized. At least 50 passengers lost their lives. The Sussex managed to stay afloat and was towed, stern-first, to France. There were Americans on board the Sussex, and several were among the wounded. Pustkuchen had kicked a hornet’s nest.

Less than a year before, a German U-boat sank the liner Lusitania in the Irish Sea, and 128 Americans died. President Woodrow Wilson put Germany on notice that “unrestricted submarine warfare”—the shoot-first tactic that U-boat skippers took up after early losses—would bring the United States into the war. Now UB-29 had done it again, and Wilson threatened to break diplomatic relations. Cowed, Germany signed the “Sussex Pledge.” Henceforth, her U-boat captains would surface and search merchant ships for munitions. If armaments were found, the sub crew could sink the ship, after allowing its merchant crew to board lifeboats. Passenger shipping would be spared. These were known in maritime law as “cruiser rules,” reducing the effectiveness of U-boats, now denied their surprise torpedo attacks.

UB-29’s last patrol came less than a year after it entered service, under a new captain, Erich Platsch. (Herbert Pustkuchen went down with his crew in June 1917, when his UC-66 was bombed by a Curtis flying boat near England’s Scilly Isles; the wreck was found in 2009.) It was Platsch’s second time out. On December 13, 1916, UB-29 was spotted by the British destroyer HMS Landrail near the Strait of Dover. The Landrail managed to ram the sub before it could fully submerge. The destroyer dropped several depth charges over the side (the depth-charge launcher had yet to be invented). UB-29 was never seen again. Around midnight, Landrail’s searchlights picked out oil and debris on the surface of the water.

The weather was bad and the night was black. Landrail headed for home. In the absence of conclusive evidence, Landrail was never credited with an official kill, but the crew was awarded prize money anyway. English authorities marked the unseen grave of UB-29 southwest of the Goodwin Sands, six miles off the coastal town of Deal in Kent.

By early 1917, the German high command had concluded that it would be hard-pressed to win the war of attrition on the Western Front. The Allies could shovel men and arms into the mouth of war faster than Germany. Some two weeks after UB-29 went down, German Adm. Henning von Holtzendorff, in so many words, called for an end to the pledge it had provoked, and urged Germany to let U-boats fire at will. Holtzendorff predicted that Allied shipping losses would climb to 600,000 tons a month for the first four months, almost double their rate under cruiser rules. Losses would continue at 400,000 tons a month. England, crippled by falling food stocks, industrial strikes and economic chaos, would sue for peace in five months. At a conference in the German town of Pless on January 9, 1917, the German High Command decided that unrestricted submarine warfare would commence February 1.

Here’s what Termote thinks happened to UB-29. When the Landrail rammed the sub, the impact bent the two periscopes simultaneously, which is why he found them at the same angle. The depth charges wounded it and ruptured its oil tanks. But, he argues, UB-29 crawled away, slowly limping the 60 or so miles back home on compass. Platsch and his 21 crewmen must have felt a wild elation. “They were probably celebrating their escape—‘We’re going to be home in an hour! We made it! Let’s party, drink champagne!’ And then Boom!” Termote suggests that UB-29 hooked a mine with one of the twisted periscopes, dragging it down directly onto its hull.

UB-29’s last moments must have been slow and horrible. “You can see the damage is limited to the bow, so you could imagine that the people from the command center up to the engine room might still have been alive afterwards. It’s not like the U-boats you find blown in half where everybody dies immediately,” says Termote. As the water rose inside the hull, the crewmen may have cut short their inevitable agony by shooting themselves with their long-barreled service Lugers. Or they may have stuffed cotton in their mouths and noses and drowned themselves. Both were known to happen. “Terrible,” says Termote. However they met their end, they lie within UB-29’s steel walls, buried in the sand that has filtered through its cracks for a hundred years. 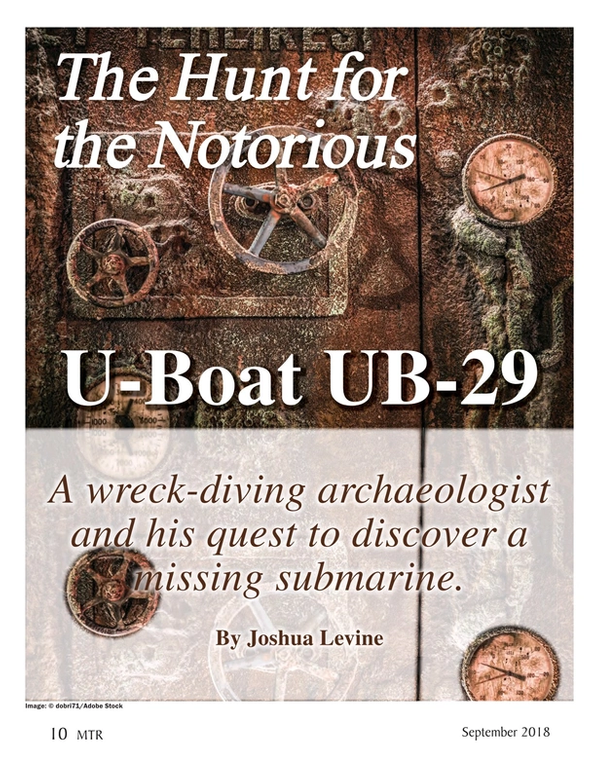 Read The Hunt for the Notorious U-Boat UB-29 in Pdf, Flash or Html5 edition of September 2018 Marine Technology