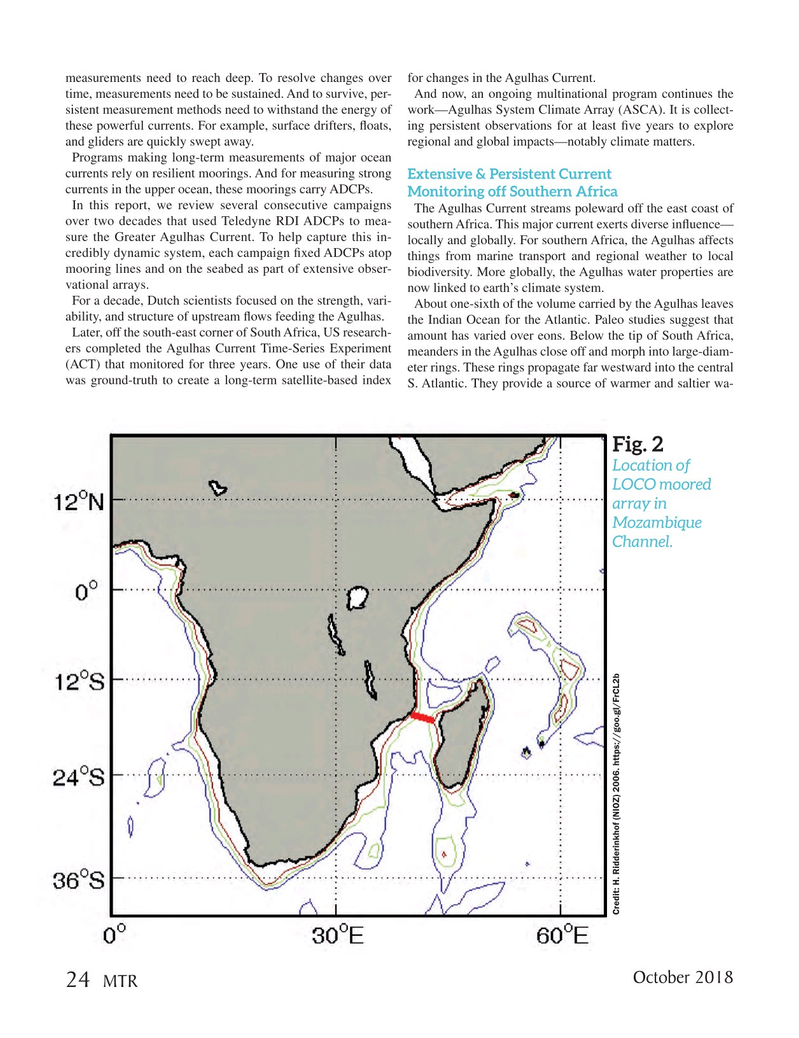 measurements need to reach deep. To resolve changes over for changes in the Agulhas Current.

time, measurements need to be sustained. And to survive, per- And now, an ongoing multinational program continues the sistent measurement methods need to withstand the energy of work—Agulhas System Climate Array (ASCA). It is collect- these powerful currents. For example, surface drifters, ? oats, ing persistent observations for at least ? ve years to explore and gliders are quickly swept away. regional and global impacts—notably climate matters.

In this report, we review several consecutive campaigns

The Agulhas Current streams poleward off the east coast of over two decades that used Teledyne RDI ADCPs to mea- southern Africa. This major current exerts diverse in? uence— sure the Greater Agulhas Current. To help capture this in- locally and globally. For southern Africa, the Agulhas affects credibly dynamic system, each campaign ? xed ADCPs atop things from marine transport and regional weather to local mooring lines and on the seabed as part of extensive obser- biodiversity. More globally, the Agulhas water properties are vational arrays.

For a decade, Dutch scientists focused on the strength, vari-

About one-sixth of the volume carried by the Agulhas leaves ability, and structure of upstream ? ows feeding the Agulhas. the Indian Ocean for the Atlantic. Paleo studies suggest that

Later, off the south-east corner of South Africa, US research- amount has varied over eons. Below the tip of South Africa, ers completed the Agulhas Current Time-Series Experiment meanders in the Agulhas close off and morph into large-diam- (ACT) that monitored for three years. One use of their data eter rings. These rings propagate far westward into the central was ground-truth to create a long-term satellite-based index S. Atlantic. They provide a source of warmer and saltier wa-