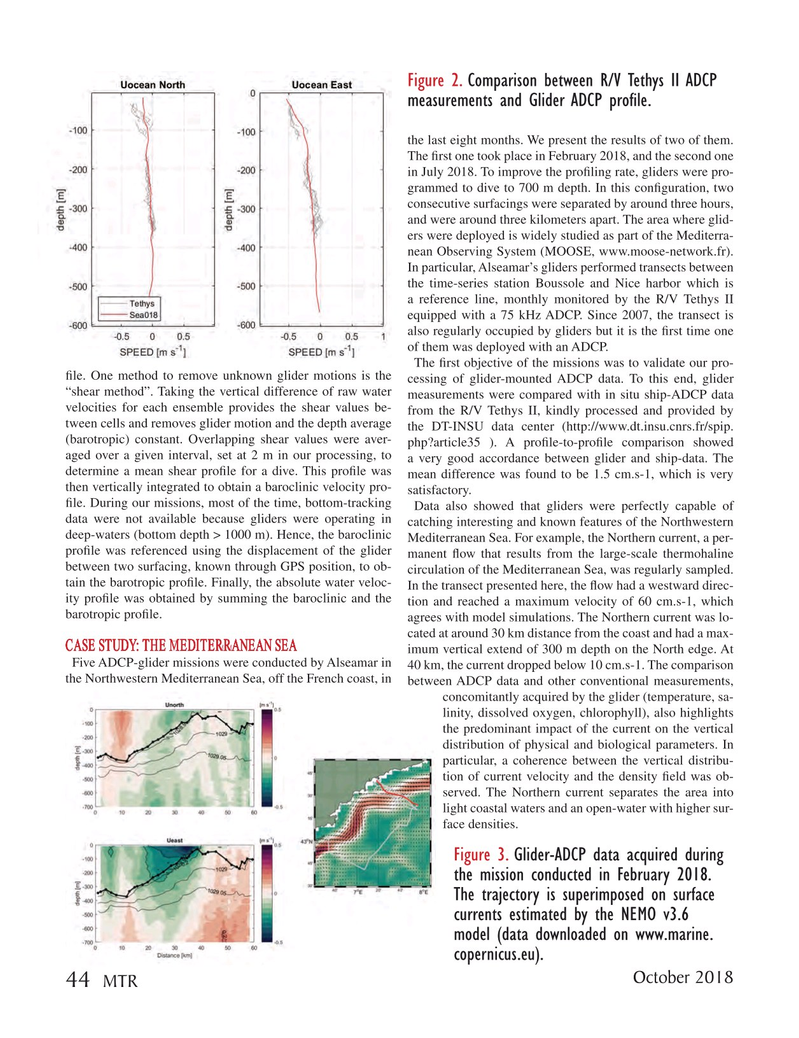 the last eight months. We present the results of two of them.

The ? rst one took place in February 2018, and the second one in July 2018. To improve the pro? ling rate, gliders were pro- grammed to dive to 700 m depth. In this con? guration, two consecutive surfacings were separated by around three hours, and were around three kilometers apart. The area where glid- ers were deployed is widely studied as part of the Mediterra- nean Observing System (MOOSE, www.moose-network.fr).

In particular, Alseamar’s gliders performed transects between the time-series station Boussole and Nice harbor which is a reference line, monthly monitored by the R/V Tethys II equipped with a 75 kHz ADCP. Since 2007, the transect is also regularly occupied by gliders but it is the ? rst time one of them was deployed with an ADCP.

The ? rst objective of the missions was to validate our pro- ? le. One method to remove unknown glider motions is the cessing of glider-mounted ADCP data. To this end, glider “shear method”. Taking the vertical difference of raw water measurements were compared with in situ ship-ADCP data velocities for each ensemble provides the shear values be- from the R/V Tethys II, kindly processed and provided by tween cells and removes glider motion and the depth average the DT-INSU data center (http://www.dt.insu.cnrs.fr/spip.

(barotropic) constant. Overlapping shear values were aver- php?article35 ). A pro? le-to-pro? le comparison showed aged over a given interval, set at 2 m in our processing, to a very good accordance between glider and ship-data. The determine a mean shear pro? le for a dive. This pro? le was mean difference was found to be 1.5 cm.s-1, which is very then vertically integrated to obtain a baroclinic velocity pro- satisfactory. ? le. During our missions, most of the time, bottom-tracking

Data also showed that gliders were perfectly capable of data were not available because gliders were operating in catching interesting and known features of the Northwestern deep-waters (bottom depth > 1000 m). Hence, the baroclinic Mediterranean Sea. For example, the Northern current, a per- pro? le was referenced using the displacement of the glider manent ? ow that results from the large-scale thermohaline between two surfacing, known through GPS position, to ob- circulation of the Mediterranean Sea, was regularly sampled. tain the barotropic pro? le. Finally, the absolute water veloc-

In the transect presented here, the ? ow had a westward direc- ity pro? le was obtained by summing the baroclinic and the tion and reached a maximum velocity of 60 cm.s-1, which barotropic pro? le.

agrees with model simulations. The Northern current was lo- cated at around 30 km distance from the coast and had a max-

CASE STUDY: THE MEDITERRANEAN SEA imum vertical extend of 300 m depth on the North edge. At

Five ADCP-glider missions were conducted by Alseamar in 40 km, the current dropped below 10 cm.s-1. The comparison the Northwestern Mediterranean Sea, off the French coast, in between ADCP data and other conventional measurements, concomitantly acquired by the glider (temperature, sa- linity, dissolved oxygen, chlorophyll), also highlights the predominant impact of the current on the vertical distribution of physical and biological parameters. In particular, a coherence between the vertical distribu- tion of current velocity and the density ? eld was ob- served. The Northern current separates the area into light coastal waters and an open-water with higher sur- face densities.

Figure 3. Glider-ADCP data acquired during the mission conducted in February 2018.

The trajectory is superimposed on surface currents estimated by the NEMO v3.6 model (data downloaded on www.marine.