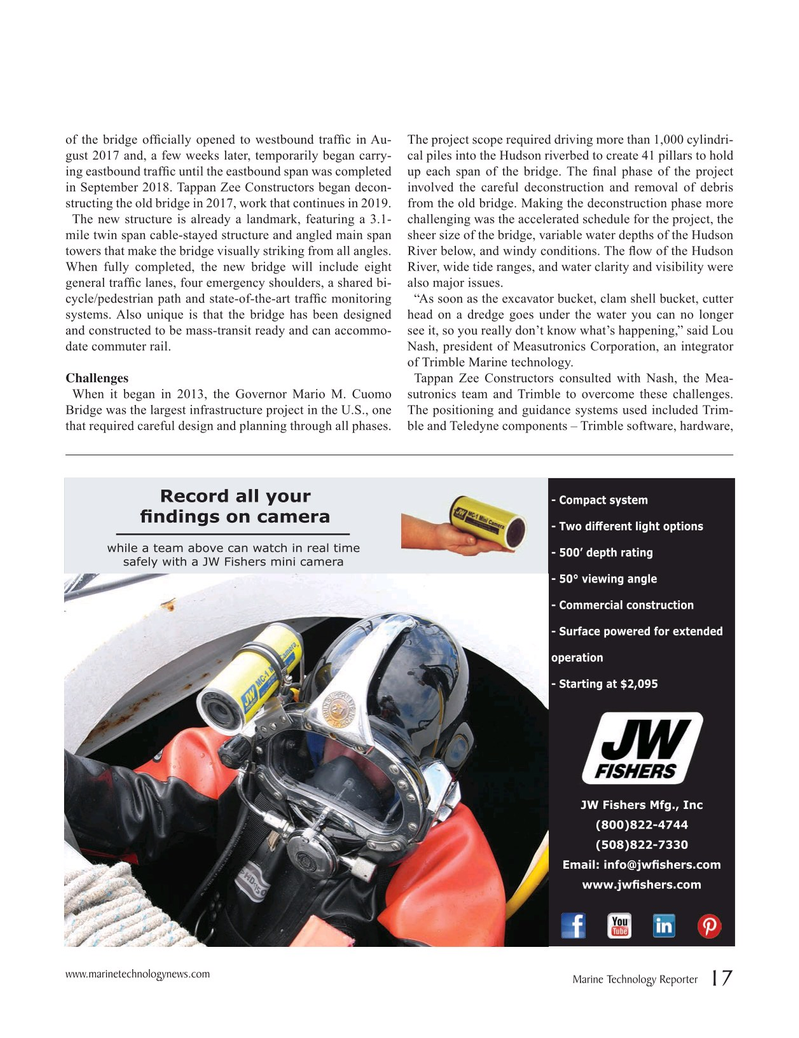 of the bridge of? cially opened to westbound traf? c in Au- The project scope required driving more than 1,000 cylindri- gust 2017 and, a few weeks later, temporarily began carry- cal piles into the Hudson riverbed to create 41 pillars to hold ing eastbound traf? c until the eastbound span was completed up each span of the bridge. The ? nal phase of the project in September 2018. Tappan Zee Constructors began decon- involved the careful deconstruction and removal of debris structing the old bridge in 2017, work that continues in 2019. from the old bridge. Making the deconstruction phase more

The new structure is already a landmark, featuring a 3.1- challenging was the accelerated schedule for the project, the mile twin span cable-stayed structure and angled main span sheer size of the bridge, variable water depths of the Hudson towers that make the bridge visually striking from all angles. River below, and windy conditions. The ? ow of the Hudson

When fully completed, the new bridge will include eight River, wide tide ranges, and water clarity and visibility were general traf? c lanes, four emergency shoulders, a shared bi- also major issues. cycle/pedestrian path and state-of-the-art traf? c monitoring “As soon as the excavator bucket, clam shell bucket, cutter systems. Also unique is that the bridge has been designed head on a dredge goes under the water you can no longer and constructed to be mass-transit ready and can accommo- see it, so you really don’t know what’s happening,” said Lou date commuter rail. Nash, president of Measutronics Corporation, an integrator of Trimble Marine technology.

When it began in 2013, the Governor Mario M. Cuomo sutronics team and Trimble to overcome these challenges.

Bridge was the largest infrastructure project in the U.S., one The positioning and guidance systems used included Trim- that required careful design and planning through all phases. ble and Teledyne components – Trimble software, hardware, 5HFRUGDOO\RXU - Compact system ¿QGLQJVRQFDPHUD 7ZRGL?HUHQWOLJKWRSWLRQV while a team above can watch in real time ¶GHSWKUDWLQJ safely with a JW Fishers mini camera ?YLHZLQJDQJOH &RPPHUFLDOFRQVWUXFWLRQ 6XUIDFHSRZHUHGIRUH[WHQGHG