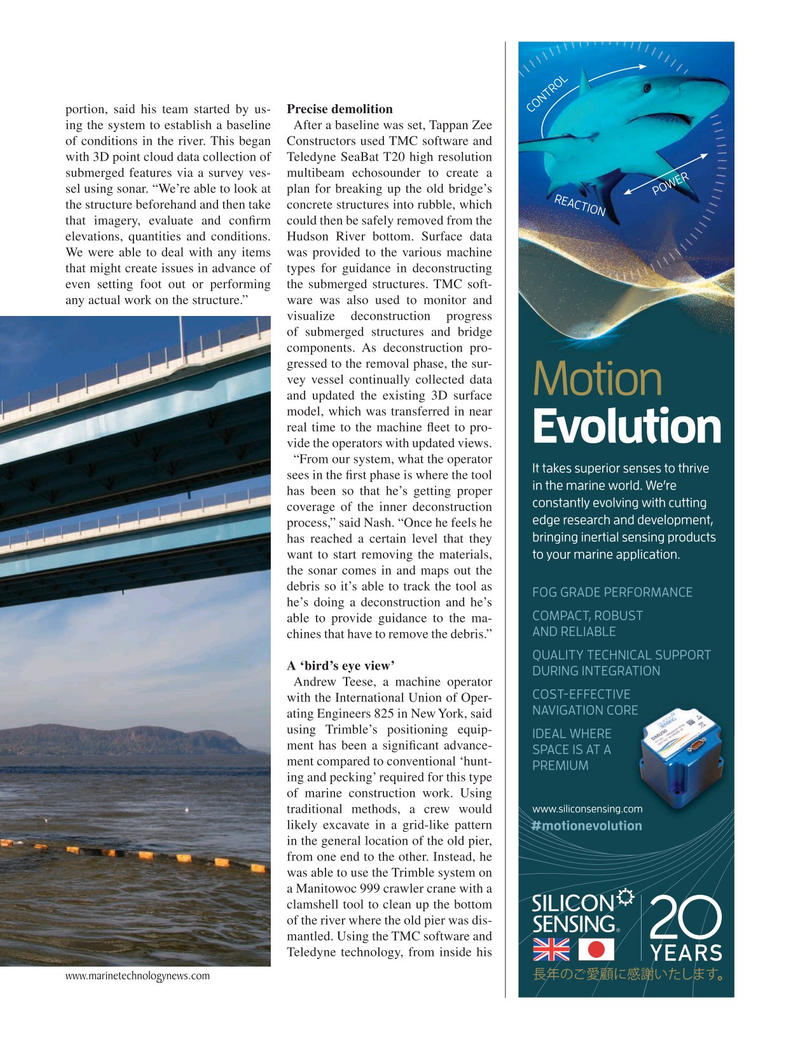 CONTROL portion, said his team started by us- Precise demolition ing the system to establish a baseline After a baseline was set, Tappan Zee of conditions in the river. This began Constructors used TMC software and with 3D point cloud data collection of Teledyne SeaBat T20 high resolution submerged features via a survey ves- multibeam echosounder to create a sel using sonar. “We’re able to look at plan for breaking up the old bridge’s

REACTION the structure beforehand and then take concrete structures into rubble, which that imagery, evaluate and con? rm could then be safely removed from the elevations, quantities and conditions. Hudson River bottom. Surface data

We were able to deal with any items was provided to the various machine that might create issues in advance of types for guidance in deconstructing even setting foot out or performing the submerged structures. TMC soft- any actual work on the structure.” ware was also used to monitor and visualize deconstruction progress of submerged structures and bridge components. As deconstruction pro- gressed to the removal phase, the sur- vey vessel continually collected data

Motion and updated the existing 3D surface model, which was transferred in near real time to the machine ? eet to pro-

It takes superior senses to thrive sees in the ? rst phase is where the tool in the marine world. We’re has been so that he’s getting proper constantly evolving with cutting coverage of the inner deconstruction edge research and development, process,” said Nash. “Once he feels he has reached a certain level that they bringing inertial sensing products want to start removing the materials, to your marine application.

COMPACT, ROBUST able to provide guidance to the ma-

AND RELIABLE chines that have to remove the debris.”

COST-EFFECTIVE with the International Union of Oper-

IDEAL WHERE ment has been a signi? cant advance-

SPACE IS AT A ment compared to conventional ‘hunt-

PREMIUM ing and pecking’ required for this type of marine construction work. Using www.siliconsensing.com traditional methods, a crew would likely excavate in a grid-like pattern #motionevolution in the general location of the old pier, from one end to the other. Instead, he was able to use the Trimble system on a Manitowoc 999 crawler crane with a clamshell tool to clean up the bottom of the river where the old pier was dis- mantled. Using the TMC software and

Teledyne technology, from inside his www.marinetechnologynews.com