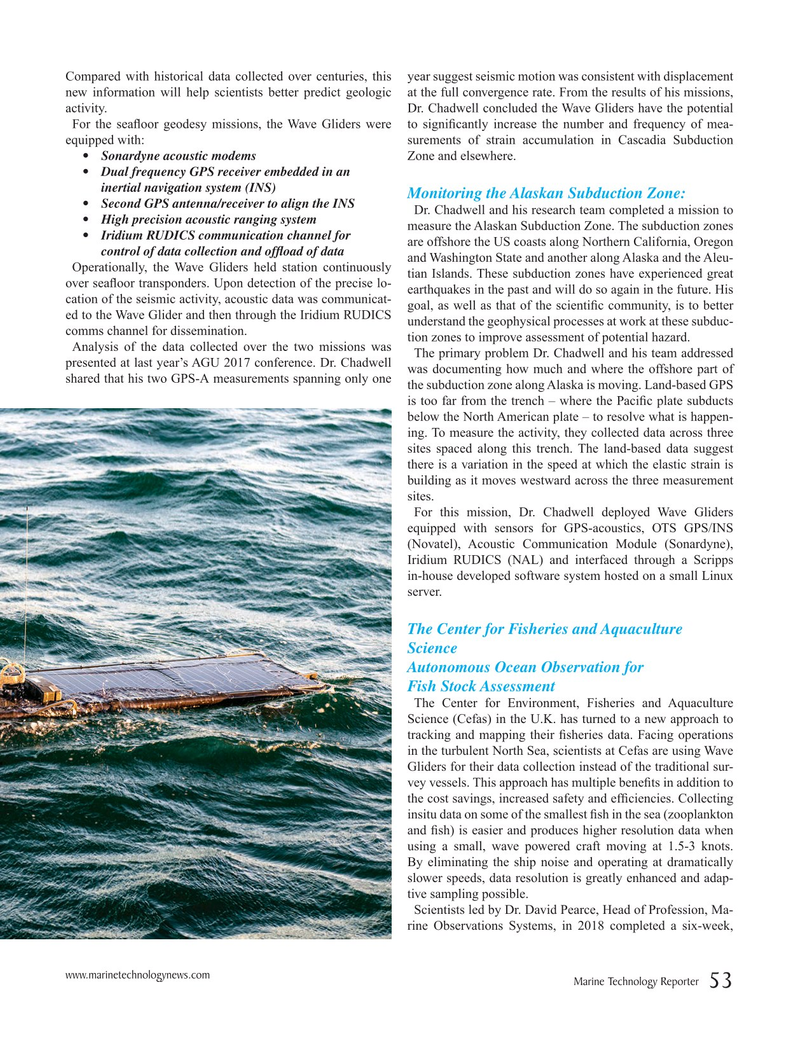 Compared with historical data collected over centuries, this year suggest seismic motion was consistent with displacement new information will help scientists better predict geologic at the full convergence rate. From the results of his missions, activity. Dr. Chadwell concluded the Wave Gliders have the potential

For the sea? oor geodesy missions, the Wave Gliders were to signi? cantly increase the number and frequency of mea- equipped with: surements of strain accumulation in Cascadia Subduction • Sonardyne acoustic modems Zone and elsewhere. • Dual frequency GPS receiver embedded in an inertial navigation system (INS)

Dr. Chadwell and his research team completed a mission to • High precision acoustic ranging system measure the Alaskan Subduction Zone. The subduction zones • Iridium RUDICS communication channel for are offshore the US coasts along Northern California, Oregon control of data collection and of? oad of data and Washington State and another along Alaska and the Aleu-

Operationally, the Wave Gliders held station continuously tian Islands. These subduction zones have experienced great over sea? oor transponders. Upon detection of the precise lo- earthquakes in the past and will do so again in the future. His cation of the seismic activity, acoustic data was communicat- goal, as well as that of the scienti? c community, is to better ed to the Wave Glider and then through the Iridium RUDICS understand the geophysical processes at work at these subduc- comms channel for dissemination. tion zones to improve assessment of potential hazard.

Analysis of the data collected over the two missions was

The primary problem Dr. Chadwell and his team addressed presented at last year’s AGU 2017 conference. Dr. Chadwell was documenting how much and where the offshore part of shared that his two GPS-A measurements spanning only one the subduction zone along Alaska is moving. Land-based GPS is too far from the trench – where the Paci? c plate subducts below the North American plate – to resolve what is happen- ing. To measure the activity, they collected data across three sites spaced along this trench. The land-based data suggest there is a variation in the speed at which the elastic strain is building as it moves westward across the three measurement sites.

The Center for Fisheries and Aquaculture

The Center for Environment, Fisheries and Aquaculture

Science (Cefas) in the U.K. has turned to a new approach to tracking and mapping their ? sheries data. Facing operations in the turbulent North Sea, scientists at Cefas are using Wave

Gliders for their data collection instead of the traditional sur- vey vessels. This approach has multiple bene? ts in addition to the cost savings, increased safety and ef? ciencies. Collecting insitu data on some of the smallest ? sh in the sea (zooplankton and ? sh) is easier and produces higher resolution data when using a small, wave powered craft moving at 1.5-3 knots.