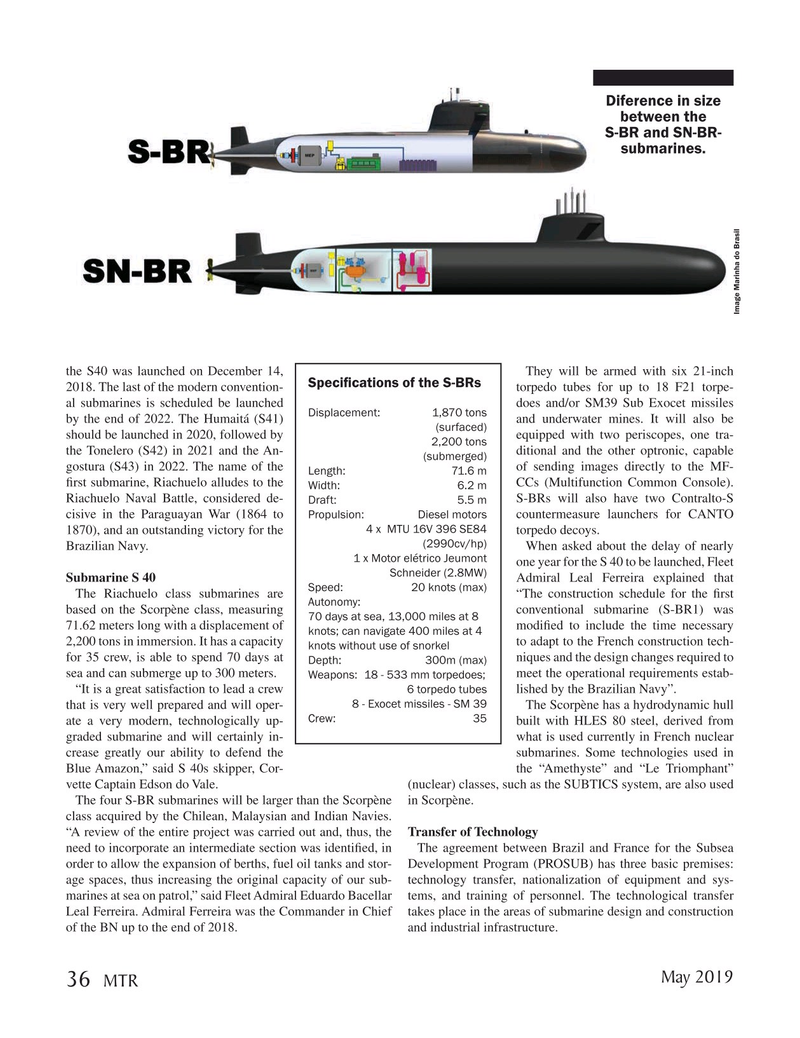 Diference in size between the

Image Marinha do Brasil the S40 was launched on December 14, They will be armed with six 21-inch

Speci? cations of the S-BRs 2018. The last of the modern convention- torpedo tubes for up to 18 F21 torpe- al submarines is scheduled be launched does and/or SM39 Sub Exocet missiles

Draft: 5.5 m cisive in the Paraguayan War (1864 to countermeasure launchers for CANTO

Brazilian Navy. When asked about the delay of nearly 1 x Motor elétrico Jeumont one year for the S 40 to be launched, Fleet Schneider (2.8MW)

The Riachuelo class submarines are “The construction schedule for the ? rst

Autonomy: based on the Scorpène class, measuring conventional submarine (S-BR1) was 70 days at sea, 13,000 miles at 8 71.62 meters long with a displacement of modi? ed to include the time necessary knots; can navigate 400 miles at 4 2,200 tons in immersion. It has a capacity to adapt to the French construction tech- knots without use of snorkel for 35 crew, is able to spend 70 days at niques and the design changes required to

Depth: 300m (max) sea and can submerge up to 300 meters. meet the operational requirements estab-

Weapons: 18 - 533 mm torpedoes; “It is a great satisfaction to lead a crew lished by the Brazilian Navy”. 6 torpedo tubes 8 - Exocet missiles - SM 39 that is very well prepared and will oper- The Scorpène has a hydrodynamic hull

Crew: 35 ate a very modern, technologically up- built with HLES 80 steel, derived from graded submarine and will certainly in- what is used currently in French nuclear crease greatly our ability to defend the submarines. Some technologies used in

class acquired by the Chilean, Malaysian and Indian Navies. “A review of the entire project was carried out and, thus, the Transfer of Technology need to incorporate an intermediate section was identi? ed, in The agreement between Brazil and France for the Subsea order to allow the expansion of berths, fuel oil tanks and stor- Development Program (PROSUB) has three basic premises: age spaces, thus increasing the original capacity of our sub- technology transfer, nationalization of equipment and sys- marines at sea on patrol,” said Fleet Admiral Eduardo Bacellar tems, and training of personnel. The technological transfer

Leal Ferreira. Admiral Ferreira was the Commander in Chief takes place in the areas of submarine design and construction of the BN up to the end of 2018. and industrial infrastructure.