Autonomous Navigation – with or without GNSS

Use of uncrewed surface vehicles (USVs) as operational tools in their own right is gaining increasing traction. From harbour patrol to offshore wind operations, USVs and autonomous shipping are seen as an opportunity to reduce cost, risk to humans and our carbon footprints.
But they don’t come without challenges. Because they’re unmanned and require control remotely, we are even more reliant on having accurate navigation systems onboard and currently that largely rests on Global Navigation Satellite Systems (GNSS).

As a primary navigation source, GNSS is well used, but there are conditions where purely relying on it could create some risks. This could be where line of sight to a GNSS constellation is lost while transiting under bridges or through busy harbours, or near significant structures, such as wind turbines, offshore platforms or port infrastructure. Some of these areas are where you most don’t want to lose signal. Another risk that’s less likely, but is still there, is jamming or spoofing where someone deliberately decides to disrupt GNSS signals.

These aren’t new issues, not terrestrially at least. Self-driving or autonomous vehicles on our roads have been developing a mix of capabilities to ensure safe and accurate navigation for some time. They’re using sensor suites which fuse a mix of camera, radar, onboard sensors and inertial navigation system (INS) technologies in order make sure that these vehicles still know where they are. Use of an INS with multiple aiding inputs such as GNSS and Lidar allows the ability to better identify errors or outliers in the observation data; these observations can then be rejected providing more reliable and accurate navigation of the vehicle.

A similar approach is being taken for USVs in the offshore domain. Here, additional inertial and acoustic sensors are now being used to help underpin navigation, so that a vessel still knows where it is, with or without a GNSS signal.  In certain cases, erroneous outlier GNSS positions can be identified and rejected. Some examples might include temporary loss of correction data or short term multipath or constellation obstruction from a nearby structure.

The approach for USVs is slightly different, but it’s based on technologies we already have available to us today; i.e. hybrid guidance and navigation systems used for underwater vehicles. These technologies have been developed and used on systems such as remotely operated vehicles (ROVs) and autonomous/unmanned underwater vehicles (AUV/UUVs) that cannot use GNSS positioning for navigation, because the signals used do not travel well through water. This means that underwater systems require their own inertial and acoustic sensors to calculate their position.

A common approach is using a Doppler velocity log (DVLs), which measure a vehicle’s speed in relation to the seabed it’s travelling over. But a source of error in DVLs is that they do not compensate optimally for vehicle movement and often most, if not all, of their transducers need to receive a return from the seabed to compute a velocity. This means motion compensation is required, through the use of a separate orientation instrument. In addition, the DVL needs to be timed correctly with other instruments it will be working with and positioned correctly on the vehicle. Underwater vehicles also need to know their depth, so a pressure sensor also has to be integrated into this mix. It can get complicated, very quickly, and if each of these elements has even a small error, this will propagate and create system error that might no longer be suitable. 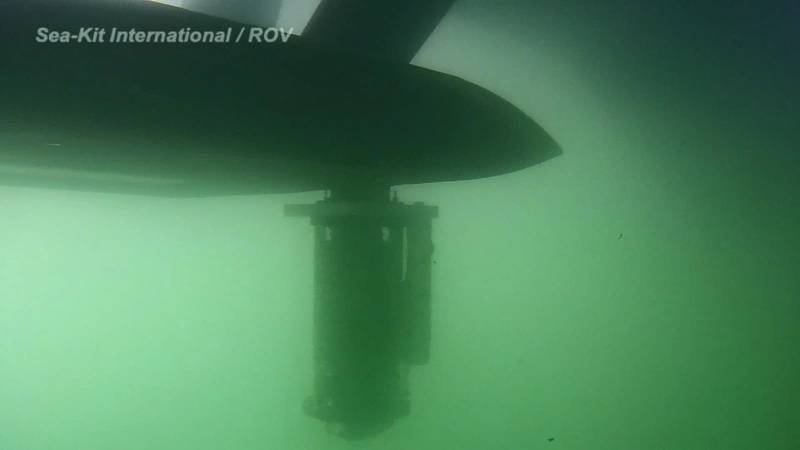 A solution to this is a single instrument that combines, at very low level, the DVL and an inertial navigation system (INS). That’s been achieved with SPRINT-Nav, which is what we call a hybrid acoustic-inertial navigation system, where an INS and acoustics (i.e. the DVL), and a highly accurate pressure sensor, are tightly integrated, physically and algorithmically, to create a single, high performance navigation solution.

SPRINT-Nav uses a SPRINT INS and Syrinx DVL. Because the single SPRINT-Nav instrument has an INS inside it, it optimally compensates for the motion of the DVL. It also needs fewer beams to navigate because individual beam observations are used by the INS and it then decides whether it’s going to use or reject them, based on how accurate the beam data is. It can do all of that, because it already has an idea of its own motion and a mathematical model for what works and what doesn’t, which a DVL on its own doesn’t have.

The benefits of such a tightly coupled system are: individual beam aiding, optimum motion compensation, perfect timing, not having to perform calibrations or work out offsets because it comes pre-calibrated in a single system and a generating higher performance than the sum of its individual parts.

The theory is good and the system is proven onboard ROV and AUV systems globally; from the most demanding survey ROV operations to long-range AUVs. But how easy is it to deploy on a USV?

Actually very easy. Last year, through a UK Defence Science and Technology Laboratory (DSTL) and Defence and Security Accelerator (DASA) funded demonstration, we worked with USV manufacturer SEA-KIT to demonstrate SPRINT-Nav capability onboard a USV.
We installed the system on a gondola on the 12m-long SEA-KIT X class USV, and tested it against the local real-time kinematic (RTK) GNSS. It was sent on a number of different missions from our base in Plymouth to several miles offshore, covering different seabed types, sea states, altitudes and seabed gradients. We simulated a transit, survey lines and a transit back to a static mooring, similar to what might be expected on a survey operation, as shown in the top plot (Fig.1).

The bottom plot in Fig. 1 shows position difference between SPRINT-Nav, which had no external aiding, and the reference RTK GNSS. The overall error over a 35km run over a long time period was only 1.8m. That equates to 0.0051% of distance travelled, which is really unpreceded in terms of GNSS-denied navigation from a commercially available product. In reality, no USV mission would likely to be without a GNSS fix for this length of time, but it shows the accuracy that can be achieved in order to ride out and cross reference any GNSS issues.

The demonstration also looked at static operations, i.e. station keeping. The vessel was station-keeping to within a 1m or so over a 16-hour period. At the end of the period, the error was within 1m, showing that the performance is also there for static applications.

In reality, a vessel may be trying to use this capability very close to seabed obstructions or a structure such as on offshore wind turbine. So we also demonstrated what happens if some of the DVL beams are obscured from reaching the seabed by the structure, the SPRINT-Nav was able to achieve high levels of accuracy even with multiple beams unavailable. 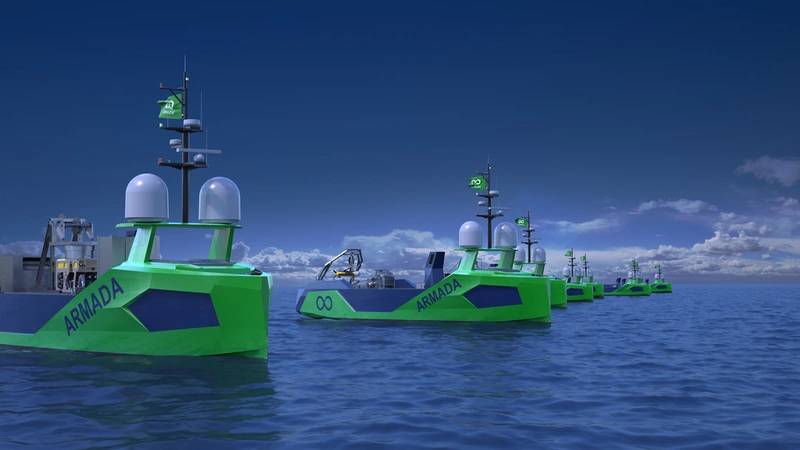 Concurrent to developments towards supporting USV navigation, we’ve also built acoustic Doppler current profiler (ADCP) capability into SPRINT-Nav down to 80 m. This enables the collection of water column data at beam level, without disrupting the DVL’s bottom tracking capability as the two modes can run in parallel. Again, because SPRINT-Nav has highly accurate knowledge of its motion and position it can automatically compensate the raw data to give a very accurate real-world picture of the water column in terms of position and with vessel motion compensated for. This negates the need to integrate separate ADCP and motion sensor data and dramatically reduces the reliance of continuous and accurate GNSS data during dynamic water column data collection operations. In addition, if you are in deep water and don’t have bottom lock, but you do have GNSS, the SPRINT inertial measurements can compensate for vessel motion in the ADCP data. 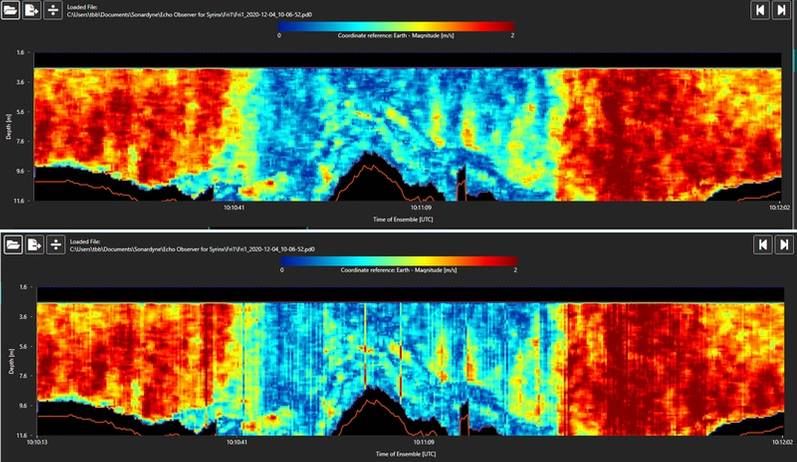 The combination of highly accurate navigation and the ability measure water current optimally without GNSS significantly reduces the risk of performing ROV and AUV deployments from USV host platforms.

A good example of this is the Armada fleet, being built by Ocean Infinity. The first wave of the fleet will host our Ranger 2 Ultra-Short BaseLine (USBL) positioning system and Marine Robotics pack, which will enable all-in-one tracking, communications and control capability for underwater payload robotics from the Armada vessels. In addition, the vessels will be fitted with SPRINT-Nav, to provide continuous, uninterrupted navigational aiding to underpin safe remote operations, even if GNSS service is impaired. The underwater vehicles deployed by these USVs will also have SPRINT-Nav systems and our Wideband Sub Mini 6+ tracking transponders that work using the same common hardware as Ranger 2.

A further development we’ve initiated over the last year has been to create a higher altitude version of our Syrinx DVL. At launch SPRINT-Nav was only available with a 600 kHz Syrinx DVL. Now a 400kHz option is available which can achieve reliable bottom lock down to 220 m water depth (it’s 175 m in the standard SPRINT-Nav) and ADCP functionality to 120 m. Integrated into SPRINT-Nav, this extends the range to which USVs can go with this higher altitude bottom tracking capability.

In summary, USV operations are increasing. Integrating a USV with additional sensors that reduce their otherwise critical reliance on GNSS signals reduces operational risks, especially when operating close to infrastructure, holding station or while deploying or recovering another vehicle. Similarly, this data provides high accuracy for any mapping tasks the vehicle might undertake, to ensure that they are accurately compensating data or imagery, even if it’s difficult to get an external position.

About the Author: Malik Chibah joined Sonardyne in 2003 and became Engineering Director last year. He oversees the development and delivery of all products and systems, including those for marine autonomy applications. Before joining Sonardyne, Malik spent nine years working in the software industry on various development and systems integration projects. He has an MSc in Hydrographic Survey from University College London. 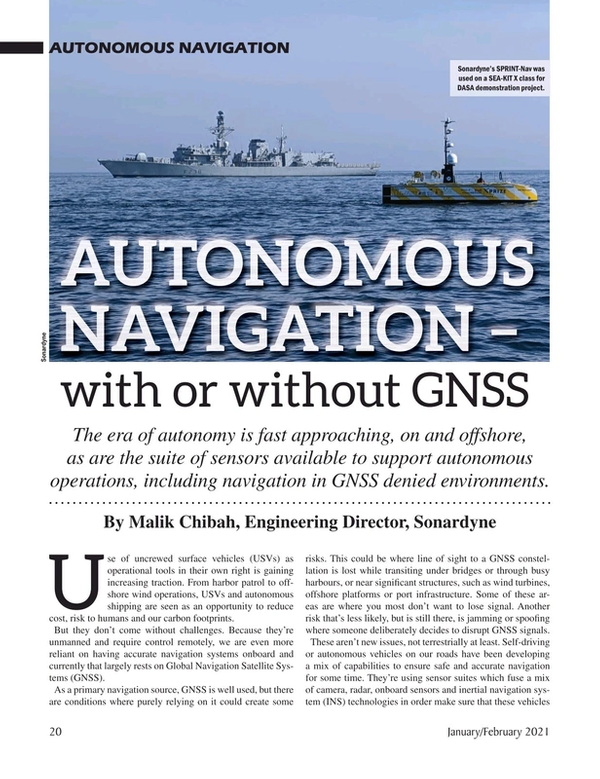 Read Autonomous Navigation – with or without GNSS in Pdf, Flash or Html5 edition of January 2021 Marine Technology