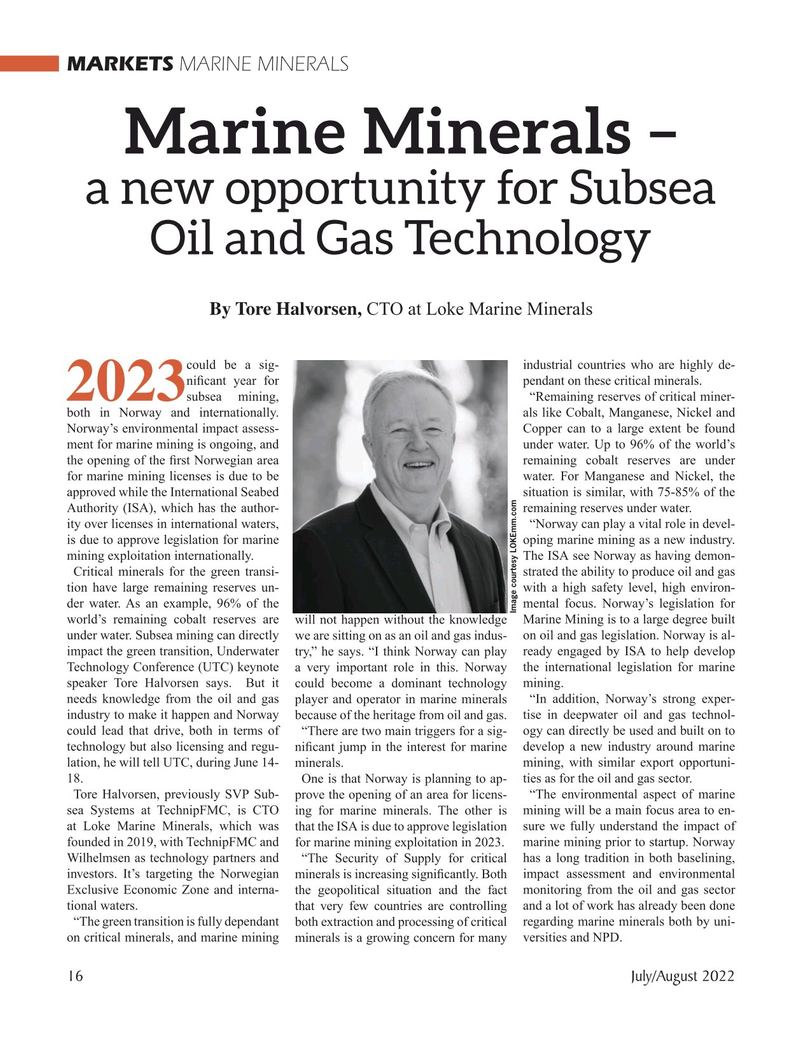 By Tore Halvorsen, CTO at Loke Marine Minerals could be a sig- industrial countries who are highly de- ni? cant year for pendant on these critical minerals.

2023 subsea mining, “Remaining reserves of critical miner- both in Norway and internationally. als like Cobalt, Manganese, Nickel and

Norway’s environmental impact assess- Copper can to a large extent be found ment for marine mining is ongoing, and under water. Up to 96% of the world’s the opening of the ? rst Norwegian area remaining cobalt reserves are under for marine mining licenses is due to be water. For Manganese and Nickel, the approved while the International Seabed situation is similar, with 75-85% of the

Authority (ISA), which has the author- remaining reserves under water.

ity over licenses in international waters, “Norway can play a vital role in devel- is due to approve legislation for marine oping marine mining as a new industry. mining exploitation internationally. The ISA see Norway as having demon-

Critical minerals for the green transi- strated the ability to produce oil and gas tion have large remaining reserves un- with a high safety level, high environ- der water. As an example, 96% of the mental focus. Norway’s legislation for

Image courtesy LOKEmm.com world’s remaining cobalt reserves are will not happen without the knowledge Marine Mining is to a large degree built under water. Subsea mining can directly we are sitting on as an oil and gas indus- on oil and gas legislation. Norway is al- impact the green transition, Underwater try,” he says. “I think Norway can play ready engaged by ISA to help develop

Technology Conference (UTC) keynote a very important role in this. Norway the international legislation for marine speaker Tore Halvorsen says. But it could become a dominant technology mining.

needs knowledge from the oil and gas player and operator in marine minerals “In addition, Norway’s strong exper- industry to make it happen and Norway because of the heritage from oil and gas. tise in deepwater oil and gas technol- could lead that drive, both in terms of “There are two main triggers for a sig- ogy can directly be used and built on to technology but also licensing and regu- ni? cant jump in the interest for marine develop a new industry around marine lation, he will tell UTC, during June 14- minerals. mining, with similar export opportuni- 18. One is that Norway is planning to ap- ties as for the oil and gas sector.

Tore Halvorsen, previously SVP Sub- prove the opening of an area for licens- “The environmental aspect of marine sea Systems at TechnipFMC, is CTO ing for marine minerals. The other is mining will be a main focus area to en- at Loke Marine Minerals, which was that the ISA is due to approve legislation sure we fully understand the impact of founded in 2019, with TechnipFMC and for marine mining exploitation in 2023. marine mining prior to startup. Norway

Wilhelmsen as technology partners and “The Security of Supply for critical has a long tradition in both baselining, investors. It’s targeting the Norwegian minerals is increasing signi? cantly. Both impact assessment and environmental

Exclusive Economic Zone and interna- the geopolitical situation and the fact monitoring from the oil and gas sector tional waters. that very few countries are controlling and a lot of work has already been done “The green transition is fully dependant both extraction and processing of critical regarding marine minerals both by uni- on critical minerals, and marine mining minerals is a growing concern for many versities and NPD.