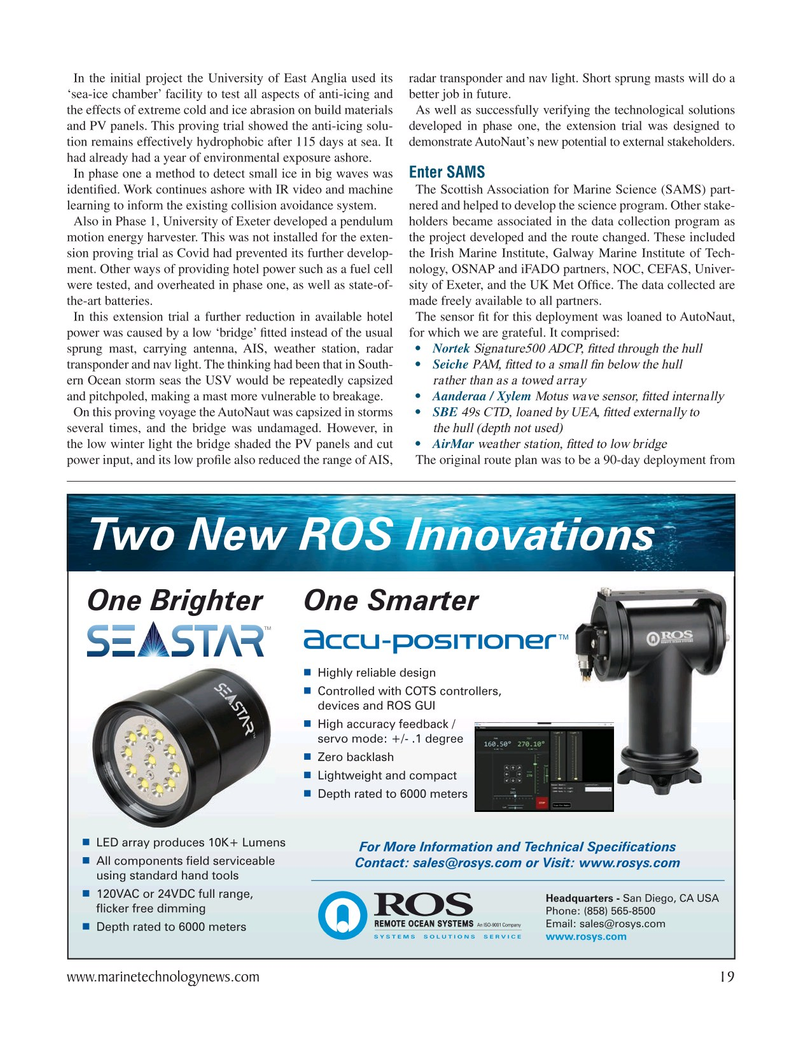 In the initial project the University of East Anglia used its radar transponder and nav light. Short sprung masts will do a ‘sea-ice chamber’ facility to test all aspects of anti-icing and better job in future.

the effects of extreme cold and ice abrasion on build materials As well as successfully verifying the technological solutions and PV panels. This proving trial showed the anti-icing solu- developed in phase one, the extension trial was designed to tion remains effectively hydrophobic after 115 days at sea. It demonstrate AutoNaut’s new potential to external stakeholders. had already had a year of environmental exposure ashore.

Also in Phase 1, University of Exeter developed a pendulum holders became associated in the data collection program as motion energy harvester. This was not installed for the exten- the project developed and the route changed. These included sion proving trial as Covid had prevented its further develop- the Irish Marine Institute, Galway Marine Institute of Tech- ment. Other ways of providing hotel power such as a fuel cell nology, OSNAP and iFADO partners, NOC, CEFAS, Univer- were tested, and overheated in phase one, as well as state-of- sity of Exeter, and the UK Met Of? ce. The data collected are the-art batteries. made freely available to all partners.

In this extension trial a further reduction in available hotel The sensor ? t for this deployment was loaned to AutoNaut, power was caused by a low ‘bridge’ ? tted instead of the usual for which we are grateful. It comprised: sprung mast, carrying antenna, AIS, weather station, radar • Nortek Signature500 ADCP, ? tted through the hull transponder and nav light. The thinking had been that in South- • Seiche PAM, ? tted to a small ? n below the hull ern Ocean storm seas the USV would be repeatedly capsized rather than as a towed array and pitchpoled, making a mast more vulnerable to breakage. • Aanderaa / Xylem Motus wave sensor, ? tted internally

On this proving voyage the AutoNaut was capsized in storms • SBE 49s CTD, loaned by UEA, ? tted externally to several times, and the bridge was undamaged. However, in the hull (depth not used) the low winter light the bridge shaded the PV panels and cut • AirMar weather station, ? tted to low bridge power input, and its low pro? le also reduced the range of AIS, The original route plan was to be a 90-day deployment from 7ZR1HZ526,QQRYDWLRQV 2QH%ULJKWHU2QH6PDUWHU