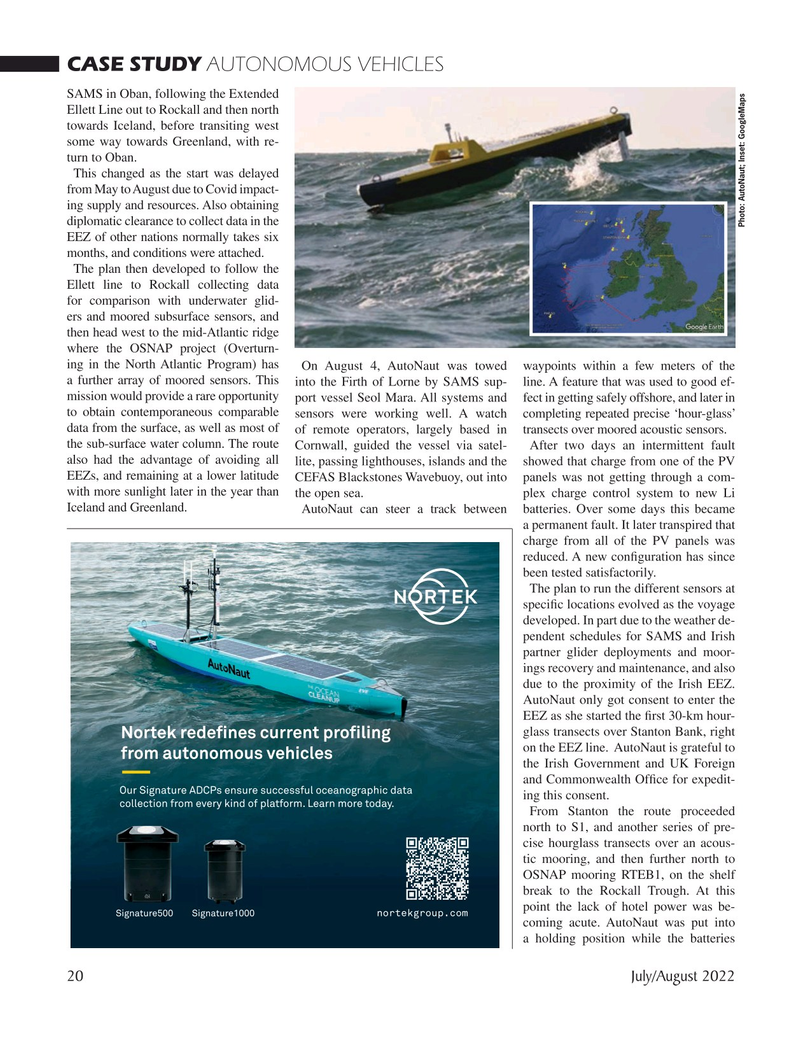 SAMS in Oban, following the Extended

Ellett Line out to Rockall and then north towards Iceland, before transiting west some way towards Greenland, with re- turn to Oban.

This changed as the start was delayed from May to August due to Covid impact- ing supply and resources. Also obtaining diplomatic clearance to collect data in the

EEZ of other nations normally takes six months, and conditions were attached.

Ellett line to Rockall collecting data for comparison with underwater glid- ers and moored subsurface sensors, and then head west to the mid-Atlantic ridge where the OSNAP project (Overturn- ing in the North Atlantic Program) has

On August 4, AutoNaut was towed waypoints within a few meters of the a further array of moored sensors. This into the Firth of Lorne by SAMS sup- line. A feature that was used to good ef- mission would provide a rare opportunity port vessel Seol Mara. All systems and fect in getting safely offshore, and later in to obtain contemporaneous comparable sensors were working well. A watch completing repeated precise ‘hour-glass’ data from the surface, as well as most of of remote operators, largely based in transects over moored acoustic sensors. the sub-surface water column. The route Cornwall, guided the vessel via satel- After two days an intermittent fault also had the advantage of avoiding all lite, passing lighthouses, islands and the showed that charge from one of the PV

EEZs, and remaining at a lower latitude CEFAS Blackstones Wavebuoy, out into panels was not getting through a com- with more sunlight later in the year than the open sea. plex charge control system to new Li

AutoNaut can steer a track between batteries. Over some days this became a permanent fault. It later transpired that charge from all of the PV panels was reduced. A new con? guration has since been tested satisfactorily.

The plan to run the different sensors at speci? c locations evolved as the voyage developed. In part due to the weather de- pendent schedules for SAMS and Irish partner glider deployments and moor- ings recovery and maintenance, and also due to the proximity of the Irish EEZ.

AutoNaut only got consent to enter the

EEZ as she started the ? rst 30-km hour- glass transects over Stanton Bank, right rent pro?ling Nortek rede?nes current pro?ling on the EEZ line. AutoNaut is grateful to hil from autonomous vehicles the Irish Government and UK Foreign and Commonwealth Of? ce for expedit-

collection from every kind of platform. Learn more today.

From Stanton the route proceeded north to S1, and another series of pre- cise hourglass transects over an acous- tic mooring, and then further north to

OSNAP mooring RTEB1, on the shelf break to the Rockall Trough. At this point the lack of hotel power was be- nortekgroup.com

Signature500Signature1000 coming acute. AutoNaut was put into a holding position while the batteries 20 July/August 2022