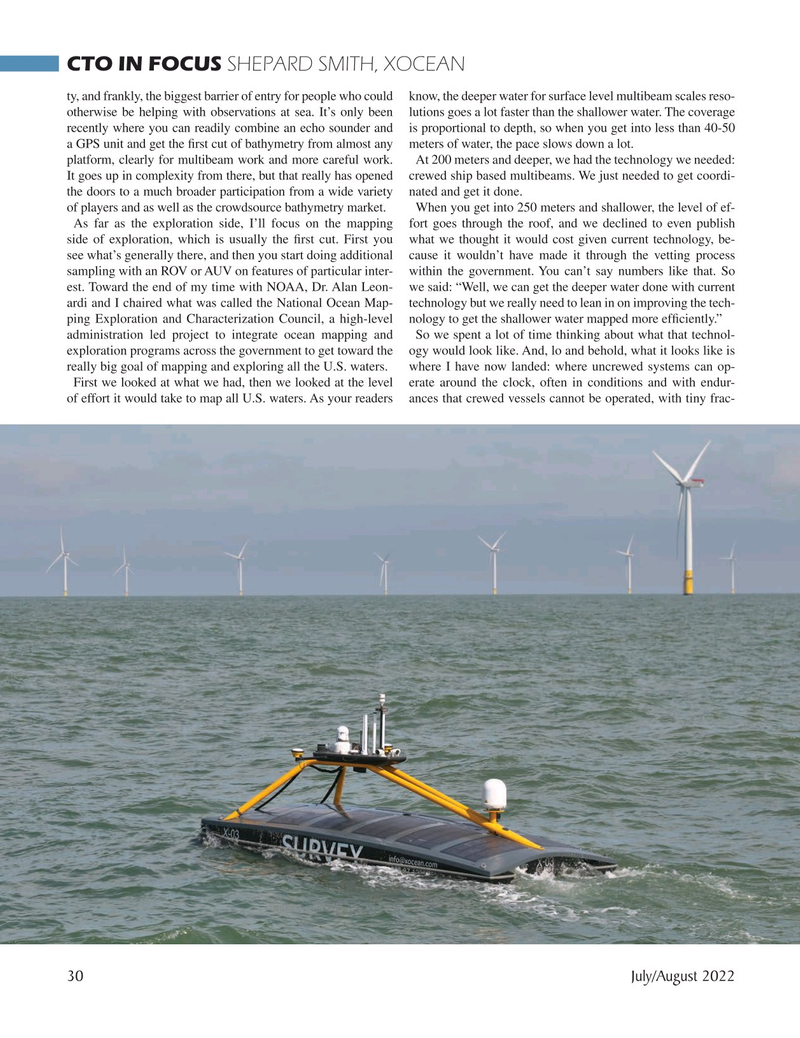 CTO IN FOCUS SHEPARD SMITH, XOCEAN ty, and frankly, the biggest barrier of entry for people who could know, the deeper water for surface level multibeam scales reso- otherwise be helping with observations at sea. It’s only been lutions goes a lot faster than the shallower water. The coverage recently where you can readily combine an echo sounder and is proportional to depth, so when you get into less than 40-50 a GPS unit and get the ? rst cut of bathymetry from almost any meters of water, the pace slows down a lot. platform, clearly for multibeam work and more careful work. At 200 meters and deeper, we had the technology we needed:

It goes up in complexity from there, but that really has opened crewed ship based multibeams. We just needed to get coordi- the doors to a much broader participation from a wide variety nated and get it done.

of players and as well as the crowdsource bathymetry market. When you get into 250 meters and shallower, the level of ef-

As far as the exploration side, I’ll focus on the mapping fort goes through the roof, and we declined to even publish side of exploration, which is usually the ? rst cut. First you what we thought it would cost given current technology, be- see what’s generally there, and then you start doing additional cause it wouldn’t have made it through the vetting process sampling with an ROV or AUV on features of particular inter- within the government. You can’t say numbers like that. So est. Toward the end of my time with NOAA, Dr. Alan Leon- we said: “Well, we can get the deeper water done with current ardi and I chaired what was called the National Ocean Map- technology but we really need to lean in on improving the tech- ping Exploration and Characterization Council, a high-level nology to get the shallower water mapped more ef? ciently.” administration led project to integrate ocean mapping and So we spent a lot of time thinking about what that technol- exploration programs across the government to get toward the ogy would look like. And, lo and behold, what it looks like is really big goal of mapping and exploring all the U.S. waters. where I have now landed: where uncrewed systems can op-

First we looked at what we had, then we looked at the level erate around the clock, often in conditions and with endur- of effort it would take to map all U.S. waters. As your readers ances that crewed vessels cannot be operated, with tiny frac- 30 July/August 2022