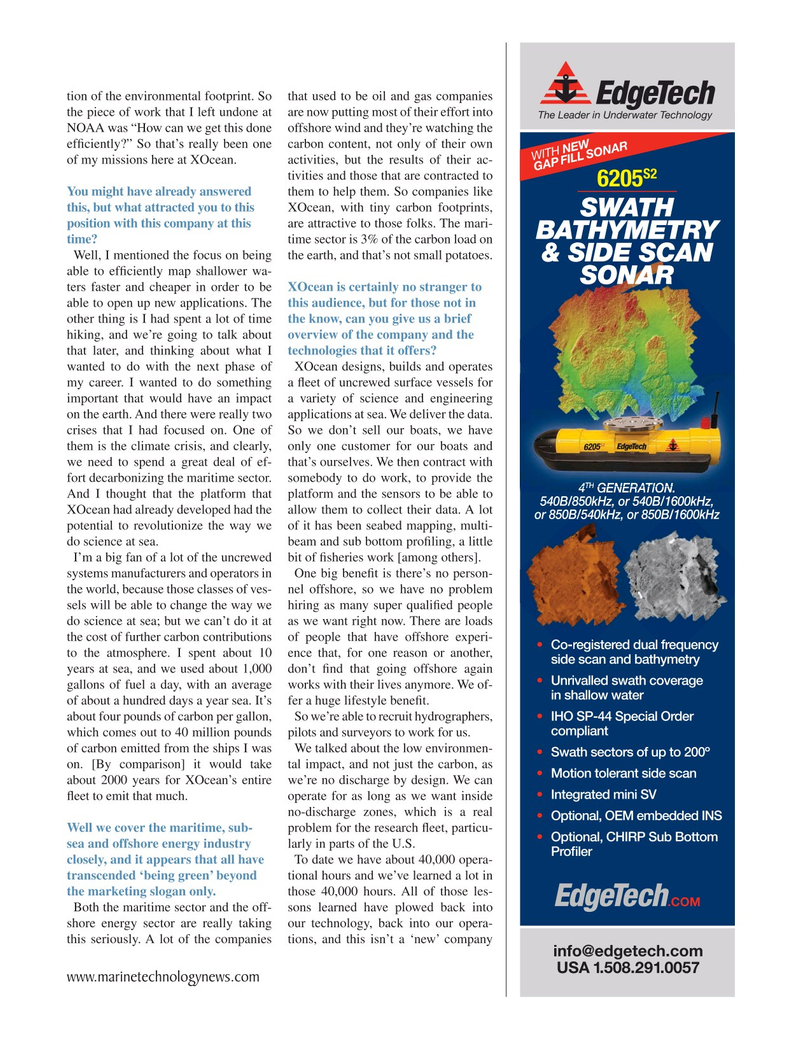 tion of the environmental footprint. So that used to be oil and gas companies the piece of work that I left undone at are now putting most of their effort into

NOAA was “How can we get this done offshore wind and they’re watching the ef? ciently?” So that’s really been one carbon content, not only of their own

WITH NEW of my missions here at XOcean. activities, but the results of their ac-

S2 tivities and those that are contracted to 6205

You might have already answered them to help them. So companies like this, but what attracted you to this XOcean, with tiny carbon footprints,

SWATH position with this company at this are attractive to those folks. The mari-

BATHYMETRY time? time sector is 3% of the carbon load on

Well, I mentioned the focus on being the earth, and that’s not small potatoes.

SONAR ters faster and cheaper in order to be XOcean is certainly no stranger to able to open up new applications. The this audience, but for those not in other thing is I had spent a lot of time the know, can you give us a brief hiking, and we’re going to talk about overview of the company and the that later, and thinking about what I technologies that it offers?

wanted to do with the next phase of XOcean designs, builds and operates my career. I wanted to do something a ? eet of uncrewed surface vessels for important that would have an impact a variety of science and engineering on the earth. And there were really two applications at sea. We deliver the data. crises that I had focused on. One of So we don’t sell our boats, we have them is the climate crisis, and clearly, only one customer for our boats and we need to spend a great deal of ef- that’s ourselves. We then contract with fort decarbonizing the maritime sector. somebody to do work, to provide the

XOcean had already developed had the allow them to collect their data. A lot or 850B/540kHz, or 850B/1600kHz potential to revolutionize the way we of it has been seabed mapping, multi- do science at sea. beam and sub bottom pro? ling, a little

I’m a big fan of a lot of the uncrewed bit of ? sheries work [among others]. systems manufacturers and operators in One big bene? t is there’s no person- the world, because those classes of ves- nel offshore, so we have no problem sels will be able to change the way we hiring as many super quali? ed people do science at sea; but we can’t do it at as we want right now. There are loads the cost of further carbon contributions of people that have offshore experi- • Co-registered dual frequency to the atmosphere. I spent about 10 ence that, for one reason or another, side scan and bathymetry years at sea, and we used about 1,000 don’t ? nd that going offshore again • Unrivalled swath coverage gallons of fuel a day, with an average works with their lives anymore. We of- in shallow water of about a hundred days a year sea. It’s fer a huge lifestyle bene? t.

So we’re able to recruit hydrographers, about four pounds of carbon per gallon, • IHO SP-44 Special Order which comes out to 40 million pounds pilots and surveyors to work for us. compliant of carbon emitted from the ships I was We talked about the low environmen- • Swath sectors of up to 200º on. [By comparison] it would take tal impact, and not just the carbon, as • Motion tolerant side scan about 2000 years for XOcean’s entire we’re no discharge by design. We can operate for as long as we want inside ? eet to emit that much. • Integrated mini SV no-discharge zones, which is a real • Optional, OEM embedded INS

3URðOHU closely, and it appears that all have To date we have about 40,000 opera- transcended ‘being green’ beyond tional hours and we’ve learned a lot in the marketing slogan only. those 40,000 hours. All of those les-

Both the maritime sector and the off- sons learned have plowed back into shore energy sector are really taking our technology, back into our opera- this seriously. A lot of the companies tions, and this isn’t a ‘new’ company www.marinetechnologynews.com