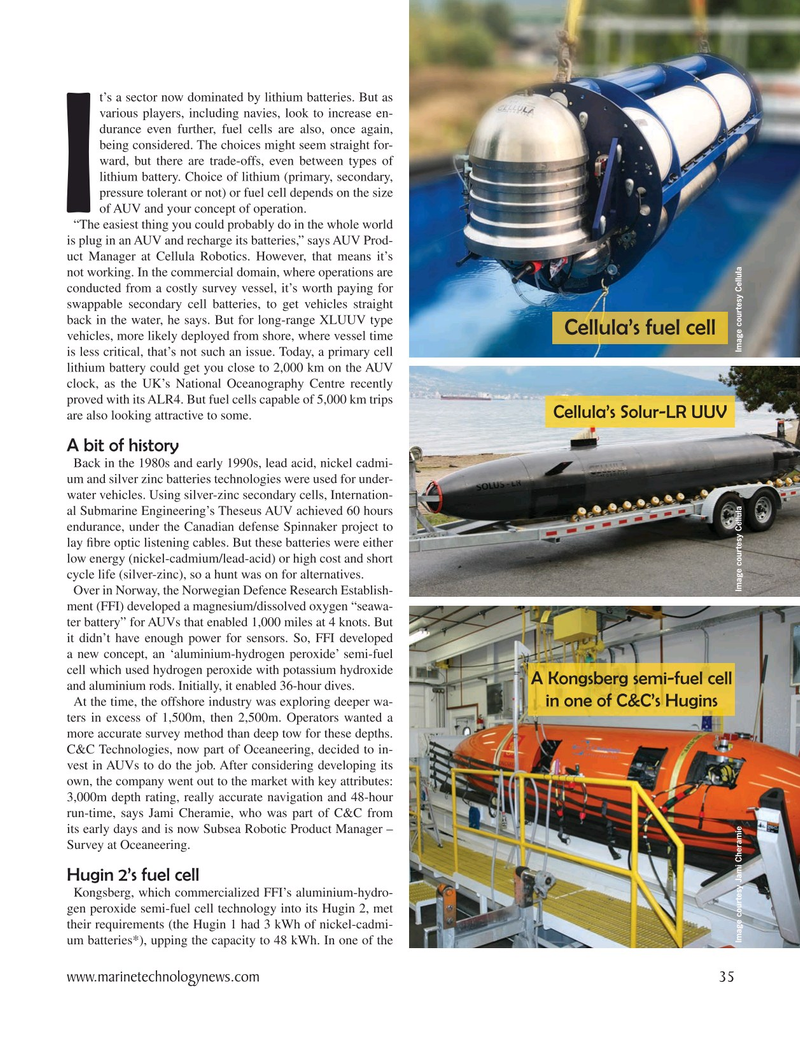 t’s a sector now dominated by lithium batteries. But as various players, including navies, look to increase en- durance even further, fuel cells are also, once again, being considered. The choices might seem straight for- ward, but there are trade-offs, even between types of lithium battery. Choice of lithium (primary, secondary, pressure tolerant or not) or fuel cell depends on the size

Iof AUV and your concept of operation. “The easiest thing you could probably do in the whole world is plug in an AUV and recharge its batteries,” says AUV Prod- uct Manager at Cellula Robotics. However, that means it’s not working. In the commercial domain, where operations are conducted from a costly survey vessel, it’s worth paying for swappable secondary cell batteries, to get vehicles straight back in the water, he says. But for long-range XLUUV type

Cellula’s fuel cell vehicles, more likely deployed from shore, where vessel time is less critical, that’s not such an issue. Today, a primary cell lithium battery could get you close to 2,000 km on the AUV clock, as the UK’s National Oceanography Centre recently proved with its ALR4. But fuel cells capable of 5,000 km trips

A bit of history

Back in the 1980s and early 1990s, lead acid, nickel cadmi- um and silver zinc batteries technologies were used for under- water vehicles. Using silver-zinc secondary cells, Internation- al Submarine Engineering’s Theseus AUV achieved 60 hours endurance, under the Canadian defense Spinnaker project to lay ? bre optic listening cables. But these batteries were either low energy (nickel-cadmium/lead-acid) or high cost and short cycle life (silver-zinc), so a hunt was on for alternatives.

Over in Norway, the Norwegian Defence Research Establish- ment (FFI) developed a magnesium/dissolved oxygen “seawa- ter battery” for AUVs that enabled 1,000 miles at 4 knots. But it didn’t have enough power for sensors. So, FFI developed a new concept, an ‘aluminium-hydrogen peroxide’ semi-fuel cell which used hydrogen peroxide with potassium hydroxide

At the time, the offshore industry was exploring deeper wa- in one of C&C’s Hugins ters in excess of 1,500m, then 2,500m. Operators wanted a more accurate survey method than deep tow for these depths.

C&C Technologies, now part of Oceaneering, decided to in- vest in AUVs to do the job. After considering developing its own, the company went out to the market with key attributes: 3,000m depth rating, really accurate navigation and 48-hour run-time, says Jami Cheramie, who was part of C&C from its early days and is now Subsea Robotic Product Manager –

Kongsberg, which commercialized FFI’s aluminium-hydro- gen peroxide semi-fuel cell technology into its Hugin 2, met their requirements (the Hugin 1 had 3 kWh of nickel-cadmi-