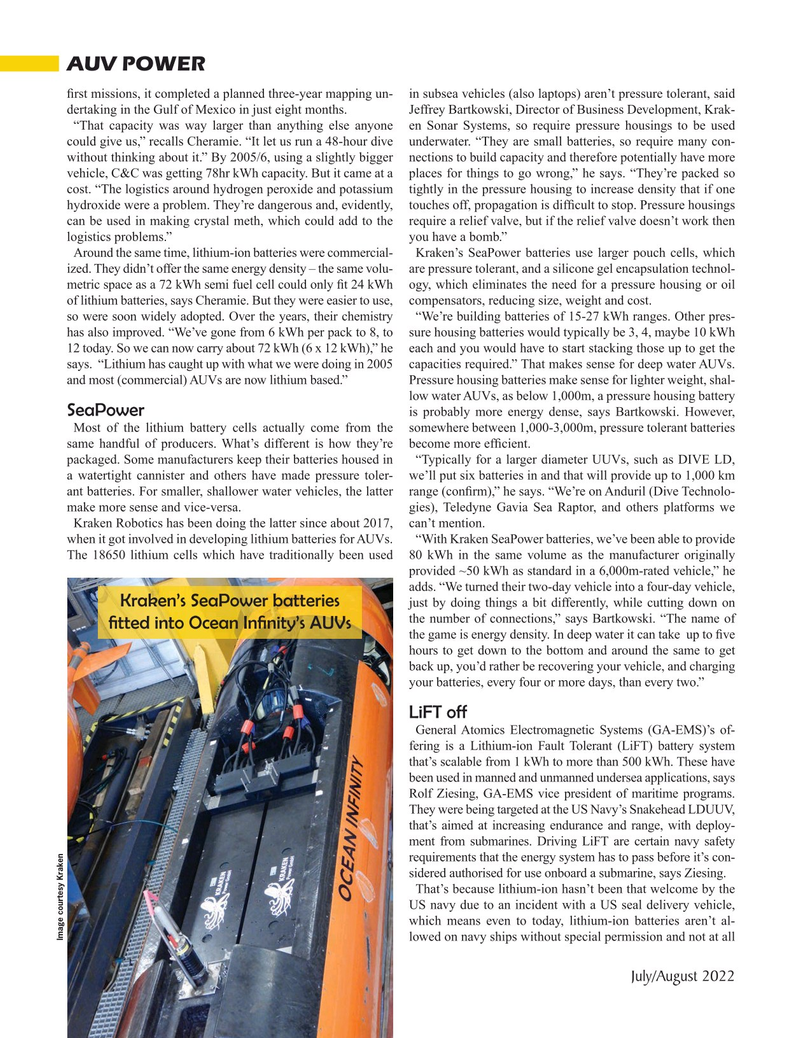 AUV POWER ? rst missions, it completed a planned three-year mapping un- in subsea vehicles (also laptops) aren’t pressure tolerant, said dertaking in the Gulf of Mexico in just eight months. Jeffrey Bartkowski, Director of Business Development, Krak- “That capacity was way larger than anything else anyone en Sonar Systems, so require pressure housings to be used could give us,” recalls Cheramie. “It let us run a 48-hour dive underwater. “They are small batteries, so require many con- without thinking about it.” By 2005/6, using a slightly bigger nections to build capacity and therefore potentially have more vehicle, C&C was getting 78hr kWh capacity. But it came at a places for things to go wrong,” he says. “They’re packed so cost. “The logistics around hydrogen peroxide and potassium tightly in the pressure housing to increase density that if one hydroxide were a problem. They’re dangerous and, evidently, touches off, propagation is dif? cult to stop. Pressure housings can be used in making crystal meth, which could add to the require a relief valve, but if the relief valve doesn’t work then logistics problems.” you have a bomb.”

Around the same time, lithium-ion batteries were commercial- Kraken’s SeaPower batteries use larger pouch cells, which ized. They didn’t offer the same energy density – the same volu- are pressure tolerant, and a silicone gel encapsulation technol- metric space as a 72 kWh semi fuel cell could only ? t 24 kWh ogy, which eliminates the need for a pressure housing or oil of lithium batteries, says Cheramie. But they were easier to use, compensators, reducing size, weight and cost. so were soon widely adopted. Over the years, their chemistry “We’re building batteries of 15-27 kWh ranges. Other pres- has also improved. “We’ve gone from 6 kWh per pack to 8, to sure housing batteries would typically be 3, 4, maybe 10 kWh 12 today. So we can now carry about 72 kWh (6 x 12 kWh),” he each and you would have to start stacking those up to get the says. “Lithium has caught up with what we were doing in 2005 capacities required.” That makes sense for deep water AUVs. and most (commercial) AUVs are now lithium based.” Pressure housing batteries make sense for lighter weight, shal- low water AUVs, as below 1,000m, a pressure housing battery

Most of the lithium battery cells actually come from the somewhere between 1,000-3,000m, pressure tolerant batteries same handful of producers. What’s different is how they’re become more ef? cient. packaged. Some manufacturers keep their batteries housed in “Typically for a larger diameter UUVs, such as DIVE LD, a watertight cannister and others have made pressure toler- we’ll put six batteries in and that will provide up to 1,000 km ant batteries. For smaller, shallower water vehicles, the latter range (con? rm),” he says. “We’re on Anduril (Dive Technolo- make more sense and vice-versa. gies), Teledyne Gavia Sea Raptor, and others platforms we

Kraken Robotics has been doing the latter since about 2017, can’t mention.

when it got involved in developing lithium batteries for AUVs. “With Kraken SeaPower batteries, we’ve been able to provide

The 18650 lithium cells which have traditionally been used 80 kWh in the same volume as the manufacturer originally provided ~50 kWh as standard in a 6,000m-rated vehicle,” he adds. “We turned their two-day vehicle into a four-day vehicle,

Kraken’s SeaPower batteries just by doing things a bit differently, while cutting down on the number of connections,” says Bartkowski. “The name of ? tted into Ocean In? nity’s AUVs the game is energy density. In deep water it can take up to ? ve hours to get down to the bottom and around the same to get back up, you’d rather be recovering your vehicle, and charging your batteries, every four or more days, than every two.”

General Atomics Electromagnetic Systems (GA-EMS)’s of- fering is a Lithium-ion Fault Tolerant (LiFT) battery system that’s scalable from 1 kWh to more than 500 kWh. These have been used in manned and unmanned undersea applications, says

They were being targeted at the US Navy’s Snakehead LDUUV, that’s aimed at increasing endurance and range, with deploy- ment from submarines. Driving LiFT are certain navy safety requirements that the energy system has to pass before it’s con- sidered authorised for use onboard a submarine, says Ziesing.

US navy due to an incident with a US seal delivery vehicle, which means even to today, lithium-ion batteries aren’t al-