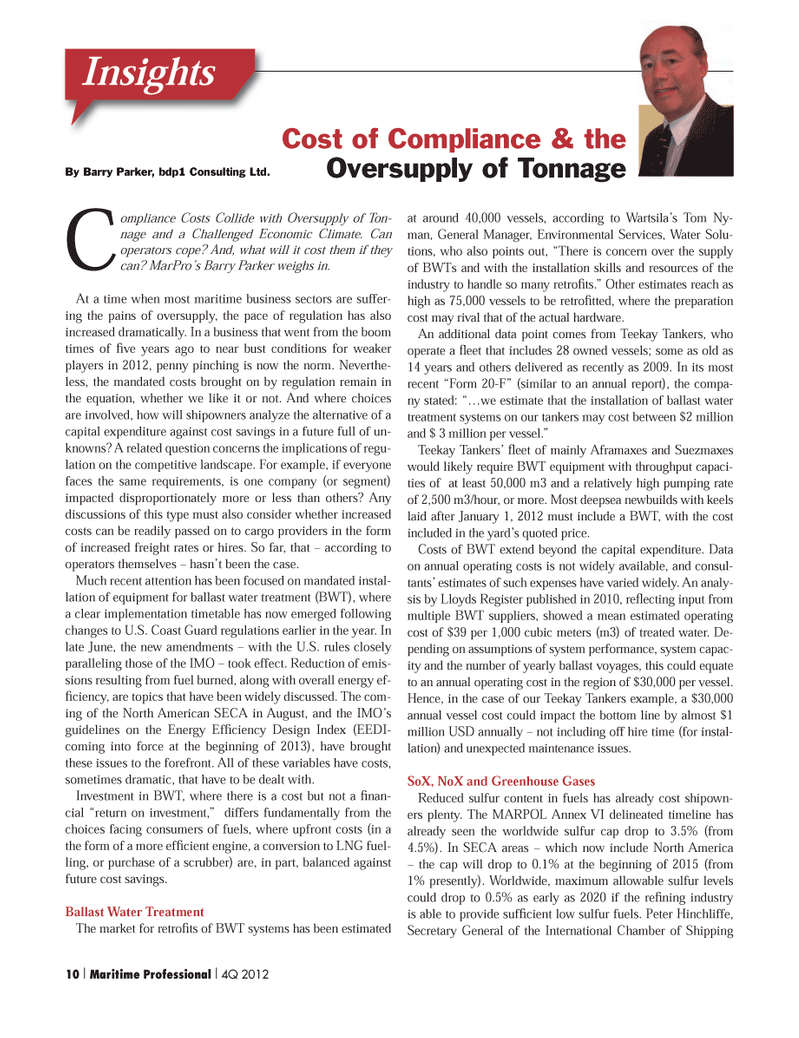 Compliance Costs Collide with Oversupply of Ton- nage and a Challenged Economic Climate. Can operators cope? And, what will it cost them if they can? MarPro?s Barry Parker weighs in. At a time when most maritime business sectors are suffer- ing the pains of oversupply, the pace of regulation has also increased dramatically. In a business that went from the boom times of Þ ve years ago to near bust conditions for weaker players in 2012, penny pinching is now the norm. Neverthe- less, the mandated costs brought on by regulation remain in the equation, whether we like it or not. And where choices are involved, how will shipowners analyze the alternative of a capital expenditure against cost savings in a future full of un- knowns? A related question concerns the implications of regu- lation on the competitive landscape. For example, if everyone faces the same requirements, is one company (or segment) impacted disproportionately more or less than others? Any discussions of this type must also consider whether increased costs can be readily passed on to cargo providers in the form of increased freight rates or hires. So far, that Ð according to operators themselves Ð hasnÕt been the case. Much recent attention has been focused on mandated instal-lation of equipment for ballast water treatment (BWT), where a clear implementation timetable has now emerged following changes to U.S. Coast Guard regulations earlier in the year. In late June, the new amendments Ð with the U.S. rules closely paralleling those of the IMO Ð took effect. Reduction of emis- sions resulting from fuel burned, along with overall energy ef- Þ ciency, are topics that have been widely discussed. The com- ing of the North American SECA in August, and the IMOÕs guidelines on the Energy EfÞ ciency Design Index (EEDI- coming into force at the beginning of 2013), have brought these issues to the forefront. All of these variables have costs, sometimes dramatic, that have to be dealt with. Investment in BWT, where there is a cost but not a Þ nan-cial Òreturn on investment,Ó differs fundamentally from the choices facing consumers of fuels, where upfront costs (in a the form of a more efÞ cient engine, a conversion to LNG fuel- ling, or purchase of a scrubber) are, in part, balanced against future cost savings. Ballast Water Treatment The market for retroÞ ts of BWT systems has been estimated at around 40,000 vessels, according to WartsilaÕs Tom Ny- man, General Manager, Environmental Services, Water Solu- tions, who also points out, ÒThere is concern over the supply of BWTs and with the installation skills and resources of the industry to handle so many retroÞ ts.Ó Other estimates reach as high as 75,000 vessels to be retroÞ tted, where the preparation cost may rival that of the actual hardware. An additional data point comes from Teekay Tankers, who operate a ß eet that includes 28 owned vessels; some as old as 14 years and others delivered as recently as 2009. In its most recent ÒForm 20-FÓ (similar to an annual report), the compa- ny stated: ÒÉwe estimate that the installation of ballast water treatment systems on our tankers may cost between $2 million and $ 3 million per vessel.Ó Teekay TankersÕ ß eet of mainly Aframaxes and Suezmaxes would likely require BWT equipment with throughput capaci- ties of at least 50,000 m3 and a relatively high pumping rate of 2,500 m3/hour, or more. Most deepsea newbuilds with keels laid after January 1, 2012 must include a BWT, with the cost included in the yardÕs quoted price. Costs of BWT extend beyond the capital expenditure. Data on annual operating costs is not widely available, and consul- tantsÕ estimates of such expenses have varied widely. An analy- sis by Lloyds Register published in 2010, reß ecting input from multiple BWT suppliers, showed a mean estimated operating cost of $39 per 1,000 cubic meters (m3) of treated water. De- pending on assumptions of system performance, system capac-ity and the number of yearly ballast voyages, this could equate to an annual operating cost in the region of $30,000 per vessel. Hence, in the case of our Teekay Tankers example, a $30,000 annual vessel cost could impact the bottom line by almost $1 million USD annually Ð not including off hire time (for instal- lation) and unexpected maintenance issues. SoX, NoX and Greenhouse Gases Reduced sulfur content in fuels has already cost shipown- ers plenty. The MARPOL Annex VI delineated timeline has already seen the worldwide sulfur cap drop to 3.5% (from 4.5%). In SECA areas Ð which now include North America Ð the cap will drop to 0.1% at the beginning of 2015 (from 1% presently). Worldwide, maximum allowable sulfur levels could drop to 0.5% as early as 2020 if the reÞ ning industry is able to provide sufÞ cient low sulfur fuels. Peter Hinchliffe, Secretary General of the International Chamber of Shipping Cost of Compliance & theOversupply of Tonnage By Barry Parker, bdp1 Consulting Ltd. Insights10 I Maritime Professional I 4Q 2012MP #4 1-17.indd 10MP #4 1-17.indd 1011/12/2012 11:42:28 AM11/12/2012 11:42:28 AM