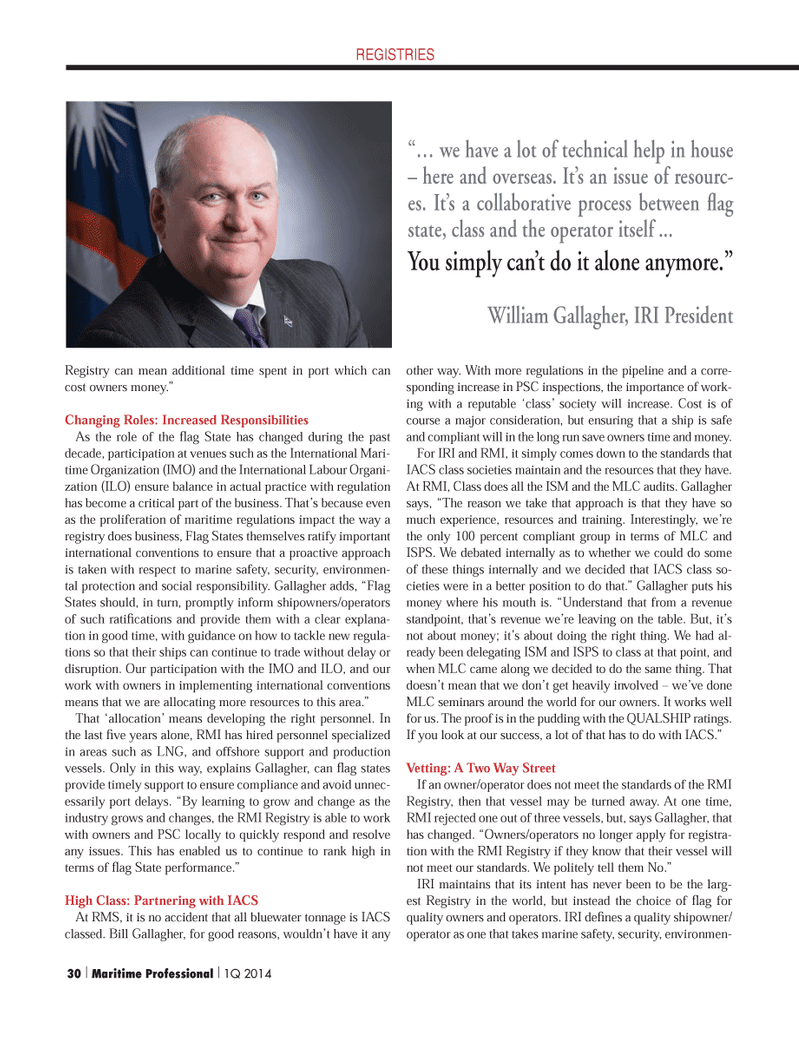 Registry can mean additional time spent in port which can cost owners money.”

As the role of the fl ag State has changed during the past decade, participation at venues such as the International Mari- time Organization (IMO) and the International Labour Organi- zation (ILO) ensure balance in actual practice with regulation has become a critical part of the business. That’s because even as the proliferation of maritime regulations impact the way a registry does business, Flag States themselves ratify important international conventions to ensure that a proactive approach is taken with respect to marine safety, security, environmen- tal protection and social responsibility. Gallagher adds, “Flag

States should, in turn, promptly inform shipowners/operators of such ratifi cations and provide them with a clear explana- tion in good time, with guidance on how to tackle new regula- tions so that their ships can continue to trade without delay or disruption. Our participation with the IMO and ILO, and our work with owners in implementing international conventions means that we are allocating more resources to this area.”

That ‘allocation’ means developing the right personnel. In the last fi ve years alone, RMI has hired personnel specialized in areas such as LNG, and offshore support and production vessels. Only in this way, explains Gallagher, can fl ag states provide timely support to ensure compliance and avoid unnec- essarily port delays. “By learning to grow and change as the industry grows and changes, the RMI Registry is able to work with owners and PSC locally to quickly respond and resolve any issues. This has enabled us to continue to rank high in terms of fl ag State performance.”

At RMS, it is no accident that all bluewater tonnage is IACS classed. Bill Gallagher, for good reasons, wouldn’t have it any other way. With more regulations in the pipeline and a corre- sponding increase in PSC inspections, the importance of work- ing with a reputable ‘class’ society will increase. Cost is of course a major consideration, but ensuring that a ship is safe and compliant will in the long run save owners time and money.

For IRI and RMI, it simply comes down to the standards that

IACS class societies maintain and the resources that they have.

At RMI, Class does all the ISM and the MLC audits. Gallagher says, “The reason we take that approach is that they have so much experience, resources and training. Interestingly, we’re the only 100 percent compliant group in terms of MLC and

ISPS. We debated internally as to whether we could do some of these things internally and we decided that IACS class so- cieties were in a better position to do that.” Gallagher puts his money where his mouth is. “Understand that from a revenue standpoint, that’s revenue we’re leaving on the table. But, it’s not about money; it’s about doing the right thing. We had al- ready been delegating ISM and ISPS to class at that point, and when MLC came along we decided to do the same thing. That doesn’t mean that we don’t get heavily involved – we’ve done

MLC seminars around the world for our owners. It works well for us. The proof is in the pudding with the QUALSHIP ratings.

If you look at our success, a lot of that has to do with IACS.”

Registry, then that vessel may be turned away. At one time,

RMI rejected one out of three vessels, but, says Gallagher, that has changed. “Owners/operators no longer apply for registra- tion with the RMI Registry if they know that their vessel will not meet our standards. We politely tell them No.”

IRI maintains that its intent has never been to be the larg- est Registry in the world, but instead the choice of fl ag for quality owners and operators. IRI defi nes a quality shipowner/ operator as one that takes marine safety, security, environmen- “… we have a lot of technical help in house – here and overseas. It’s an issue of resourc- es. It’s a collaborative process between fl ag state, class and the operator itself ...

You simply can’t do it alone anymore.”