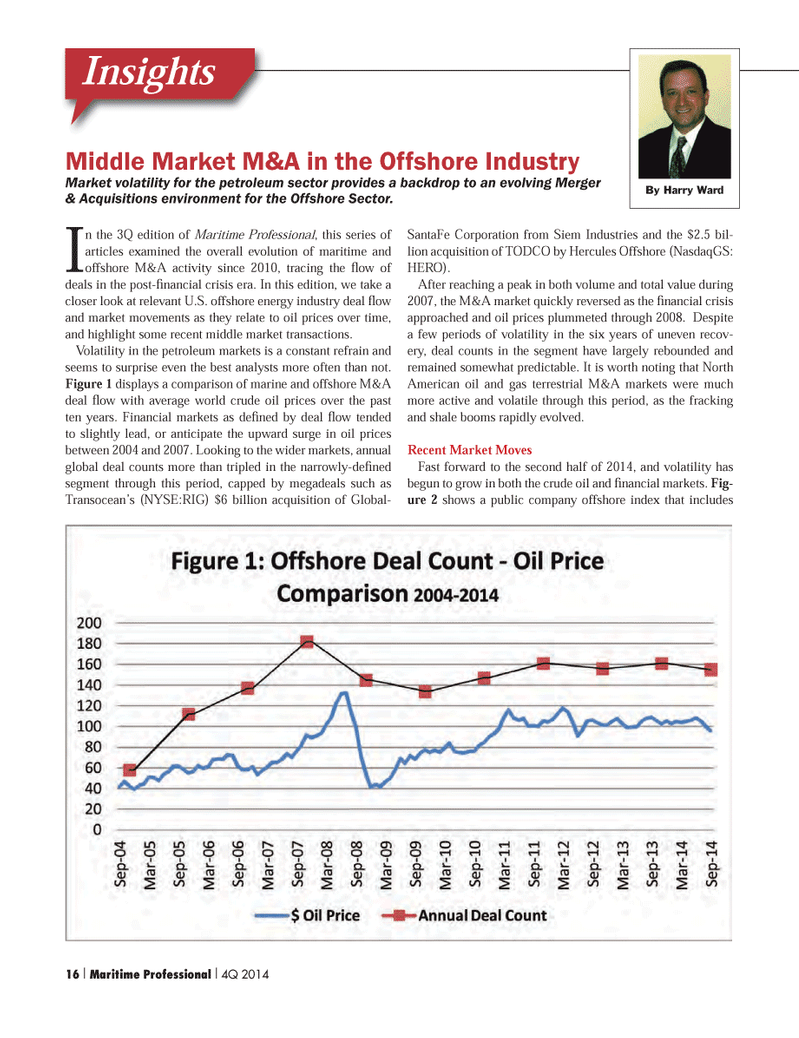 In the 3Q edition of Maritime Professional , this series of articles examined the overall evolution of maritime and offshore M&A activity since 2010, tracing the ß ow of deals in the post-Þ nancial crisis era. In this edition, we take a closer look at relevant U.S. offshore energy industry deal ß ow and market movements as they relate to oil prices over time, and highlight some recent middle market transactions. Volatility in the petroleum markets is a constant refrain and seems to surprise even the best analysts more often than not. Figure 1 displays a comparison of marine and offshore M&A deal ß ow with average world crude oil prices over the past ten years. Financial markets as deÞ ned by deal ß ow tended to slightly lead, or anticipate the upward surge in oil prices between 2004 and 2007. Looking to the wider markets, annual global deal counts more than tripled in the narrowly-deÞ ned segment through this period, capped by megadeals such as TransoceanÕs (NYSE:RIG) $6 billion acquisition of Global- SantaFe Corporation from Siem Industries and the $2.5 bil-lion acquisition of TODCO by Hercules Offshore (NasdaqGS: HERO). After reaching a peak in both volume and total value during 2007, the M&A market quickly reversed as the Þ nancial crisis approached and oil prices plummeted through 2008. Despite a few periods of volatility in the six years of uneven recov- ery, deal counts in the segment have largely rebounded and remained somewhat predictable. It is worth noting that North American oil and gas terrestrial M&A markets were much more active and volatile through this period, as the fracking and shale booms rapidly evolved. Recent Market Moves Fast forward to the second half of 2014, and volatility has begun to grow in both the crude oil and Þ nancial markets. Fig-ure 2 shows a public company offshore index that includes Middle Market M&A in the Offshore Industry Market volatility for the petroleum sector provides a backdrop to an evolving Merger & Acquisitions environment for the Offshore Sector. InsightsBy Harry Ward 16 I Maritime Professional I 4Q 20141-17 Q4 MP2014.indd 161-17 Q4 MP2014.indd 1611/17/2014 2:49:52 PM11/17/2014 2:49:52 PM