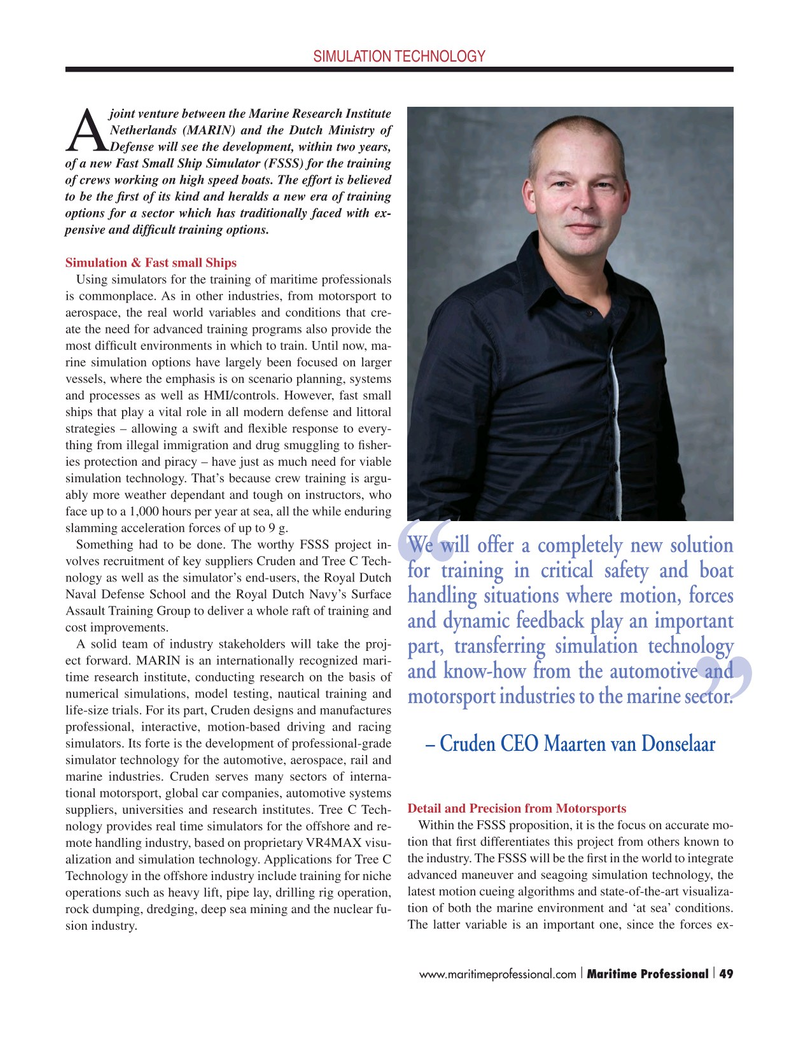 Netherlands (MARIN) and the Dutch Ministry of

A Defense will see the development, within two years, of a new Fast Small Ship Simulator (FSSS) for the training of crews working on high speed boats. The effort is believed to be the ? rst of its kind and heralds a new era of training options for a sector which has traditionally faced with ex- pensive and dif? cult training options.

Using simulators for the training of maritime professionals is commonplace. As in other industries, from motorsport to aerospace, the real world variables and conditions that cre- ate the need for advanced training programs also provide the most dif? cult environments in which to train. Until now, ma- rine simulation options have largely been focused on larger vessels, where the emphasis is on scenario planning, systems and processes as well as HMI/controls. However, fast small ships that play a vital role in all modern defense and littoral strategies – allowing a swift and ? exible response to every- thing from illegal immigration and drug smuggling to ? sher- ies protection and piracy – have just as much need for viable simulation technology. That’s because crew training is argu- ably more weather dependant and tough on instructors, who face up to a 1,000 hours per year at sea, all the while enduring slamming acceleration forces of up to 9 g.

Something had to be done. The worthy FSSS project in-

We will offer a completely new solution volves recruitment of key suppliers Cruden and Tree C Tech- for training in critical safety and boat nology as well as the simulator’s end-users, the Royal Dutch

Assault Training Group to deliver a whole raft of training and and dynamic feedback play an important cost improvements.

A solid team of industry stakeholders will take the proj- part, transferring simulation technology ect forward. MARIN is an internationally recognized mari- and know-how from the automotive and time research institute, conducting research on the basis of numerical simulations, model testing, nautical training and motorsport industries to the marine sector. life-size trials. For its part, Cruden designs and manufactures professional, interactive, motion-based driving and racing ” simulators. Its forte is the development of professional-grade – Cruden CEO Maarten van Donselaar simulator technology for the automotive, aerospace, rail and marine industries. Cruden serves many sectors of interna- tional motorsport, global car companies, automotive systems suppliers, universities and research institutes. Tree C Tech- Detail and Precision from Motorsports nology provides real time simulators for the offshore and re- Within the FSSS proposition, it is the focus on accurate mo- mote handling industry, based on proprietary VR4MAX visu- tion that ? rst differentiates this project from others known to alization and simulation technology. Applications for Tree C the industry. The FSSS will be the ? rst in the world to integrate

Technology in the offshore industry include training for niche advanced maneuver and seagoing simulation technology, the operations such as heavy lift, pipe lay, drilling rig operation, latest motion cueing algorithms and state-of-the-art visualiza- rock dumping, dredging, deep sea mining and the nuclear fu- tion of both the marine environment and ‘at sea’ conditions. sion industry. The latter variable is an important one, since the forces ex- www.maritimeprofessional.com Maritime Professional 49| |