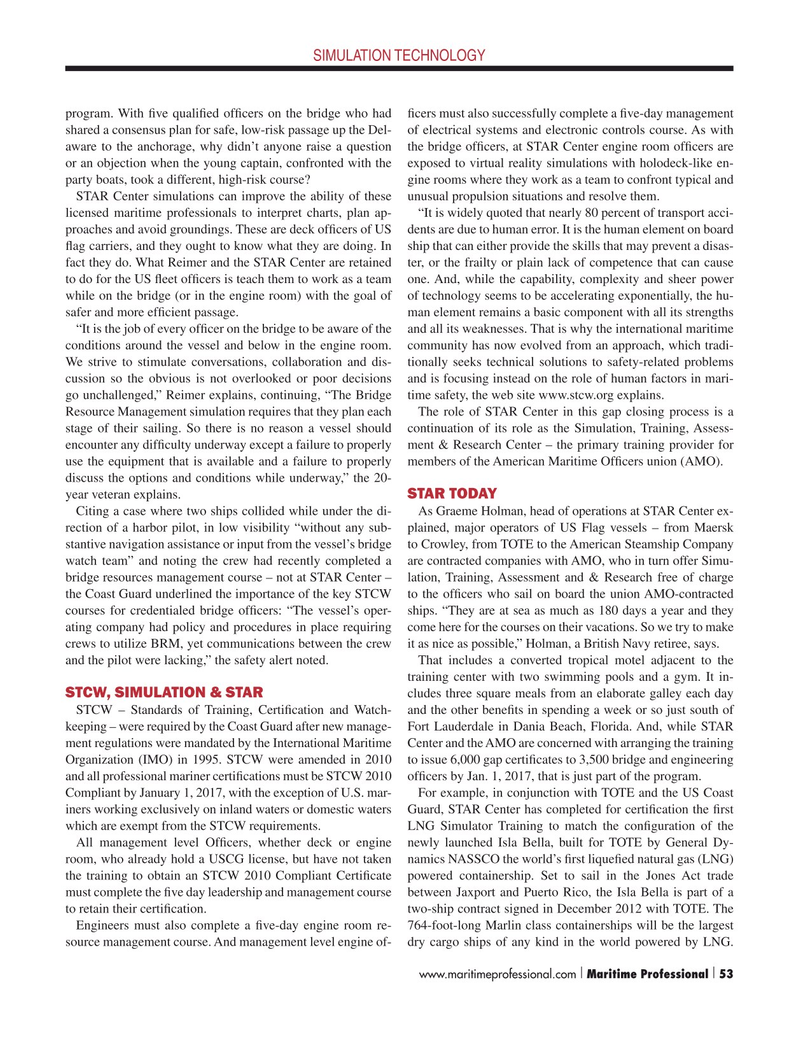 SIMULATION TECHNOLOGY program. With ? ve quali? ed of? cers on the bridge who had ? cers must also successfully complete a ? ve-day management shared a consensus plan for safe, low-risk passage up the Del- of electrical systems and electronic controls course. As with aware to the anchorage, why didn’t anyone raise a question the bridge of? cers, at STAR Center engine room of? cers are or an objection when the young captain, confronted with the exposed to virtual reality simulations with holodeck-like en- party boats, took a different, high-risk course? gine rooms where they work as a team to confront typical and

STAR Center simulations can improve the ability of these unusual propulsion situations and resolve them.

licensed maritime professionals to interpret charts, plan ap- “It is widely quoted that nearly 80 percent of transport acci- proaches and avoid groundings. These are deck of? cers of US dents are due to human error. It is the human element on board ? ag carriers, and they ought to know what they are doing. In ship that can either provide the skills that may prevent a disas- fact they do. What Reimer and the STAR Center are retained ter, or the frailty or plain lack of competence that can cause to do for the US ? eet of? cers is teach them to work as a team one. And, while the capability, complexity and sheer power while on the bridge (or in the engine room) with the goal of of technology seems to be accelerating exponentially, the hu- safer and more ef? cient passage. man element remains a basic component with all its strengths “It is the job of every of? cer on the bridge to be aware of the and all its weaknesses. That is why the international maritime conditions around the vessel and below in the engine room. community has now evolved from an approach, which tradi-

We strive to stimulate conversations, collaboration and dis- tionally seeks technical solutions to safety-related problems cussion so the obvious is not overlooked or poor decisions and is focusing instead on the role of human factors in mari- go unchallenged,” Reimer explains, continuing, “The Bridge time safety, the web site www.stcw.org explains.

Resource Management simulation requires that they plan each The role of STAR Center in this gap closing process is a stage of their sailing. So there is no reason a vessel should continuation of its role as the Simulation, Training, Assess- encounter any dif? culty underway except a failure to properly ment & Research Center – the primary training provider for use the equipment that is available and a failure to properly members of the American Maritime Of? cers union (AMO).

discuss the options and conditions while underway,” the 20-

Citing a case where two ships collided while under the di- As Graeme Holman, head of operations at STAR Center ex- rection of a harbor pilot, in low visibility “without any sub- plained, major operators of US Flag vessels – from Maersk stantive navigation assistance or input from the vessel’s bridge to Crowley, from TOTE to the American Steamship Company watch team” and noting the crew had recently completed a are contracted companies with AMO, who in turn offer Simu- bridge resources management course – not at STAR Center – lation, Training, Assessment and & Research free of charge the Coast Guard underlined the importance of the key STCW to the of? cers who sail on board the union AMO-contracted courses for credentialed bridge of? cers: “The vessel’s oper- ships. “They are at sea as much as 180 days a year and they ating company had policy and procedures in place requiring come here for the courses on their vacations. So we try to make crews to utilize BRM, yet communications between the crew it as nice as possible,” Holman, a British Navy retiree, says.

and the pilot were lacking,” the safety alert noted. That includes a converted tropical motel adjacent to the training center with two swimming pools and a gym. It in-

STCW – Standards of Training, Certi? cation and Watch- and the other bene? ts in spending a week or so just south of keeping – were required by the Coast Guard after new manage- Fort Lauderdale in Dania Beach, Florida. And, while STAR ment regulations were mandated by the International Maritime Center and the AMO are concerned with arranging the training

Compliant by January 1, 2017, with the exception of U.S. mar- For example, in conjunction with TOTE and the US Coast iners working exclusively on inland waters or domestic waters Guard, STAR Center has completed for certi? cation the ? rst which are exempt from the STCW requirements. LNG Simulator Training to match the con? guration of the

All management level Of? cers, whether deck or engine newly launched Isla Bella, built for TOTE by General Dy- room, who already hold a USCG license, but have not taken namics NASSCO the world’s ? rst lique? ed natural gas (LNG) the training to obtain an STCW 2010 Compliant Certi? cate powered containership. Set to sail in the Jones Act trade must complete the ? ve day leadership and management course between Jaxport and Puerto Rico, the Isla Bella is part of a to retain their certi? cation. two-ship contract signed in December 2012 with TOTE. The

Engineers must also complete a ? ve-day engine room re- 764-foot-long Marlin class containerships will be the largest source management course. And management level engine of- dry cargo ships of any kind in the world powered by LNG. www.maritimeprofessional.com Maritime Professional 53| |