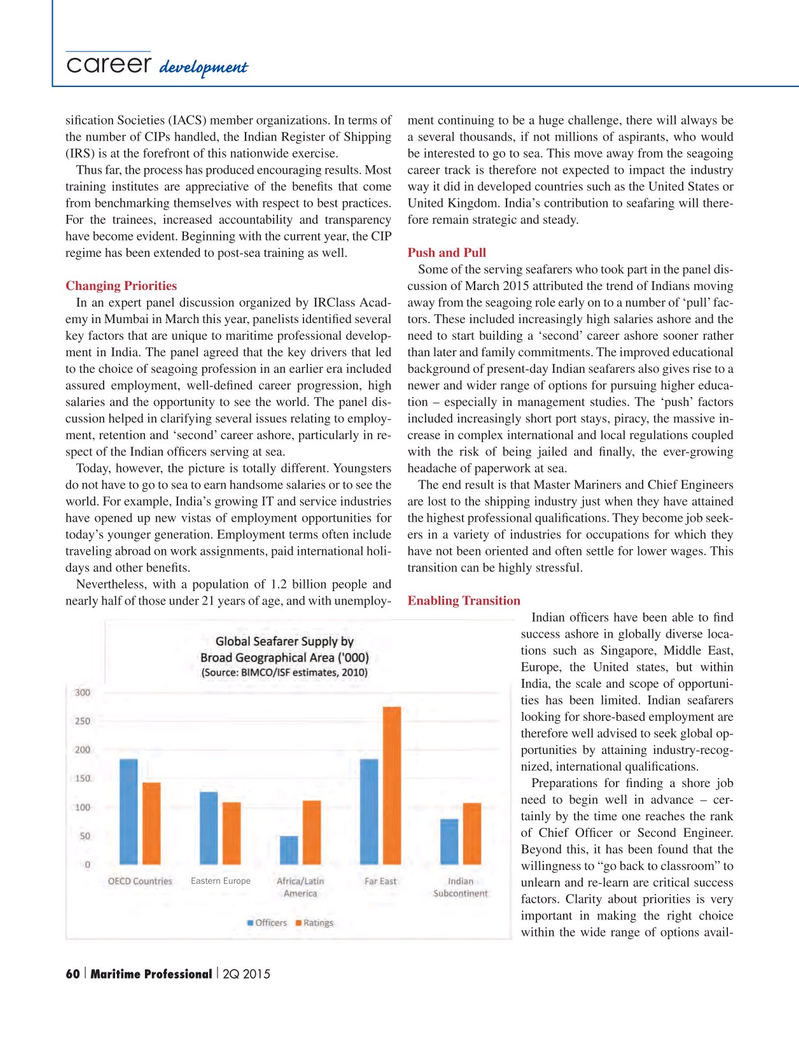 career development si? cation Societies (IACS) member organizations. In terms of ment continuing to be a huge challenge, there will always be the number of CIPs handled, the Indian Register of Shipping a several thousands, if not millions of aspirants, who would (IRS) is at the forefront of this nationwide exercise. be interested to go to sea. This move away from the seagoing

Thus far, the process has produced encouraging results. Most career track is therefore not expected to impact the industry training institutes are appreciative of the bene? ts that come way it did in developed countries such as the United States or from benchmarking themselves with respect to best practices. United Kingdom. India’s contribution to seafaring will there-

For the trainees, increased accountability and transparency fore remain strategic and steady.

have become evident. Beginning with the current year, the CIP regime has been extended to post-sea training as well. Push and Pull Some of the serving seafarers who took part in the panel dis-

In an expert panel discussion organized by IRClass Acad- away from the seagoing role early on to a number of ‘pull’ fac- emy in Mumbai in March this year, panelists identi? ed several tors. These included increasingly high salaries ashore and the key factors that are unique to maritime professional develop- need to start building a ‘second’ career ashore sooner rather ment in India. The panel agreed that the key drivers that led than later and family commitments. The improved educational to the choice of seagoing profession in an earlier era included background of present-day Indian seafarers also gives rise to a assured employment, well-de? ned career progression, high newer and wider range of options for pursuing higher educa- salaries and the opportunity to see the world. The panel dis- tion – especially in management studies. The ‘push’ factors cussion helped in clarifying several issues relating to employ- included increasingly short port stays, piracy, the massive in- ment, retention and ‘second’ career ashore, particularly in re- crease in complex international and local regulations coupled spect of the Indian of? cers serving at sea. with the risk of being jailed and ? nally, the ever-growing

Today, however, the picture is totally different. Youngsters headache of paperwork at sea. do not have to go to sea to earn handsome salaries or to see the The end result is that Master Mariners and Chief Engineers world. For example, India’s growing IT and service industries are lost to the shipping industry just when they have attained have opened up new vistas of employment opportunities for the highest professional quali? cations. They become job seek- today’s younger generation. Employment terms often include ers in a variety of industries for occupations for which they traveling abroad on work assignments, paid international holi- have not been oriented and often settle for lower wages. This days and other bene? ts. transition can be highly stressful.

Nevertheless, with a population of 1.2 billion people and nearly half of those under 21 years of age, and with unemploy- Enabling Transition

Indian of? cers have been able to ? nd success ashore in globally diverse loca- tions such as Singapore, Middle East,

Europe, the United states, but within

Preparations for ? nding a shore job need to begin well in advance – cer- tainly by the time one reaches the rank of Chief Of? cer or Second Engineer.

Beyond this, it has been found that the willingness to “go back to classroom” to

Eastern Europe unlearn and re-learn are critical success factors. Clarity about priorities is very important in making the right choice within the wide range of options avail- 60 Maritime Professional 2Q 2015| |