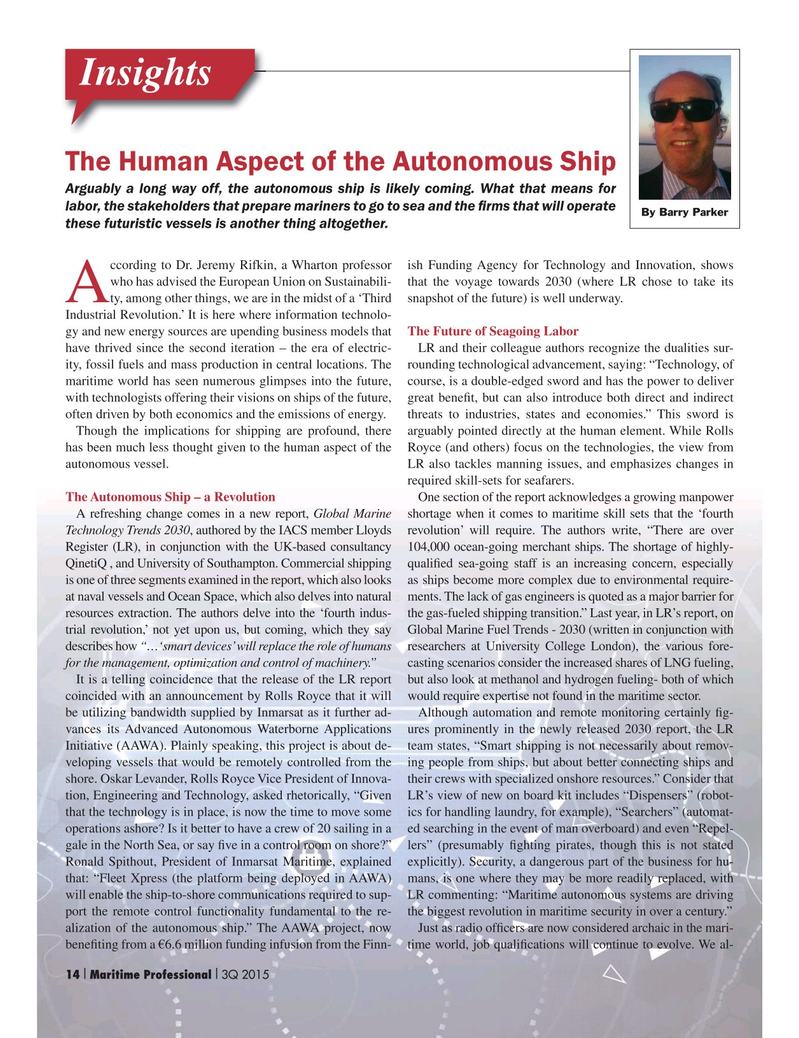 The Human Aspect of the Autonomous Ship

Arguably a long way off, the autonomous ship is likely coming. What that means for labor, the stakeholders that prepare mariners to go to sea and the ? rms that will operate

By Barry Parker these futuristic vessels is another thing altogether.

ccording to Dr. Jeremy Rifkin, a Wharton professor ish Funding Agency for Technology and Innovation, shows who has advised the European Union on Sustainabili- that the voyage towards 2030 (where LR chose to take its

Aty, among other things, we are in the midst of a ‘Third snapshot of the future) is well underway.

Industrial Revolution.’ It is here where information technolo- gy and new energy sources are upending business models that The Future of Seagoing Labor have thrived since the second iteration – the era of electric- LR and their colleague authors recognize the dualities sur- ity, fossil fuels and mass production in central locations. The rounding technological advancement, saying: “Technology, of maritime world has seen numerous glimpses into the future, course, is a double-edged sword and has the power to deliver with technologists offering their visions on ships of the future, great bene? t, but can also introduce both direct and indirect often driven by both economics and the emissions of energy. threats to industries, states and economies.” This sword is

Though the implications for shipping are profound, there arguably pointed directly at the human element. While Rolls has been much less thought given to the human aspect of the Royce (and others) focus on the technologies, the view from autonomous vessel. LR also tackles manning issues, and emphasizes changes in required skill-sets for seafarers.

A refreshing change comes in a new report, Global Marine shortage when it comes to maritime skill sets that the ‘fourth

Technology Trends 2030, authored by the IACS member Lloyds revolution’ will require. The authors write, “There are over

Register (LR), in conjunction with the UK-based consultancy 104,000 ocean-going merchant ships. The shortage of highly-

QinetiQ , and University of Southampton. Commercial shipping quali? ed sea-going staff is an increasing concern, especially is one of three segments examined in the report, which also looks as ships become more complex due to environmental require- at naval vessels and Ocean Space, which also delves into natural ments. The lack of gas engineers is quoted as a major barrier for resources extraction. The authors delve into the ‘fourth indus- the gas-fueled shipping transition.” Last year, in LR’s report, on trial revolution,’ not yet upon us, but coming, which they say Global Marine Fuel Trends - 2030 (written in conjunction with describes how “…‘smart devices’ will replace the role of humans researchers at University College London), the various fore- for the management, optimization and control of machinery.” casting scenarios consider the increased shares of LNG fueling,

It is a telling coincidence that the release of the LR report but also look at methanol and hydrogen fueling- both of which coincided with an announcement by Rolls Royce that it will would require expertise not found in the maritime sector. be utilizing bandwidth supplied by Inmarsat as it further ad- Although automation and remote monitoring certainly ? g- vances its Advanced Autonomous Waterborne Applications ures prominently in the newly released 2030 report, the LR

Initiative (AAWA). Plainly speaking, this project is about de- team states, “Smart shipping is not necessarily about remov- veloping vessels that would be remotely controlled from the ing people from ships, but about better connecting ships and shore. Oskar Levander, Rolls Royce Vice President of Innova- their crews with specialized onshore resources.” Consider that tion, Engineering and Technology, asked rhetorically, “Given LR’s view of new on board kit includes “Dispensers” (robot- that the technology is in place, is now the time to move some ics for handling laundry, for example), “Searchers” (automat- operations ashore? Is it better to have a crew of 20 sailing in a ed searching in the event of man overboard) and even “Repel- gale in the North Sea, or say ? ve in a control room on shore?” lers” (presumably ? ghting pirates, though this is not stated

Ronald Spithout, President of Inmarsat Maritime, explained explicitly). Security, a dangerous part of the business for hu- that: “Fleet Xpress (the platform being deployed in AAWA) mans, is one where they may be more readily replaced, with will enable the ship-to-shore communications required to sup- LR commenting: “Maritime autonomous systems are driving port the remote control functionality fundamental to the re- the biggest revolution in maritime security in over a century.” alization of the autonomous ship.” The AAWA project, now Just as radio of? cers are now considered archaic in the mari- bene? ting from a €6.6 million funding infusion from the Finn- time world, job quali? cations will continue to evolve. We al- 14 Maritime Professional 3Q 2015I I 1-17 Q3 MP2015.indd 14 9/18/2015 3:14:04 PM