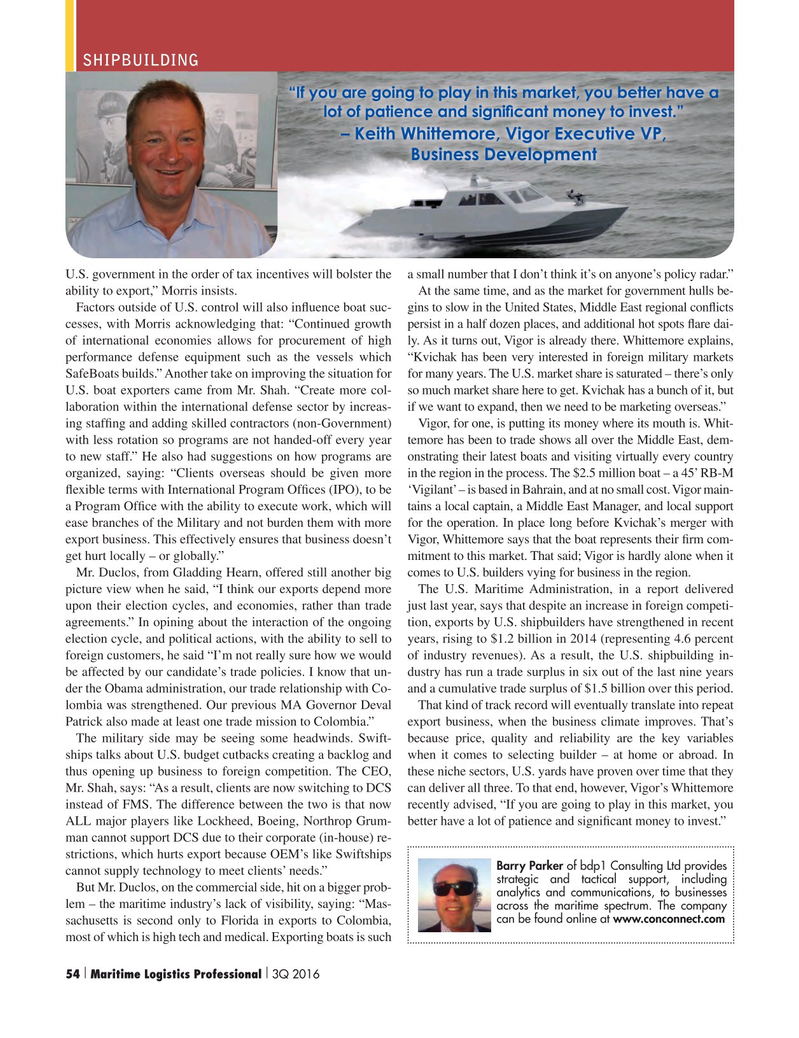 SHIPBUILDING “If you are going to play in this market, you better have a lot of patience and signi? cant money to invest.” – Keith Whittemore, Vigor Executive VP,

U.S. government in the order of tax incentives will bolster the a small number that I don’t think it’s on anyone’s policy radar.” ability to export,” Morris insists. At the same time, and as the market for government hulls be-

Factors outside of U.S. control will also in? uence boat suc- gins to slow in the United States, Middle East regional con? icts cesses, with Morris acknowledging that: “Continued growth persist in a half dozen places, and additional hot spots ? are dai- of international economies allows for procurement of high ly. As it turns out, Vigor is already there. Whittemore explains, performance defense equipment such as the vessels which “Kvichak has been very interested in foreign military markets

SafeBoats builds.” Another take on improving the situation for for many years. The U.S. market share is saturated – there’s only

U.S. boat exporters came from Mr. Shah. “Create more col- so much market share here to get. Kvichak has a bunch of it, but laboration within the international defense sector by increas- if we want to expand, then we need to be marketing overseas.” ing staf? ng and adding skilled contractors (non-Government) Vigor, for one, is putting its money where its mouth is. Whit- with less rotation so programs are not handed-off every year temore has been to trade shows all over the Middle East, dem- to new staff.” He also had suggestions on how programs are onstrating their latest boats and visiting virtually every country organized, saying: “Clients overseas should be given more in the region in the process. The $2.5 million boat – a 45’ RB-M ? exible terms with International Program Of? ces (IPO), to be ‘Vigilant’ – is based in Bahrain, and at no small cost. Vigor main- a Program Of? ce with the ability to execute work, which will tains a local captain, a Middle East Manager, and local support ease branches of the Military and not burden them with more for the operation. In place long before Kvichak’s merger with export business. This effectively ensures that business doesn’t Vigor, Whittemore says that the boat represents their ? rm com- get hurt locally – or globally.” mitment to this market. That said; Vigor is hardly alone when it

Mr. Duclos, from Gladding Hearn, offered still another big comes to U.S. builders vying for business in the region.

picture view when he said, “I think our exports depend more The U.S. Maritime Administration, in a report delivered upon their election cycles, and economies, rather than trade just last year, says that despite an increase in foreign competi- agreements.” In opining about the interaction of the ongoing tion, exports by U.S. shipbuilders have strengthened in recent election cycle, and political actions, with the ability to sell to years, rising to $1.2 billion in 2014 (representing 4.6 percent foreign customers, he said “I’m not really sure how we would of industry revenues). As a result, the U.S. shipbuilding in- be affected by our candidate’s trade policies. I know that un- dustry has run a trade surplus in six out of the last nine years der the Obama administration, our trade relationship with Co- and a cumulative trade surplus of $1.5 billion over this period.

lombia was strengthened. Our previous MA Governor Deval That kind of track record will eventually translate into repeat

Patrick also made at least one trade mission to Colombia.” export business, when the business climate improves. That’s

The military side may be seeing some headwinds. Swift- because price, quality and reliability are the key variables ships talks about U.S. budget cutbacks creating a backlog and when it comes to selecting builder – at home or abroad. In thus opening up business to foreign competition. The CEO, these niche sectors, U.S. yards have proven over time that they

Mr. Shah, says: “As a result, clients are now switching to DCS can deliver all three. To that end, however, Vigor’s Whittemore instead of FMS. The difference between the two is that now recently advised, “If you are going to play in this market, you

ALL major players like Lockheed, Boeing, Northrop Grum- better have a lot of patience and signi? cant money to invest.” man cannot support DCS due to their corporate (in-house) re- strictions, which hurts export because OEM’s like Swiftships

But Mr. Duclos, on the commercial side, hit on a bigger prob- analytics and communications, to businesses lem – the maritime industry’s lack of visibility, saying: “Mas- across the maritime spectrum. The company can be found online at www.conconnect.com sachusetts is second only to Florida in exports to Colombia, most of which is high tech and medical. Exporting boats is such | | 54 Maritime Logistics Professional 3Q 2016 50-63 Q3 MP2016.indd 54 8/17/2016 10:21:27 AM