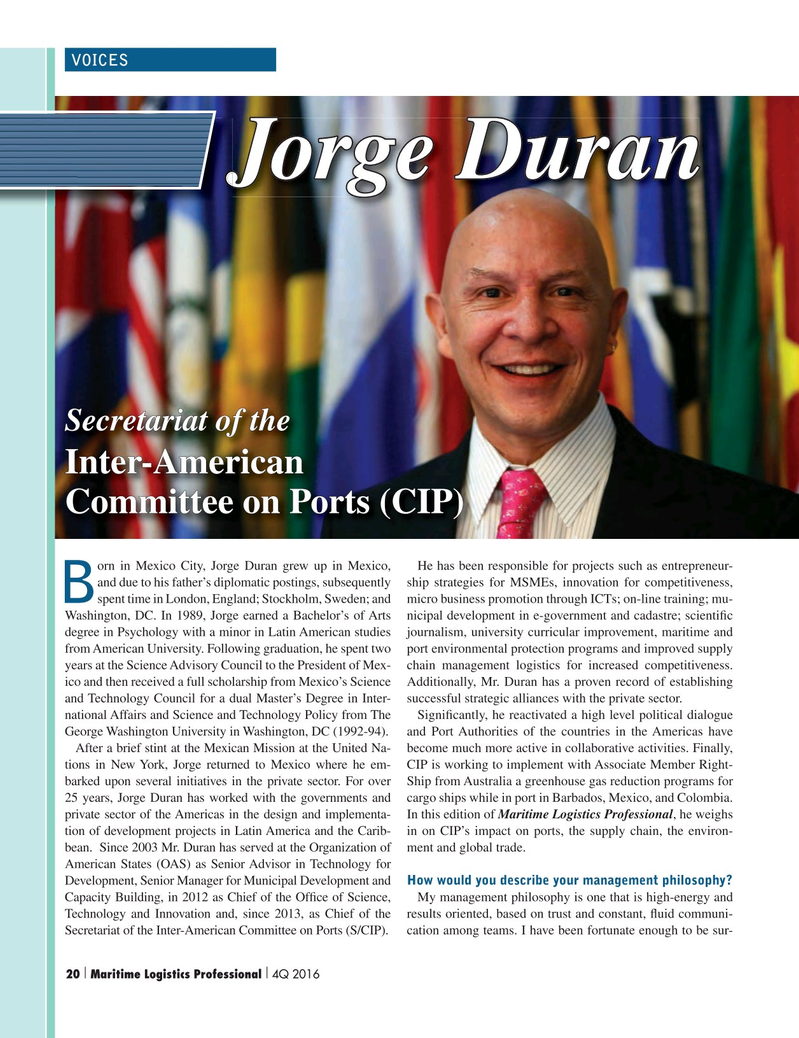 Committee on Ports (CIP) orn in Mexico City, Jorge Duran grew up in Mexico, He has been responsible for projects such as entrepreneur- and due to his father’s diplomatic postings, subsequently ship strategies for MSMEs, innovation for competitiveness,

Washington, DC. In 1989, Jorge earned a Bachelor’s of Arts nicipal development in e-government and cadastre; scienti? c degree in Psychology with a minor in Latin American studies journalism, university curricular improvement, maritime and from American University. Following graduation, he spent two port environmental protection programs and improved supply years at the Science Advisory Council to the President of Mex- chain management logistics for increased competitiveness. ico and then received a full scholarship from Mexico’s Science Additionally, Mr. Duran has a proven record of establishing and Technology Council for a dual Master’s Degree in Inter- successful strategic alliances with the private sector.

national Affairs and Science and Technology Policy from The Signi? cantly, he reactivated a high level political dialogue

George Washington University in Washington, DC (1992-94). and Port Authorities of the countries in the Americas have

After a brief stint at the Mexican Mission at the United Na- become much more active in collaborative activities. Finally, tions in New York, Jorge returned to Mexico where he em- CIP is working to implement with Associate Member Right- barked upon several initiatives in the private sector. For over Ship from Australia a greenhouse gas reduction programs for 25 years, Jorge Duran has worked with the governments and cargo ships while in port in Barbados, Mexico, and Colombia. private sector of the Americas in the design and implementa- In this edition of Maritime Logistics Professional, he weighs tion of development projects in Latin America and the Carib- in on CIP’s impact on ports, the supply chain, the environ- bean. Since 2003 Mr. Duran has served at the Organization of ment and global trade.

American States (OAS) as Senior Advisor in Technology for

Development, Senior Manager for Municipal Development and How would you describe your management philosophy?

Capacity Building, in 2012 as Chief of the Of? ce of Science, My management philosophy is one that is high-energy and

Technology and Innovation and, since 2013, as Chief of the results oriented, based on trust and constant, ? uid communi-