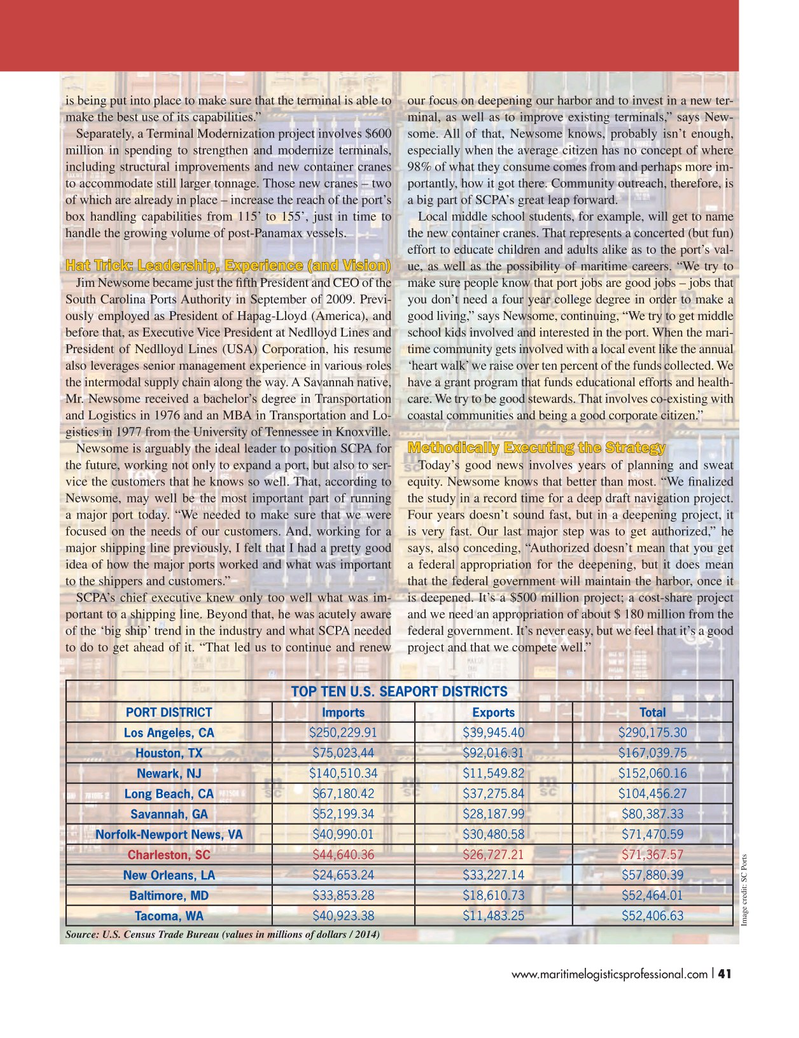 is being put into place to make sure that the terminal is able to our focus on deepening our harbor and to invest in a new ter- make the best use of its capabilities.” minal, as well as to improve existing terminals,” says New-

Separately, a Terminal Modernization project involves $600 some. All of that, Newsome knows, probably isn’t enough, million in spending to strengthen and modernize terminals, especially when the average citizen has no concept of where including structural improvements and new container cranes 98% of what they consume comes from and perhaps more im- to accommodate still larger tonnage. Those new cranes – two portantly, how it got there. Community outreach, therefore, is of which are already in place – increase the reach of the port’s a big part of SCPA’s great leap forward.

box handling capabilities from 115’ to 155’, just in time to Local middle school students, for example, will get to name handle the growing volume of post-Panamax vessels. the new container cranes. That represents a concerted (but fun) effort to educate children and adults alike as to the port’s val-

Hat Trick: Leadership, Experience (and Vision) ue, as well as the possibility of maritime careers. “We try to

Jim Newsome became just the ? fth President and CEO of the make sure people know that port jobs are good jobs – jobs that

South Carolina Ports Authority in September of 2009. Previ- you don’t need a four year college degree in order to make a ously employed as President of Hapag-Lloyd (America), and good living,” says Newsome, continuing, “We try to get middle before that, as Executive Vice President at Nedlloyd Lines and school kids involved and interested in the port. When the mari-

President of Nedlloyd Lines (USA) Corporation, his resume time community gets involved with a local event like the annual also leverages senior management experience in various roles ‘heart walk’ we raise over ten percent of the funds collected. We the intermodal supply chain along the way. A Savannah native, have a grant program that funds educational efforts and health-

Newsome is arguably the ideal leader to position SCPA for Methodically Executing the Strategy the future, working not only to expand a port, but also to ser- Today’s good news involves years of planning and sweat vice the customers that he knows so well. That, according to equity. Newsome knows that better than most. “We ? nalized

Newsome, may well be the most important part of running the study in a record time for a deep draft navigation project. a major port today. “We needed to make sure that we were Four years doesn’t sound fast, but in a deepening project, it focused on the needs of our customers. And, working for a is very fast. Our last major step was to get authorized,” he major shipping line previously, I felt that I had a pretty good says, also conceding, “Authorized doesn’t mean that you get idea of how the major ports worked and what was important a federal appropriation for the deepening, but it does mean to the shippers and customers.” that the federal government will maintain the harbor, once it

SCPA’s chief executive knew only too well what was im- is deepened. It’s a $500 million project; a cost-share project portant to a shipping line. Beyond that, he was acutely aware and we need an appropriation of about $ 180 million from the of the ‘big ship’ trend in the industry and what SCPA needed federal government. It’s never easy, but we feel that it’s a good to do to get ahead of it. “That led us to continue and renew project and that we compete well.”