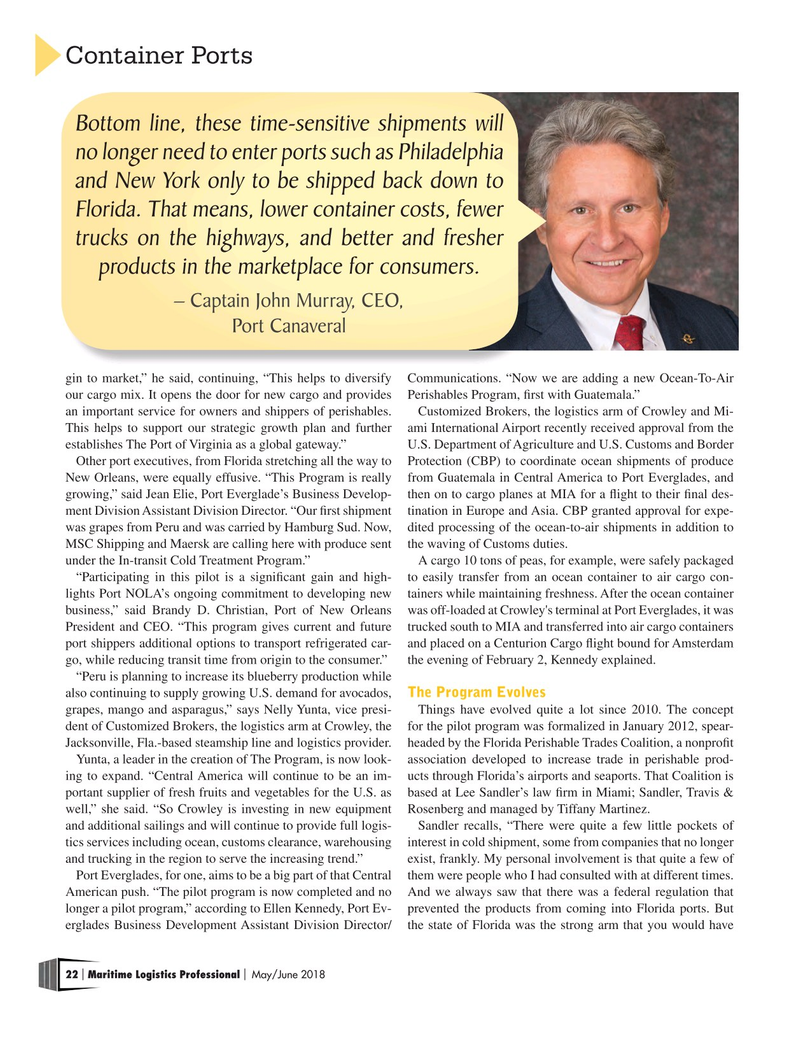 Bottom line, these time-sensitive shipments will no longer need to enter ports such as Philadelphia and New York only to be shipped back down to

Florida. That means, lower container costs, fewer trucks on the highways, and better and fresher products in the marketplace for consumers. – Captain John Murray, CEO,

Port Canaveral gin to market,” he said, continuing, “This helps to diversify Communications. “Now we are adding a new Ocean-To-Air our cargo mix. It opens the door for new cargo and provides Perishables Program, frst with Guatemala.” an important service for owners and shippers of perishables. Customized Brokers, the logistics arm of Crowley and Mi-

This helps to support our strategic growth plan and further ami International Airport recently received approval from the establishes The Port of Virginia as a global gateway.” U.S. Department of Agriculture and U.S. Customs and Border

Other port executives, from Florida stretching all the way to Protection (CBP) to coordinate ocean shipments of produce

New Orleans, were equally effusive. “This Program is really from Guatemala in Central America to Port Everglades, and growing,” said Jean Elie, Port Everglade’s Business Develop- then on to cargo planes at MIA for a fight to their fnal des- ment Division Assistant Division Director. “Our frst shipment tination in Europe and Asia. CBP granted approval for expe- was grapes from Peru and was carried by Hamburg Sud. Now, dited processing of the ocean-to-air shipments in addition to

MSC Shipping and Maersk are calling here with produce sent the waving of Customs duties. under the In-transit Cold Treatment Program.” A cargo 10 tons of peas, for example, were safely packaged “Participating in this pilot is a signifcant gain and high- to easily transfer from an ocean container to air cargo con- lights Port NOLA’s ongoing commitment to developing new tainers while maintaining freshness. After the ocean container business,” said Brandy D. Christian, Port of New Orleans was off-loaded at Crowley's terminal at Port Everglades, it was

President and CEO. “This program gives current and future trucked south to MIA and transferred into air cargo containers port shippers additional options to transport refrigerated car- and placed on a Centurion Cargo fight bound for Amsterdam go, while reducing transit time from origin to the consumer.” the evening of February 2, Kennedy explained. “Peru is planning to increase its blueberry production while also continuing to supply growing U.S. demand for avocados, The Program Evolves grapes, mango and asparagus,” says Nelly Yunta, vice presi- Things have evolved quite a lot since 2010. The concept dent of Customized Brokers, the logistics arm at Crowley, the for the pilot program was formalized in January 2012, spear-

Yunta, a leader in the creation of The Program, is now look- association developed to increase trade in perishable prod- ing to expand. “Central America will continue to be an im- ucts through Florida’s airports and seaports. That Coalition is portant supplier of fresh fruits and vegetables for the U.S. as based at Lee Sandler’s law frm in Miami; Sandler, Travis & well,” she said. “So Crowley is investing in new equipment Rosenberg and managed by Tiffany Martinez.

and additional sailings and will continue to provide full logis- Sandler recalls, “There were quite a few little pockets of tics services including ocean, customs clearance, warehousing interest in cold shipment, some from companies that no longer and trucking in the region to serve the increasing trend.” exist, frankly. My personal involvement is that quite a few of

Port Everglades, for one, aims to be a big part of that Central them were people who I had consulted with at different times.

American push. “The pilot program is now completed and no And we always saw that there was a federal regulation that longer a pilot program,” according to Ellen Kennedy, Port Ev- prevented the products from coming into Florida ports. But erglades Business Development Assistant Division Director/ the state of Florida was the strong arm that you would have 22 Maritime Logistics Professional May/June 2018 | |