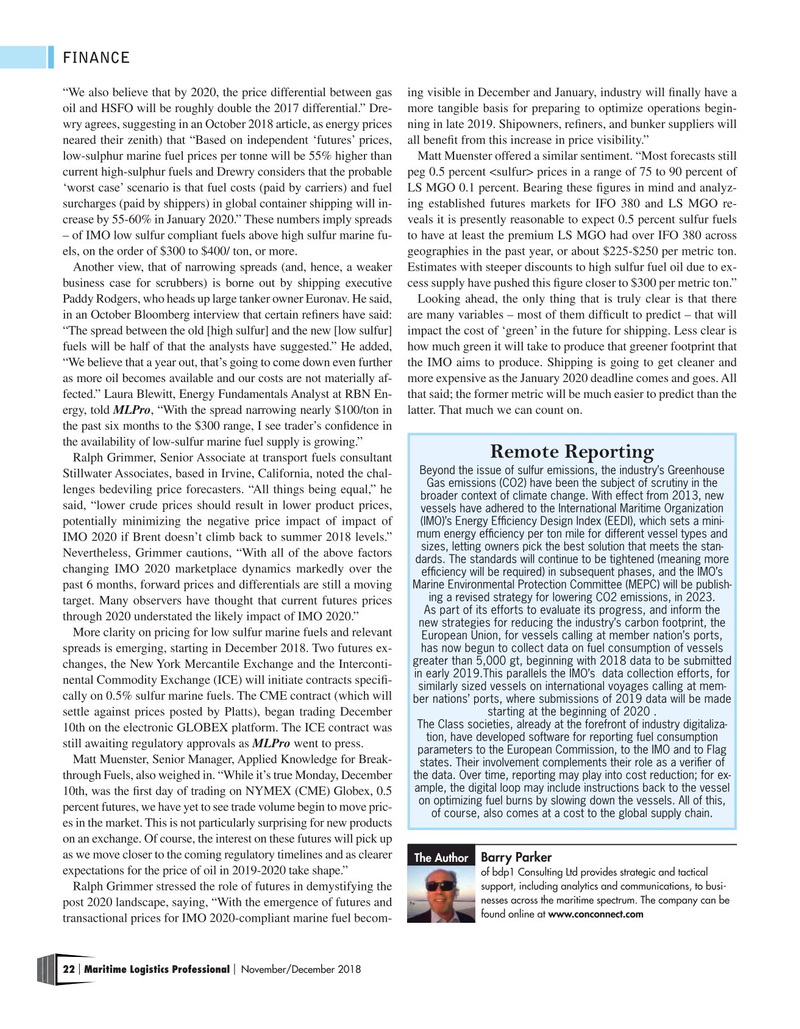 FINANCE “We also believe that by 2020, the price differential between gas ing visible in December and January, industry will fnally have a oil and HSFO will be roughly double the 2017 differential.” Dre- more tangible basis for preparing to optimize operations begin- wry agrees, suggesting in an October 2018 article, as energy prices ning in late 2019. Shipowners, refners, and bunker suppliers will neared their zenith) that “Based on independent ‘futures’ prices, all beneft from this increase in price visibility.” low-sulphur marine fuel prices per tonne will be 55% higher than Matt Muenster offered a similar sentiment. “Most forecasts still current high-sulphur fuels and Drewry considers that the probable peg 0.5 percent

Another view, that of narrowing spreads (and, hence, a weaker Estimates with steeper discounts to high sulfur fuel oil due to ex- business case for scrubbers) is borne out by shipping executive cess supply have pushed this fgure closer to $300 per metric ton.”

Paddy Rodgers, who heads up large tanker owner Euronav. He said, Looking ahead, the only thing that is truly clear is that there in an October Bloomberg interview that certain refners have said: are many variables – most of them diffcult to predict – that will “The spread between the old [high sulfur] and the new [low sulfur] impact the cost of ‘green’ in the future for shipping. Less clear is fuels will be half of that the analysts have suggested.” He added, how much green it will take to produce that greener footprint that “We believe that a year out, that’s going to come down even further the IMO aims to produce. Shipping is going to get cleaner and as more oil becomes available and our costs are not materially af- more expensive as the January 2020 deadline comes and goes. All fected.” Laura Blewitt, Energy Fundamentals Analyst at RBN En- that said; the former metric will be much easier to predict than the ergy, told MLPro, “With the spread narrowing nearly $100/ton in latter. That much we can count on.

the past six months to the $300 range, I see trader’s confdence in the availability of low-sulfur marine fuel supply is growing.”

Beyond the issue of sulfur emissions, the industry’s Greenhouse

Stillwater Associates, based in Irvine, California, noted the chal-

Gas emissions (CO2) have been the subject of scrutiny in the lenges bedeviling price forecasters. “All things being equal,” he broader context of climate change. With effect from 2013, new said, “lower crude prices should result in lower product prices, vessels have adhered to the International Maritime Organization (IMO)’s Energy Effciency Design Index (EEDI), which sets a mini- potentially minimizing the negative price impact of impact of mum energy effciency per ton mile for different vessel types and

IMO 2020 if Brent doesn’t climb back to summer 2018 levels.” sizes, letting owners pick the best solution that meets the stan-

Nevertheless, Grimmer cautions, “With all of the above factors dards. The standards will continue to be tightened (meaning more changing IMO 2020 marketplace dynamics markedly over the effciency will be required) in subsequent phases, and the IMO’s

Marine Environmental Protection Committee (MEPC) will be publish- past 6 months, forward prices and differentials are still a moving ing a revised strategy for lowering CO2 emissions, in 2023. target. Many observers have thought that current futures prices

As part of its efforts to evaluate its progress, and inform the through 2020 understated the likely impact of IMO 2020.” new strategies for reducing the industry’s carbon footprint, the

European Union, for vessels calling at member nation’s ports, has now begun to collect data on fuel consumption of vessels spreads is emerging, starting in December 2018. Two futures ex- greater than 5,000 gt, beginning with 2018 data to be submitted changes, the New York Mercantile Exchange and the Interconti- in early 2019.This parallels the IMO’s data collection efforts, for nental Commodity Exchange (ICE) will initiate contracts specif- similarly sized vessels on international voyages calling at mem- cally on 0.5% sulfur marine fuels. The CME contract (which will ber nations’ ports, where submissions of 2019 data will be made starting at the beginning of 2020 . settle against prices posted by Platts), began trading December

The Class societies, already at the forefront of industry digitaliza- 10th on the electronic GLOBEX platform. The ICE contract was tion, have developed software for reporting fuel consumption still awaiting regulatory approvals as MLPro went to press.

parameters to the European Commission, to the IMO and to Flag

Matt Muenster, Senior Manager, Applied Knowledge for Break- states. Their involvement complements their role as a verifer of the data. Over time, reporting may play into cost reduction; for ex- through Fuels, also weighed in. “While it’s true Monday, December ample, the digital loop may include instructions back to the vessel 10th, was the frst day of trading on NYMEX (CME) Globex, 0.5 on optimizing fuel burns by slowing down the vessels. All of this, percent futures, we have yet to see trade volume begin to move pric- of course, also comes at a cost to the global supply chain.

es in the market. This is not particularly surprising for new products on an exchange. Of course, the interest on these futures will pick up as we move closer to the coming regulatory timelines and as clearer

The Author expectations for the price of oil in 2019-2020 take shape.” of bdp1 Consulting Ltd provides strategic and tactical support, including analytics and communications, to busi-

Ralph Grimmer stressed the role of futures in demystifying the nesses across the maritime spectrum. The company can be post 2020 landscape, saying, “With the emergence of futures and found online at www.conconnect.com transactional prices for IMO 2020-compliant marine fuel becom- 22 Maritime Logistics Professional November/December 2018 | |