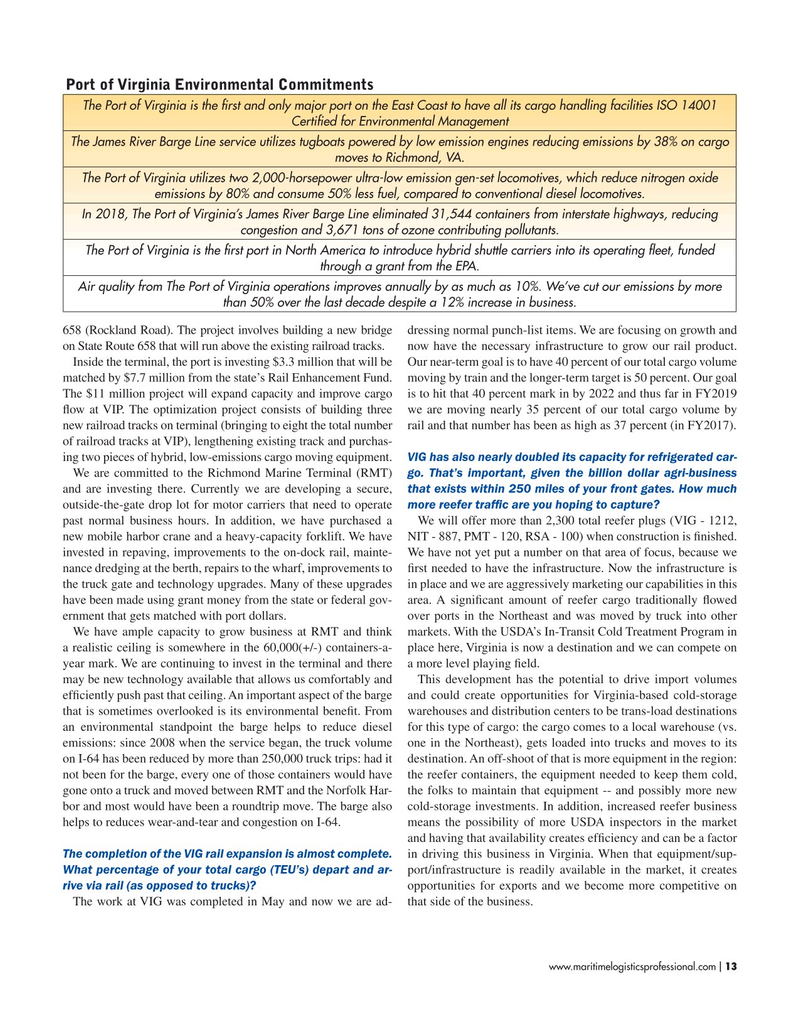 The Port of Virginia is the ?rst and only major port on the East Coast to have all its cargo handling facilities ISO 14001

The Port of Virginia is the ?rst port in North America to introduce hybrid shuttle carriers into its operating ?eet, funded through a grant from the EPA.

Air quality from The Port of Virginia operations improves annually by as much as 10%. We’ve cut our emissions by more than 50% over the last decade despite a 12% increase in business.

658 (Rockland Road). The project involves building a new bridge dressing normal punch-list items. We are focusing on growth and on State Route 658 that will run above the existing railroad tracks. now have the necessary infrastructure to grow our rail product.

Inside the terminal, the port is investing $3.3 million that will be Our near-term goal is to have 40 percent of our total cargo volume matched by $7.7 million from the state’s Rail Enhancement Fund. moving by train and the longer-term target is 50 percent. Our goal

The $11 million project will expand capacity and improve cargo is to hit that 40 percent mark in by 2022 and thus far in FY2019 ?ow at VIP. The optimization project consists of building three we are moving nearly 35 percent of our total cargo volume by new railroad tracks on terminal (bringing to eight the total number rail and that number has been as high as 37 percent (in FY2017).

We are committed to the Richmond Marine Terminal (RMT) go. That’s important, given the billion dollar agri-business and are investing there. Currently we are developing a secure, that exists within 250 miles of your front gates. How much outside-the-gate drop lot for motor carriers that need to operate PRUHUHHIHUWUDIÀFDUH\RXKRSLQJWRFDSWXUH" past normal business hours. In addition, we have purchased a We will offer more than 2,300 total reefer plugs (VIG - 1212, new mobile harbor crane and a heavy-capacity forklift. We have NIT - 887, PMT - 120, RSA - 100) when construction is ?nished. invested in repaving, improvements to the on-dock rail, mainte- We have not yet put a number on that area of focus, because we nance dredging at the berth, repairs to the wharf, improvements to ?rst needed to have the infrastructure. Now the infrastructure is the truck gate and technology upgrades. Many of these upgrades in place and we are aggressively marketing our capabilities in this have been made using grant money from the state or federal gov- area. A signi?cant amount of reefer cargo traditionally ?owed ernment that gets matched with port dollars. over ports in the Northeast and was moved by truck into other

We have ample capacity to grow business at RMT and think markets. With the USDA’s In-Transit Cold Treatment Program in a realistic ceiling is somewhere in the 60,000(+/-) containers-a- place here, Virginia is now a destination and we can compete on year mark. We are continuing to invest in the terminal and there a more level playing ?eld.

may be new technology available that allows us comfortably and This development has the potential to drive import volumes ef?ciently push past that ceiling. An important aspect of the barge and could create opportunities for Virginia-based cold-storage that is sometimes overlooked is its environmental bene?t. From warehouses and distribution centers to be trans-load destinations an environmental standpoint the barge helps to reduce diesel for this type of cargo: the cargo comes to a local warehouse (vs. emissions: since 2008 when the service began, the truck volume one in the Northeast), gets loaded into trucks and moves to its on I-64 has been reduced by more than 250,000 truck trips: had it destination. An off-shoot of that is more equipment in the region: not been for the barge, every one of those containers would have the reefer containers, the equipment needed to keep them cold, gone onto a truck and moved between RMT and the Norfolk Har- the folks to maintain that equipment -- and possibly more new bor and most would have been a roundtrip move. The barge also cold-storage investments. In addition, increased reefer business helps to reduces wear-and-tear and congestion on I-64. means the possibility of more USDA inspectors in the market and having that availability creates ef?ciency and can be a factor

The completion of the VIG rail expansion is almost complete. in driving this business in Virginia. When that equipment/sup-

What percentage of your total cargo (TEU’s) depart and ar- port/infrastructure is readily available in the market, it creates rive via rail (as opposed to trucks)? opportunities for exports and we become more competitive on

The work at VIG was completed in May and now we are ad- that side of the business.