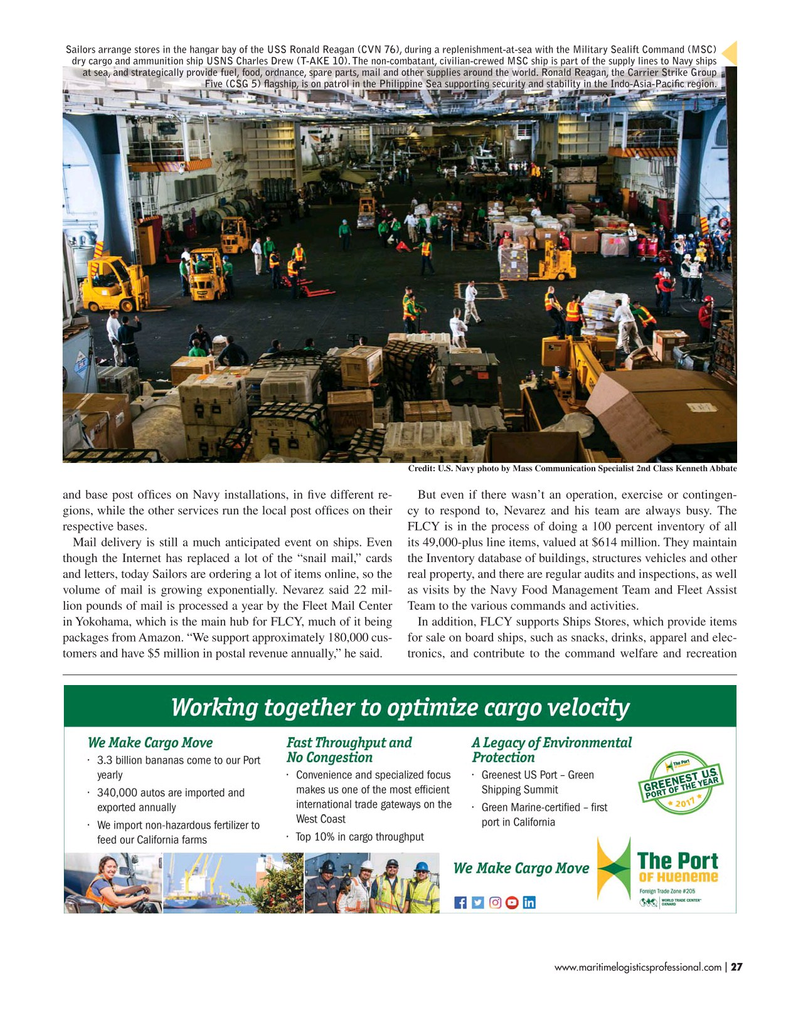 Sailors arrange stores in the hangar bay of the USS Ronald Reagan (CVN 76), during a replenishment-at-sea with the Military Sealift Command (MSC) dry cargo and ammunition ship USNS Charles Drew (T-AKE 10). The non-combatant, civilian-crewed MSC ship is part of the supply lines to Navy ships at sea, and strategically provide fuel, food, ordnance, spare parts, mail and other supplies around the world. Ronald Reagan, the Carrier Strike Group

Five (CSG 5) fagship, is on patrol in the Philippine Sea supporting security and stability in the Indo-Asia-Pacifc region.

Credit: U.S. Navy photo by Mass Communication Specialist 2nd Class Kenneth Abbate and base post of?ces on Navy installations, in ?ve different re- But even if there wasn’t an operation, exercise or contingen- gions, while the other services run the local post of?ces on their cy to respond to, Nevarez and his team are always busy. The respective bases. FLCY is in the process of doing a 100 percent inventory of all

Mail delivery is still a much anticipated event on ships. Even its 49,000-plus line items, valued at $614 million. They maintain though the Internet has replaced a lot of the “snail mail,” cards the Inventory database of buildings, structures vehicles and other and letters, today Sailors are ordering a lot of items online, so the real property, and there are regular audits and inspections, as well volume of mail is growing exponentially. Nevarez said 22 mil- as visits by the Navy Food Management Team and Fleet Assist lion pounds of mail is processed a year by the Fleet Mail Center Team to the various commands and activities. in Yokohama, which is the main hub for FLCY, much of it being In addition, FLCY supports Ships Stores, which provide items packages from Amazon. “We support approximately 180,000 cus- for sale on board ships, such as snacks, drinks, apparel and elec- tomers and have $5 million in postal revenue annually,” he said. tronics, and contribute to the command welfare and recreation www.maritimelogisticsprofessional.com 27