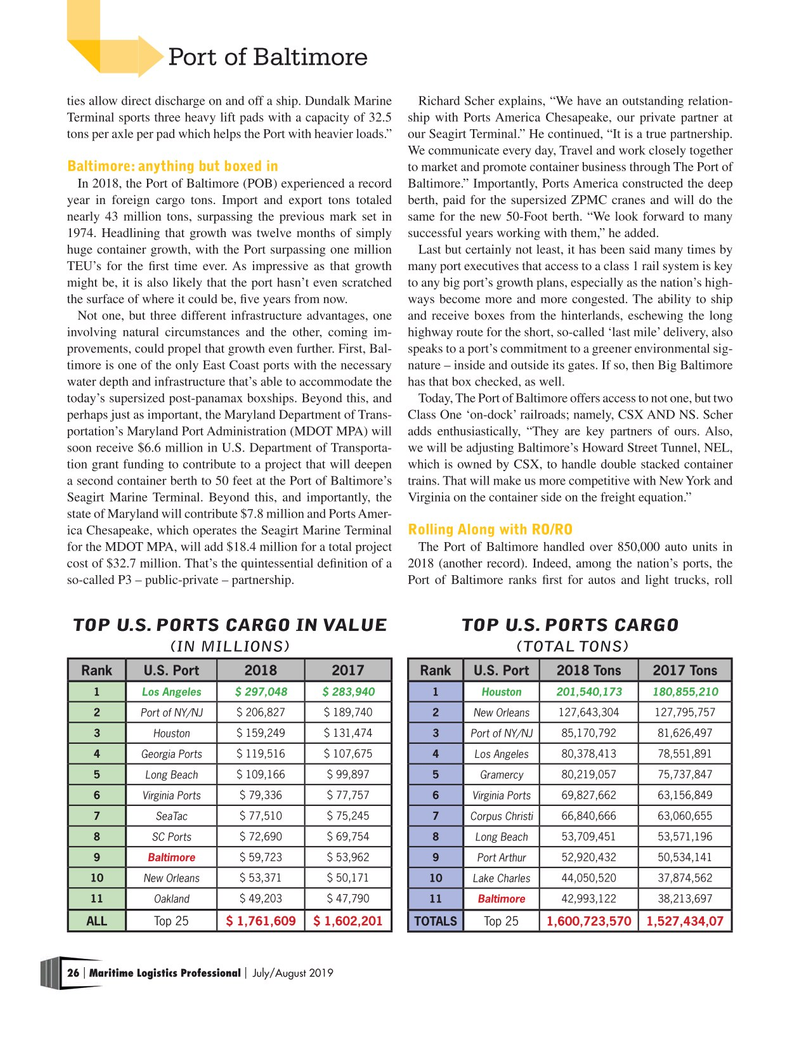 Port of Baltimore ties allow direct discharge on and off a ship. Dundalk Marine Richard Scher explains, “We have an outstanding relation-

Terminal sports three heavy lift pads with a capacity of 32.5 ship with Ports America Chesapeake, our private partner at tons per axle per pad which helps the Port with heavier loads.” our Seagirt Terminal.” He continued, “It is a true partnership.

We communicate every day, Travel and work closely together

Baltimore: anything but boxed in to market and promote container business through The Port of

In 2018, the Port of Baltimore (POB) experienced a record Baltimore.” Importantly, Ports America constructed the deep year in foreign cargo tons. Import and export tons totaled berth, paid for the supersized ZPMC cranes and will do the nearly 43 million tons, surpassing the previous mark set in same for the new 50-Foot berth. “We look forward to many 1974. Headlining that growth was twelve months of simply successful years working with them,” he added. huge container growth, with the Port surpassing one million Last but certainly not least, it has been said many times by

TEU’s for the ? rst time ever. As impressive as that growth many port executives that access to a class 1 rail system is key might be, it is also likely that the port hasn’t even scratched to any big port’s growth plans, especially as the nation’s high- the surface of where it could be, ? ve years from now. ways become more and more congested. The ability to ship

Not one, but three different infrastructure advantages, one and receive boxes from the hinterlands, eschewing the long involving natural circumstances and the other, coming im- highway route for the short, so-called ‘last mile’ delivery, also provements, could propel that growth even further. First, Bal- speaks to a port’s commitment to a greener environmental sig- timore is one of the only East Coast ports with the necessary nature – inside and outside its gates. If so, then Big Baltimore water depth and infrastructure that’s able to accommodate the has that box checked, as well.

today’s supersized post-panamax boxships. Beyond this, and Today, The Port of Baltimore offers access to not one, but two perhaps just as important, the Maryland Department of Trans- Class One ‘on-dock’ railroads; namely, CSX AND NS. Scher portation’s Maryland Port Administration (MDOT MPA) will adds enthusiastically, “They are key partners of ours. Also, soon receive $6.6 million in U.S. Department of Transporta- we will be adjusting Baltimore’s Howard Street Tunnel, NEL, tion grant funding to contribute to a project that will deepen which is owned by CSX, to handle double stacked container a second container berth to 50 feet at the Port of Baltimore’s trains. That will make us more competitive with New York and

Seagirt Marine Terminal. Beyond this, and importantly, the Virginia on the container side on the freight equation.” state of Maryland will contribute $7.8 million and Ports Amer- ica Chesapeake, which operates the Seagirt Marine Terminal Rolling Along with RO/RO for the MDOT MPA, will add $18.4 million for a total project The Port of Baltimore handled over 850,000 auto units in cost of $32.7 million. That’s the quintessential de? nition of a 2018 (another record). Indeed, among the nation’s ports, the so-called P3 – public-private – partnership. Port of Baltimore ranks ? rst for autos and light trucks, roll