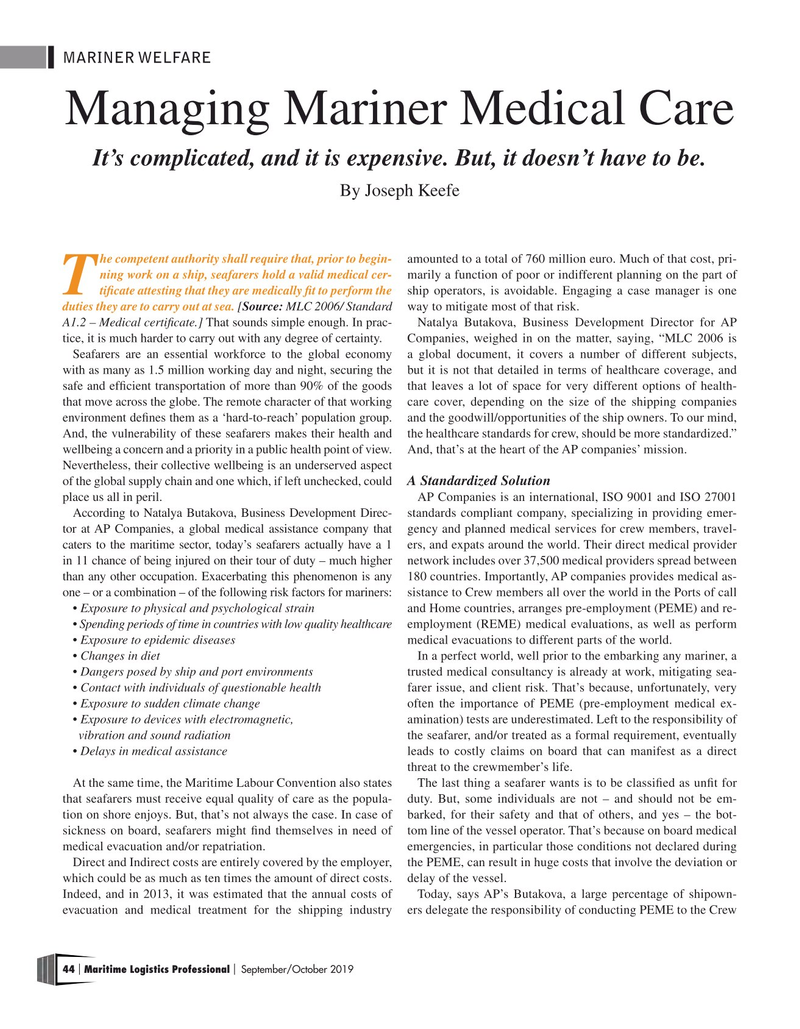 It’s complicated, and it is expensive. But, it doesn’t have to be.

By Joseph Keefe he competent authority shall require that, prior to begin- amounted to a total of 760 million euro. Much of that cost, pri- ning w ork on a ship, seafarers hold a valid medical cer- marily a function of poor or indifferent planning on the part of

T tifcate attesting that they are medically ft to perform the ship operators, is avoidable. Engaging a case manager is one duties they are to carry out at sea. [Source: MLC 2006/ Standard way to mitigate most of that risk.

A1.2 – Medical certifcate.] That sounds simple enough. In prac- Natalya Butakova, Business Development Director for AP tice, it is much harder to carry out with any degree of certainty. Companies, weighed in on the matter, saying, “MLC 2006 is

Seafarers are an essential workforce to the global economy a global document, it covers a number of different subjects, with as many as 1.5 million working day and night, securing the but it is not that detailed in terms of healthcare coverage, and safe and effcient transportation of more than 90% of the goods that leaves a lot of space for very different options of health- that move across the globe. The remote character of that working care cover, depending on the size of the shipping companies environment defnes them as a ‘hard-to-reach’ population group. and the goodwill/opportunities of the ship owners. To our mind,

And, the vulnerability of these seafarers makes their health and the healthcare standards for crew, should be more standardized.” wellbeing a concern and a priority in a public health point of view. And, that’s at the heart of the AP companies’ mission.

Nevertheless, their collective wellbeing is an underserved aspect of the global supply chain and one which, if left unchecked, could

A Standardized Solution place us all in peril. AP Companies is an international, ISO 9001 and ISO 27001

According to Natalya Butakova, Business Development Direc- standards compliant company, specializing in providing emer- tor at AP Companies, a global medical assistance company that gency and planned medical services for crew members, travel- caters to the maritime sector, today’s seafarers actually have a 1 ers, and expats around the world. Their direct medical provider in 11 chance of being injured on their tour of duty – much higher network includes over 37,500 medical providers spread between than any other occupation. Exacerbating this phenomenon is any 180 countries. Importantly, AP companies provides medical as- one – or a combination – of the following risk factors for mariners: sistance to Crew members all over the world in the Ports of call • Exposure to physical and psychological strain and Home countries, arranges pre-employment (PEME) and re- • Spending periods of time in countries with low quality healthcare employment (REME) medical evaluations, as well as perform • Exposure to epidemic diseases medical evacuations to different parts of the world.

• Changes in diet In a perfect world, well prior to the embarking any mariner, a • Dangers posed by ship and port environments trusted medical consultancy is already at work, mitigating sea- • Contact with individuals of questionable health farer issue, and client risk. That’s because, unfortunately, very • Exposure to sudden climate change often the importance of PEME (pre-employment medical ex- • Exposure to devices with electromagnetic, amination) tests are underestimated. Left to the responsibility of vibration and sound radiation the seafarer, and/or treated as a formal requirement, eventually • Delays in medical assistance leads to costly claims on board that can manifest as a direct threat to the crewmember’s life.

At the same time, the Maritime Labour Convention also states The last thing a seafarer wants is to be classifed as unft for that seafarers must receive equal quality of care as the popula- duty. But, some individuals are not – and should not be em- tion on shore enjoys. But, that’s not always the case. In case of barked, for their safety and that of others, and yes – the bot- sickness on board, seafarers might fnd themselves in need of tom line of the vessel operator. That’s because on board medical medical evacuation and/or repatriation. emergencies, in particular those conditions not declared during

Direct and Indirect costs are entirely covered by the employer, the PEME, can result in huge costs that involve the deviation or which could be as much as ten times the amount of direct costs. delay of the vessel.

Indeed, and in 2013, it was estimated that the annual costs of Today, says AP’s Butakova, a large percentage of shipown- evacuation and medical treatment for the shipping industry ers delegate the responsibility of conducting PEME to the Crew 44 Maritime Logistics Professional September/October 2019 | |