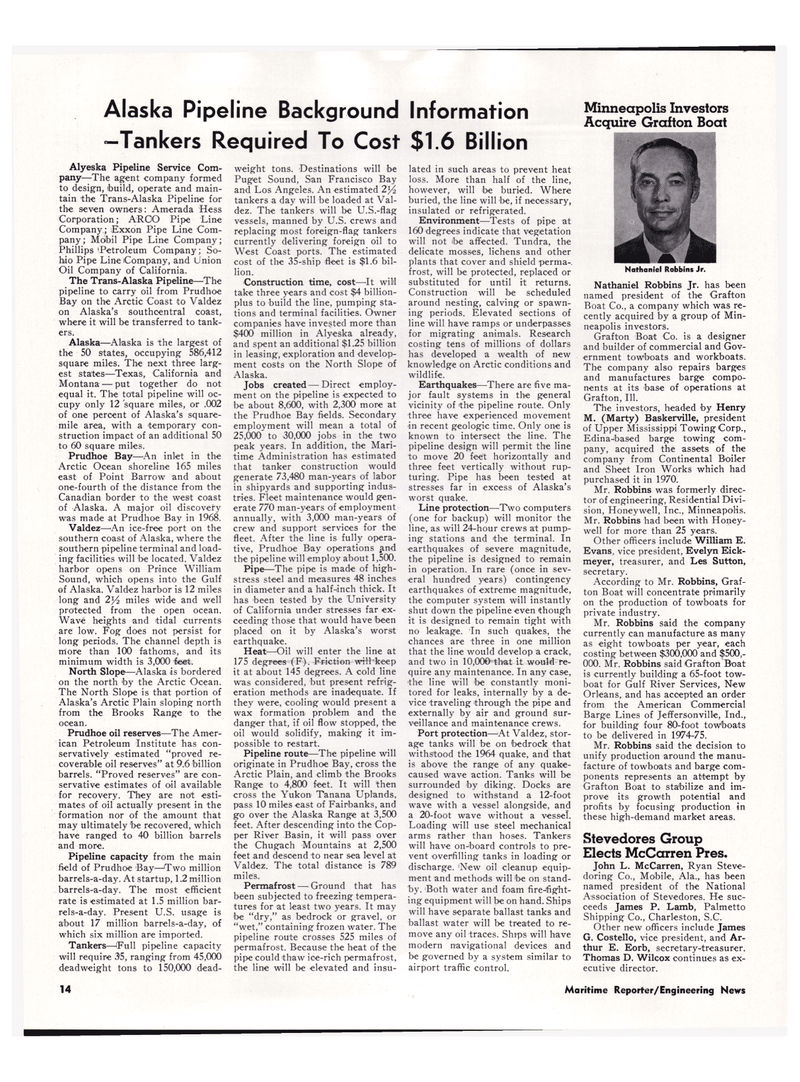 The Trans-Alaska Pipeline—The pipeline to carry oil from Prudhoe

Bay on the Arctic Coast to Valdez on Alaska's southcentral coast, where it will be transferred to tank- ers.

Alaska—Alaska is the largest of the 50 states, occupying 586,412 square miles. The next three larg- est states—Texas, California and

Montana — put together do not equal it. The total pipeline will oc- cupy only 12 square miles, or .002 of one percent of Alaska's square- mile area, with a temporary con- struction impact of an additional 50 to 60 square miles.

Prudhoe Bay—An inlet in the

Canadian border to the west coast of Alaska. A major oil discovery was made at Prudhoe Bay in 1968.

Valdez—An ice-free port on the southern coast of Alaska, where the southern pipeline terminal and load- ing facilities will be located. Valdez harbor opens on Prince William

Sound, which opens into the Gulf of Alaska. Valdez harbor is 12 miles long and 2]/2 miles wide and well protected from the open ocean.

Wave heights and tidal currents are low. Fog does not persist for long periods. The channel depth is more than 100 fathoms, and its minimum width is 3,000 feet.

North Slope—Alaska -is bordered on the north by the Arctic Ocean.

The North Slope is that portion of

Alaska's Arctic Plain sloping north from the Brooks Range to the ocean.

Prudhoe oil reserves—The Amer- ican Petroleum Institute has con- servatively estimated "proved re- coverable oil reserves" at 9.6 billion barrels. "Proved reserves" are con- servative estimates of oil available for recovery. They are not esti- mates of oil actually present in the formation nor of the amount that may ultimately be recovered, which have ranged to 40 billion barrels and more.

Tankers—Full pipeline capacity will require 3'5, ranging from 45,000 deadweight tons to 150,000 dead- weight tons. Destinations will be

Puget Sound, San Francisco Bay and Los Angeles. An estimated 2Yi tankers a day will be loaded at Val- dez. The tankers will be U.S.-flag vessels, manned by U.S. crews and replacing most foreign-flag tankers currently delivering foreign oil to

Construction time, cost—It will take three years and cost $4 billion- plus to build the line, pumping sta- tions and terminal facilities. Owner companies have invested more than $400 million in Alyeska already, and spent an additional $1.25 billion in leasing, exploration and develop- ment costs on the North Slope of

Jobs created — Direct employ- ment on the pipeline is expected to be about 8,600, with 2,300 more at the Prudhoe Bay fields. Secondary employment will mean a total of 25,000 to 30,000 jobs in the two peak years. In addition, the Mari- time Administration has estimated that tanker construction would generate 73,480 man-years of labor in shipyards and supporting indus- tries. Fleet maintenance would gen- erate 770 man-years of employment annually, with 3,000 man-years of crew and support services for the fleet. After the line is fully opera- tive, Prudhoe Bay operations ^nd the pipeline will employ about 1,500.

Heat—'Oil will enter the line at 175 degrees (F). Friction will keep it at about 145 degrees. A cold line was considered, but present refrig- eration methods are inadequate. If they were, cooling would present a wax formation problem and the danger that, if oil flow stopped, the oil would solidify, making it im- possible to restart.

Pipeline route—The pipeline will originate in Prudhoe Bay, cross the

Arctic Plain, and climb the Brooks

Range to 4,800 feet. It will then cross the Yukon Tanana Uplands, pass 10 miles east of Fairbanks, and go over the Alaska Range at 3,500 feet. After descending into the Cop- per River Basin, it will pass over the Chugach Mountains at 2,500 feet and descend to near sea level at

Valdez. The total distance is 789 miles.

Permafrost—Ground that has been subjected to freezing tempera- tures for at least two years. It may be "dry," as bedrock or gravel, or "wet," containing frozen water. The pipeline route crosses 525 miles of permafrost. Because the heat of the pipe could thaw ice-rich permafrost, the line will be elevated and insu- lated in such areas to prevent heat loss. More than half of the line, however, will be buried. Where buried, the line will be, if necessary, insulated or refrigerated.

Environment—Tests of pipe at 160 degrees indicate that vegetation will not be affected. Tundra, the delicate mosses, lichens and other plants that cover and shield perma-. frost, will be protected, replaced or substituted for until it returns.

Construction will be scheduled around nesting, calving or spawn- ing periods. Elevated sections of line will have ramps or underpasses for migrating animals. Research costing tens of millions of dollars has developed a wealth of new knowledge on Arctic conditions and wildlife.

Earthquakes—There are five ma- jor fault systems in the general vicinity of 'the pipeline route. Only three have experienced movement in recent geologic time. Only one is known to intersect the line. The pipeline design will permit the line to move 20 feet horizontally and three feet vertically without rup- turing. Pipe has been tested at stresses far in excess of Alaska's worst quake.

Line protection—Two computers (one for backup) will monitor the line, as will 24-hour crews at pump- ing stations and the terminal. In earthquakes of severe magnitude, the pipeline is designed to remain in operation. In rare (once in sev- eral hundred years) contingency earthquakes of extreme magnitude, the computer system will instantly shut down the pipeline even though it is designed to remain tight with no leakage. In such quakes, the chances are three in one million that the line would develop a crack, and two in 10,000~that it would re- quire any maintenance. In any case, the line will be constantly moni- tored for leaks, internally by a de- vice traveling through the pipe and externally by air and ground sur- veillance and maintenance crews.

Port protection—At Valdez, stor- age tanks will be on 'bedrock that withstood the 1964 quake, and that is above the range of any quake- caused wave action. Tanks will be surrounded by diking. Docks are designed to withstand a 12-foot wave with a vessel alongside, and a 20-foot wave without a vessel.

Loading will use steel mechanical arms rather than hoses. Tankers will have on-board controls to pre- vent overfilling tanks in loading or discharge. 'New oil cleanup equip- ment and methods will be on stand- by. 'Both water and foam fire-ifight- ing equipment will be on hand. Ships will have separate ballast tanks and ballast water will be treated to re- move any oil traces. Ships will have modern navigational devices and be governed by a system similar to airport traffic control.

Nathaniel Robbins Jr. has been named president of the Grafton

Boat Co., a company which was re- cently acquired by a group of Min- neapolis investors.

Grafton Boat Co. is a designer and builder of commercial and Gov- ernment towboats and workboats.

The investors, headed by Henry

Edina-based barge towing com- pany, acquired the assets of the company from Continental Boiler and Sheet Iron Works which had purchased it in 1970.

Mr. Robbins had been with Honey- well for more than 25 years.

Other officers include William E.

According to Mr. Robbins, Graf- ton Boat will concentrate primarily on the production of towboats for private industry.

Mr. Robbins said the company currently can manufacture as many as eight towboats per year, each costing between $300,000 and $500,- 000. Mr. Robbins said Grafton Boat is currently building a 65-foot tow- boat for Gulf River Services, New

Orleans, and has accepted an order from the American Commercial

Barge Lines of Jeffersonville, Ind., for building four 80-foot towboats to be delivered in 1974-75.

Mr. Robbins said the decision to unify production around the manu- facture of towboats and barge com- ponents represents an attempt by

Grafton Boat to stabilize and im- prove its growth potential and profits by focusing production in these high-demand market areas.

John L. McCarren, Ryan Steve- doring Co., Mobile, Ala., has been named president of the National

Other new officers include James