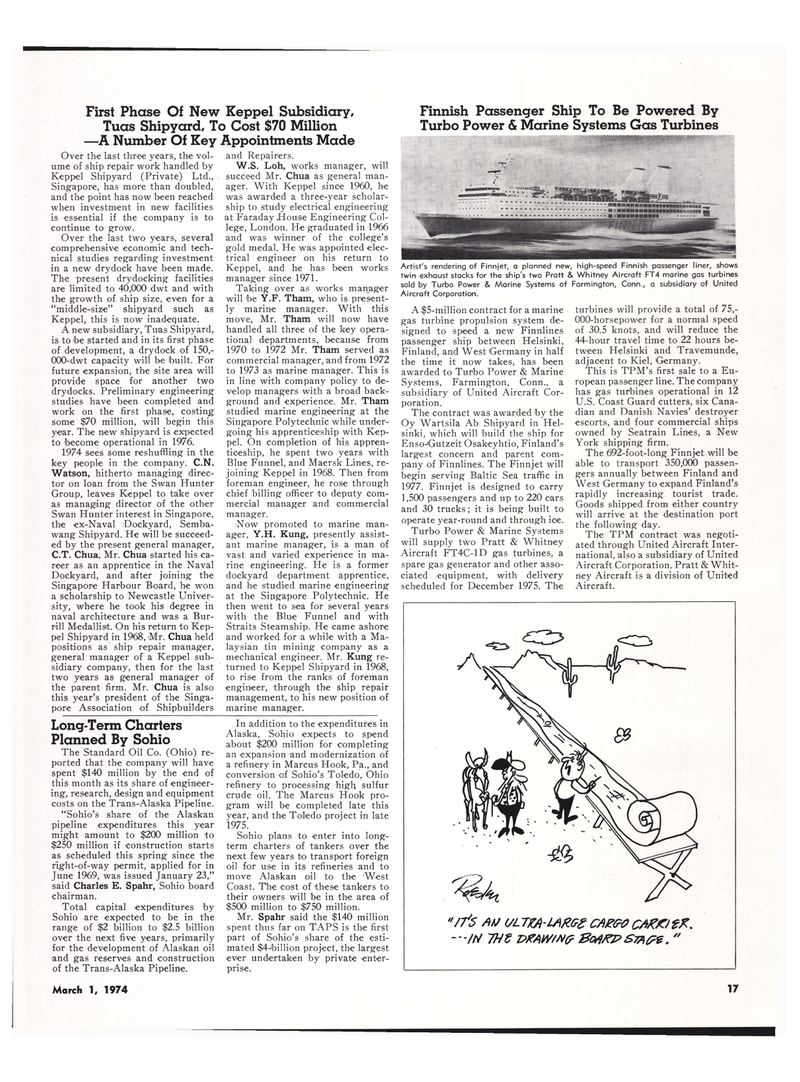 The Standard Oil Co. (Ohio) re- ported that the company will have spent $140 million by the end of this month as its share of engineer- ing, research, design and equipment costs on the Trans-Alaska Pipeline. "Sohio's share of the Alaskan pipeline expenditures this year might amount to $200 million to $250 million if construction starts as scheduled this spring since the right-of-way permit, applied for in

Sohio are expected to be in the range of $2 billion to $2.5 billion over the next five years, primarily for the development of Alaskan oil and gas reserves and construction of the Trans-Alaska Pipeline.

In addition to the expenditures in

Alaska, Sohio expects to spend about $200 million for completing an expansion and modernization of a refinery in Marcus Hook, Pa., and conversion of Sohio's Toledo, Ohio refinery to processing high sulfur crude oil. The Marcus Hook pro- gram will be completed late this year, and the Toledo project in late 1975.

Coast. The cost of these tankers to their owners will be in the area of $500 million to $750 million.

Mr. Spahr said the $140 million spent thus far on TAPS is the first part of Sohio's share of the esti- mated $4-

Finland, and West Germany in half the time it now takes, has been awarded to Turbo Power & Marine

The contract was awarded 'by the

Oy Wartsila Ab Shipyard in Hel- sinki, which will 'build the ship for

Enso-iGutzeit Osakeyhtio, Finland's largest concern and parent com- pany of Finnlines. The Finnjet will begin serving Baltic Sea traffic in 1977. Finnjet is designed to carry 1,500 passengers and up to 220 cars and 30 trucks; it is being built to operate year-round and through ice.

Aircraft FT4C-1D gas turbines, a spare gas generator and other asso- ciated equipment, with delivery scheduled for December 1975. The turbines will provide a total of 75,- 000-horsepower for a normal speed of 30.5 knots, and will reduce the 44-hour travel time to 22 hours be- tween Helsinki and Travemunde, adjacent to Kiel, 'Germany.

This is TPM's first sale to a Eu- ropean passenger line. The company has gas turbines operational in 12

The 692-foot-long Finnjet will be able to transport 350,000 passen- gers annually between Finland and

Goods shipped from either country will arrive at the destination port the following day.

The TPM contract was negoti- ated through United Aircraft Inter- national, also a subsidiary of United

Tuas Shipyard, To Cost $70 Million —A Number Of Key Appointments Made

Over the last three years, the vol- ume of ship repair work handled 'by

Singapore, has more than doubled, and the point has now been reached when investment in new facilities is essential if the company is to continue to grow.

Over the last two years, several comprehensive economic and tech- nical studies regarding investment in a new drydock have been made.

The present drydocking facilities are limited to 40,000 dwt and with the growth of ship size, even for a "middle-size" shipyard such as

Keppel, this is now inadequate.

A new subsidiary, Tuas Shipyard, is to 'be started and in its first phase of development, a drydock of 150,- 000-dwt capacity will be Ibuilt. For future expansion, the site area will provide space for another two drydocks. Preliminary engineering studies have been completed and work on the first phase, costing some $70 million, will begin this year. The new shipyard is expected to 'become operational in 1976. 1974 sees some reshuffling in the key people in the company. C.N.

Group, leaves Keppel to take over as managing director of the other

Swan Hunter interest in Singapore, the ex-Naval Dockyard, Semba- wang Shipyard. He will be succeed- ed by the present general manager,

C.T. Chua. Mr. Chua started his ca- reer as an apprentice in the Naval

Dockyard, and after joining the

Singapore Harbour Board, he won a scholarship to Newcastle Univer- sity, where he took his degree in naval architecture and was a Bur- rill Medallist. On his return to Kep- pel Shipyard in 1968, Mr. Chua held positions as ship repair manager, general manager of a Keppel sub- sidiary company, then for the last two years as general manager of the parent firm. Mr. Chua is also this year's president of the Singa- pore Association of Shipbuilders and Repairers.

W.S. Loh, works manager, will succeed Mr. Chua as general man- ager. With Keppel since 1960, he was awarded a three-year scholar- ship to study electrical engineering at Faraday House Engineering Col- lege, London. He graduated in 1966 and was winner of the college's gold medal. He was appointed elec- trical engineer on his return to

Keppel, and he has been works manager since 1971.

Taking over as works manager will 'be Y.F. Tham, who is present- ly marine manager. With this move, Mr. Tham will now have handled all three of the key opera- tional1 departments, because from 1970 to 1972 Mr. Tham served as commercial manager, and from 1972 to 1973 as marine manager. This is in line with company policy to de- velop managers with a broad back- ground and experience. Mr. Tham studied marine engineering at the

Singapore Polytechnic while under- going his apprenticeship with Kep- pel. On completion of his appren- ticeship, he spent two years with

Blue Funnel, and Maersk Lines, re- joining Keppel in 1968. Then from foreman engineer, he rose through chief billing officer to deputy com- mercial manager and commercial manager.

Now promoted to marine man- ager, Y.H. Kung, presently assist- ant marine manager, is a man of vast and varied experience in ma- rine engineering. He is a former dockyard department apprentice, and he studied marine engineering at the Singapore Polytechnic. He then went to sea for several years with the Blue Funnel and with

Straits Steamship. He came ashore and worked for a while with a Ma- laysian tin mining company as a mechanical engineer. Mr. Kung re- turned to Keppel Shipyard in 1968, to rise from the ranks of foreman engineer, through the ship repair management, to his new position of marine manager. «t?S AM ULTZA-IAKGZ CMM CAZftfK. -7N 7HZ VZAW/Mfr S7A&2. "

Finnish Passenger Ship To Be Powered By