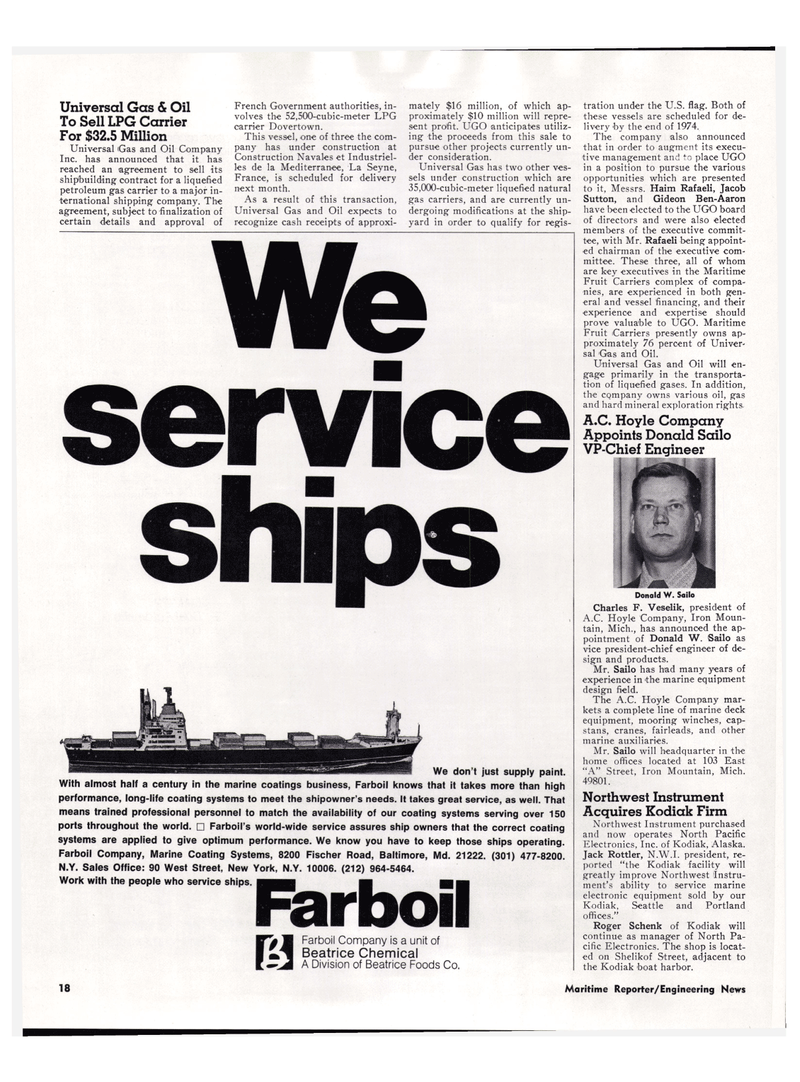 Inc. has announced that it has reached an agreement to sell its shipbuilding contract for a liquefied petroleum gas carrier to a major in- ternational shipping company. The agreement, subject to finalization of certain details and approval of

This vessel, one of three the com- pany has under construction at

France, is scheduled for delivery next month.

As a result of this transaction,

Universal Gas has two other ves- sels under construction which are 35,000-cubic-meter liquefied natural gas carriers, and are currently un- dergoing modifications at the ship- yard in order to qualify for regis- tration under the U.S. flag. Both of these vessels are scheduled for de- livery by the end of 1974.

The company also announced that in order to augment its execu- tive management and to place UGO in a position to pursue the various opportunities which are presented to it, Messrs. Haim Rafaeli, Jacob

Sutton, and Gideon Ben-Aaron have been elected to the UGO board of directors and were also elected members of the executive commit- tee, with Mr. Rafaeli being appoint- ed chairman of the executive com- mittee. These three, all of whom are key executives in the Maritime

Fruit Carriers complex of compa- nies, are experienced in both gen- eral and vessel financing, and their experience and expertise should prove valuable to UGO. Maritime

Mr. Sailo has had many years of experience in the marine equipment design field.

Roger Schenk of Kodiak will continue as manager of North Pa- cific Electronics. The shop is locat- ed on Shelikof Street, adjacent to the Kodiak boat harbor. m

Farboil Company is a unit of

With almost half a century in the marine coatings business, Farboil knows that it takes more than high performance, long-life coating systems to meet the shipowner's needs. It takes great service, as well. That means trained professional personnel to match the availability of our coating systems serving over 150 ports throughout the world. • Farboil's world-wide service assures ship owners that the correct coating systems are applied to give optimum performance. We know you have to keep those ships operating.