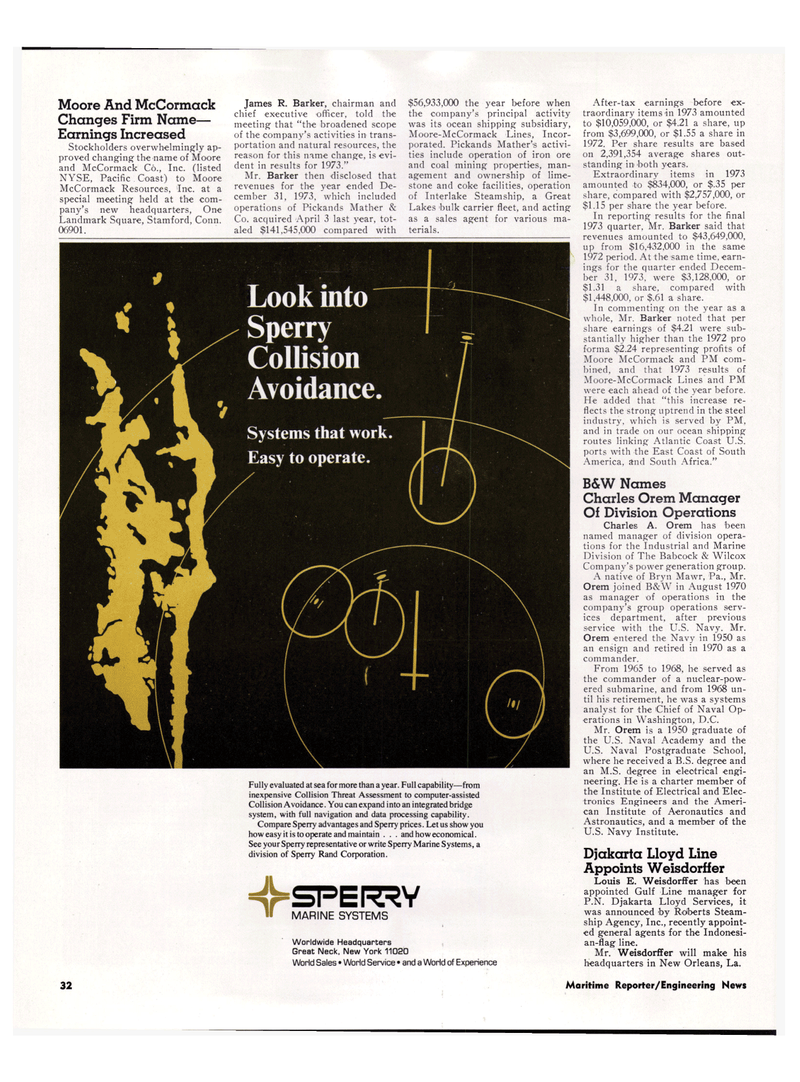 McCormack Resources, Inc. at a special meeting held at the com- pany's new headquarters, One

James R. Barker, chairman and chief executive officer, told the meeting that "the broadened scope of the company's activities in trans- portation and natural resources, the reason for this name change, is evi- dent in results for 1973."

Mr. Barker then disclosed that revenues for the year ended De- cember 31, 1973, which included operations of Pickands Mather &

Collision Avoidance. You can expand into an integrated bridge system, with full navigation and data processing capability.

Compare Sperry advantages and Sperry prices. Let us show you how easy it is to operate and maintain . . . and how economical.

World Sales • World Service • and a World of Experience

In commenting on the year as a whole, Mr. Barker noted that per share earnings of $4.21 were sub- stantially higher than the 1972 pro forma $2.24 representing profits of

Moore McCormack and PM com- bined, and that 1973 results of

Moore-McCormack Lines and PM were each ahead of the year before.

He added that "this increase re- flects the strong uptrend in the steel industry, which is served by PM, and in trade on our ocean shipping routes linking Atlantic Coast U.S. ports with the East Coast of South

Charles A. Orem has been named manager of division opera- tions for the Industrial and Marine

Division of The Babcock & Wilcox

Orem joined B&W in August 1970 as manager of operations in the company's group operations serv- ices department, after previous service with the U.S. Navy. Mr.

From 1965 to 1968, he served as the commander of a nuclear-pow- ered submarine, and from 1968 un- til his retirement, he was a systems analyst for the Chief of Naval Op- erations in Washington, D.C.

U.S. Naval Postgraduate School, where he received a B.S. degree and an M.S. degree in electrical engi- neering. He is a charter member of the Institute of Electrical and Elec- tronics Engineers and the Ameri- can Institute of Aeronautics and

Astronautics, and a member of the

Louis E. Weisdorffer has been appointed Gulf Line manager for