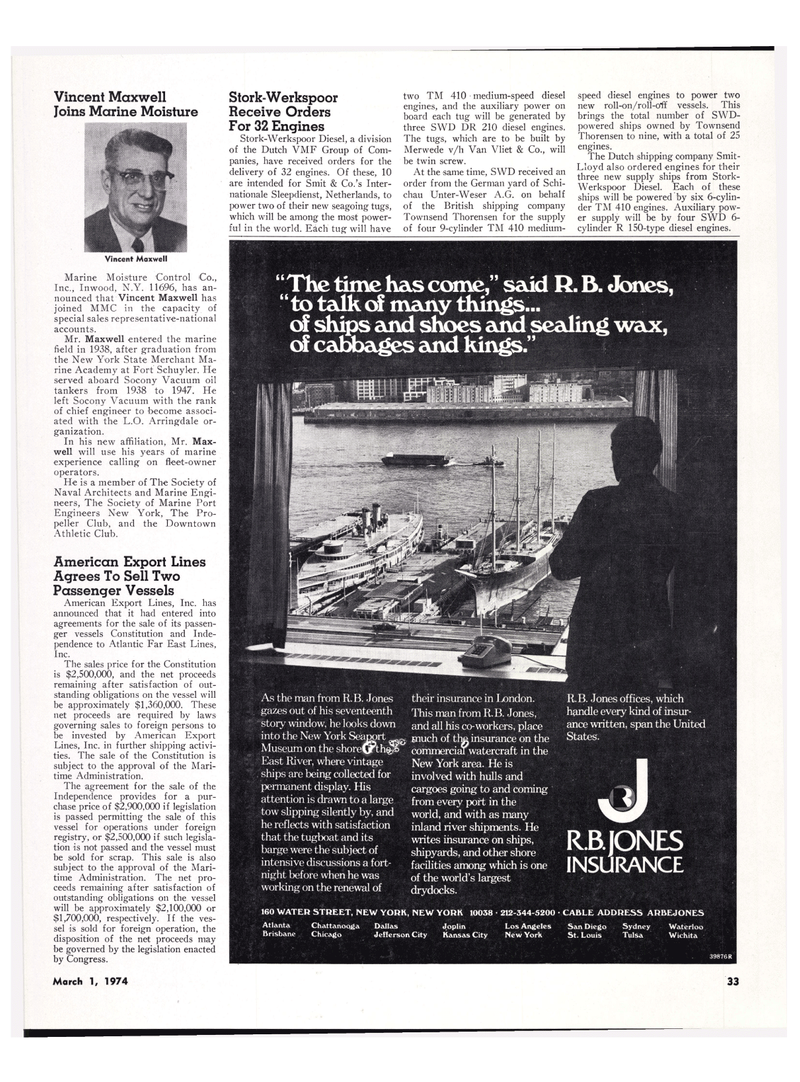 Stork-Werkspoor Diesel, a division of the Dutch VMF Group of Com- panies, have received orders for the delivery of 32 engines. Of these, 10 are intended for Smit & Co.'s Inter- nationale Sleepdienst, Netherlands, to power two of their new seagoing tugs, which will be among the most power- ful in the world. Each tug will have two TM 410 medium-speed diesel engines, and the auxiliary power on board each tug will be generated by three SWD DR 210 diesel engines.

The tugs, which are to be built by

At the same time, SWD received an order from the German yard of Schi- chau Unter-Weser A.G. on behalf of the British shipping company

Thorensen to nine, with a total of 25 engines.

Werkspoor Diesel. Each of these ships will be powered by six 6-cylin- der TM 410 engines. Auxiliary pow- er supply will be by four SWD 6- cylinder R 150-type diesel engines.

Inc., Inwood, N.Y. 11696, has an- nounced that Vincent Maxwell has joined MMC in the capacity of special sales representative-national accounts.

Mr. Maxwell entered the marine field in 1938, after graduation from the New York State Merchant Ma- rine Academy at Fort Schuyler. He served aboard Socony Vacuum oil tankers from 1938 to 1947. He left Socony Vacuum with the rank of chief engineer to become associ- ated with the L.O. Arringdale or- ganization.

In his new affiliation, Mr. Max- well will use his years of marine experience calling on fleet-owner operators.

He is a member of The Society of

Engineers New York, The Pro- peller Club, and the Downtown

American Export Lines, Inc. has announced that it had entered into agreements for the sale of its passen- ger vessels Constitution and Inde- pendence to Atlantic Far East Lines,

The sales price for the Constitution is $2,500,000, and the net proceeds remaining after satisfaction of out- standing obligations on the vessel will be approximately $1,360,000. These net proceeds are required by laws governing sales to foreign persons to be invested by American Export

Lines, Inc. in further shipping activi- ties. The sale of the Constitution is subject to the approval of the Mari- time Administration.

The agreement for the sale of the

Independence provides for a pur- chase price of $2,900,000 if legislation is passed permitting the sale of this vessel for operations under foreign registry, or $2,500,000 if such legisla- tion is not passed and the vessel must be sold for scrap. This sale is also subject to the approval of the Mari- time Administration. The net pro- ceeds remaining after satisfaction of outstanding obligations on the vessel will be approximately $2,100,000 or $1,700,000, respectively. If the ves- sel is sold for foreign operation, the disposition of the net proceeds may be governed by the legislation enacted by Congress. "The time has come," said R. B. Jones, "to talk of many things... of ships and shoes and sealing wax, of cabbages and king$." 160 WATER STREET, NEW YORK, NEW YORK 10038 • 212-344-5200 • CABLE ADDRESS ARBEJONES

As the man from R.B. Jones gazes out of his seventeenth story window, he looks down into the New York Seaport

East River, where vintage . ships are being collected for permanent display. His attention is drawn to a large tow slipping silently by, and he reflects with satisfaction that the tugboat and its barge were the subject of intensive discussions a fort- night before when he was working on the renewal of their insurance in London.

This man from R.B. Jones, and all his co-workers, place much of the insurance on the commercial watercraft in the

New York area. He is involved with hulls and cargoes going to and coming from every port in the world, and with as many inland river shipments. He writes insurance on ships, shipyards, and other shore facilities among which is one of the world's largest drydocks.